Home » Health News » Babies form a memory for grammatical relationships, even without sleep 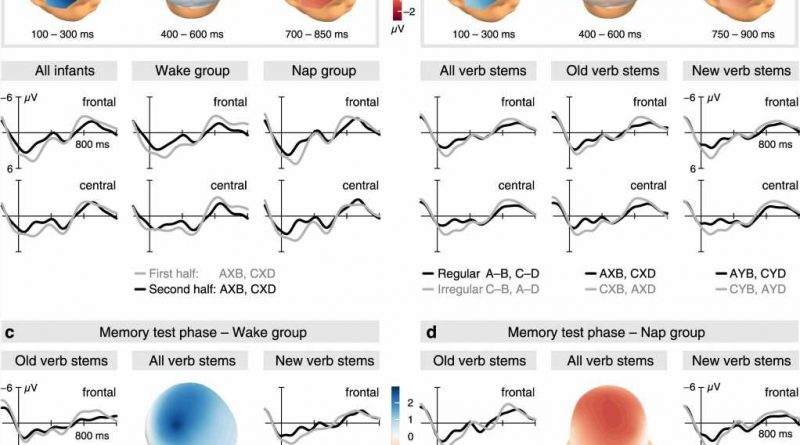 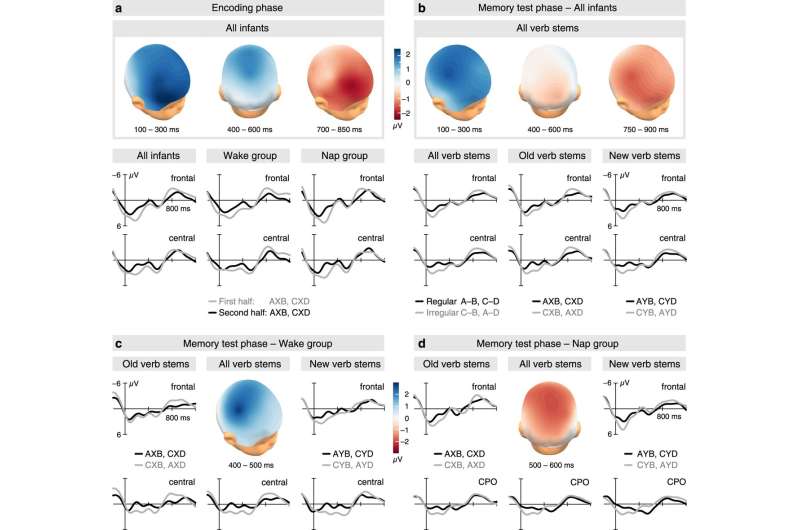 From an early age, children learn to name things and events and also how to combine words according to the rules of their language. Scientists at the Max Planck Institute for Human Cognitive and Brain Sciences (MPI CBS) Leipzig and the Humboldt-Universität zu Berlin have now found that even six-month-old babies store relationships between speech elements in memory.

Long before children understand the rules of their mother tongue, they already use them unconsciously and can produce grammatically correct sentences. To do this, the infant brain must first detect the regular relationships between speech elements and store them in memory in some form.

According to a recent study, published in the journal Nature Communications, this already begins in the first year of life. Neuroscientists from Berlin, Leipzig, Lübeck and Tübingen have shown that six- to eight-month-old babies very quickly form a memory for the regular relationships between speech elements—even when the elements do not directly follow one another but are separated by another variable element.

In the study, the researchers measured the brain response of 85 babies from monolingual German families while they listened to short Italian sentences for 10 minutes each in a learning phase and a later test phase. In the sentences of the learning phase, the words sta and può always occurred with a given ending (–ando or –are) of the following verb (e.g., La sorella sta parlando, or Il fratello può cantare.), while the intervening verb stems (e.g., parl or cant) varied.

In the test phase about an hour later, the researchers presented similar sentences to the babies, this time with both the correct combinations of the learning phase (sta … –ando and può … –are) and with incorrect, reversed combinations (sta … –are and può … –ando). Half of the sentences contained the old verb stems already heard in the learning phase, the other half new verb stems that the babies had never heard before.

And because earlier baby studies had shown that the memory for word meanings depends crucially on sleep, the times for the learning phase were scheduled according to the children’s individual sleep routines. Children in one group took a nap between the learning and test phases and those in another stayed awake until the test phase.

The brain responses of the babies in the test phase showed clear differences between the correct and incorrect combinations in both groups. From this, the researchers concluded that the infant brain can store the relationship between the speech elements and—unlike the memory for word meanings—does so regardless of whether or not a baby naps immediately after learning.

The two memory effects found equally in the sleep and wake groups occurred for sentences with old verb stems as well as for those with new ones. This means that babies can generalize their knowledge and expect the correct element of a learned speech combination even when they hear a completely new verb stem.

“Our results show that children as young as six months have memory mechanisms relevant to grammar learning,” summarizes Angela D. Friederici, senior author of the study and director at MPI CBS. “Moreover, they provide a first indication that the earliest mechanisms of grammar learning are different from those of learning word meanings.”

However, there was another effect in the babies’ brain responses. And this differed between the sleep group and the wake group. While the wake group showed very similar effects in the learning and test phases, the brain response of the sleep group changed from the learning to the test phase. “We assume that this new memory effect after sleep is due to a newly formed memory during sleep,” explains Manuela Friedrich, first author of the study.

“The type of response suggests that the memory evolves during sleep and the infant brain stores the regular relationships in a new form after napping.” For example, connections of related sound patterns formed in the learning phase could be transferred during sleep to language areas of the brain and stored there as related language units, while infants who have stayed awake continue to link only the sound patterns.

“Apparently, sleep affects the way in which knowledge about relationships in language is stored in memory,” says Manuela Friedrich. “This means that while sleep is not necessary for babies’ unconscious grammar knowledge, it can trigger changes in the nature of the underlying memory.”