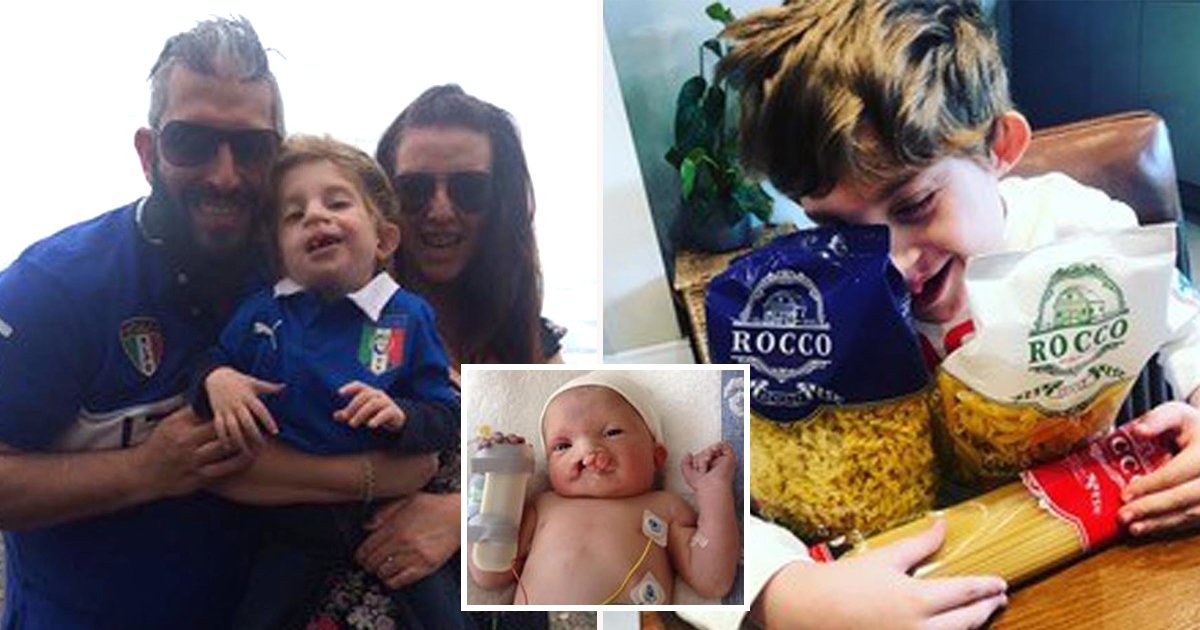 A couple are doing their bit to thank the hospital that gave their son life-saving surgery.

Aldo Chiappette, 40 and his wife, Sarah, 48 weren’t sure if their son Rocco would ‘pull through’ after he was born.

The pair, from Berkshire, welcomed their new arrival at London’s St Thomas’ Hospital on 29 May 2012.

But medics explained that Rocco had a whole host of problems – including an ultra-rare genetic condition causing three life-threatening heart defects.

This was more heartbreaking news for the parents, who found out Rocco had other health problems during pregnancy.

Sarah said: ‘I was already terrified when we found out about the cleft lip and palette at my 20-week scan.

‘I cried for 28 hours and thought it was the worst thing that could happen. We made the mistake of Googling it and obviously we saw all the horror stories.

‘Then, when a further scan just weeks later revealed heart defects and that Rocco may have complications when born I was devastated.

‘It was terrifying, we just didn’t know what Rocco’s life would be like. But what we did know is we wanted him no matter what.’

Sarah was induced two weeks early to give Rocco the medical care he needed for his heart as quickly as possible.

This was essential as Rocco was born with his main arteries reversed (leaving him with a shortage of oxygen in the blood) and holes between heart chambers, as well as a bicuspid pulmonary valve – which meant his heart struggled to pump blood around the body.

Sarah said: ‘We knew he needed help to pump his heart, but being apart was really difficult. We lived an hour and a half away from the hospital, but were given somewhere to stay by the Ronald McDonald House Charity.

‘We stayed so close to the hospital that we took it in shifts to be by his bedside, as we never wanted him to be alone.

‘I took the day shifts and Aldo took the evening ones. Rocco didn’t even look human, he looked like a robot because he was covered in wires.’

At three weeks old, Rocco underwent a life-saving operation which meant he could be taken off life support.

The couple were finally able to bring him home, aged six weeks, in July 2012.

Rocco is now healthy and regularly monitored, and Sarah cares for him full-time.

She said: ‘We didn’t know if Rocco would pull through.

‘Now he’s such an amazing little guy. He high fives all the staff at school, I think he thinks he’s a rockstar.’

Now Aldo and Sarah are thanking the hospital for saving their son’s life by making a special NHS pasta and donating the profits.

Sarah said: ‘We wanted to give back to the hospital that saved him so, as Aldo is half Italian and works in food, we decided to donate the profits from a special pasta – which Rocco loves – to them.’

Aldo, an entrepreneur, added: ‘We were racking our brains trying to figure out a way to give back to the people that saved Rocco’s life.

‘I’m half Italian and my family have ensured that Rocco loves pasta. I also discovered it was the most purchased food during the pandemic and thought this would be a brilliant way to raise money.

‘Rocco used to be a picky eater, but now he loves pasta dishes, so it’s really based on something he loves, too.’

Each bag of ROCCO pasta goes to Evelina London Children’s Hospital, NHS Charities Together and the Ronald McDonald House charity.

To help the family raise money for their chosen charities go to roccobrands.com