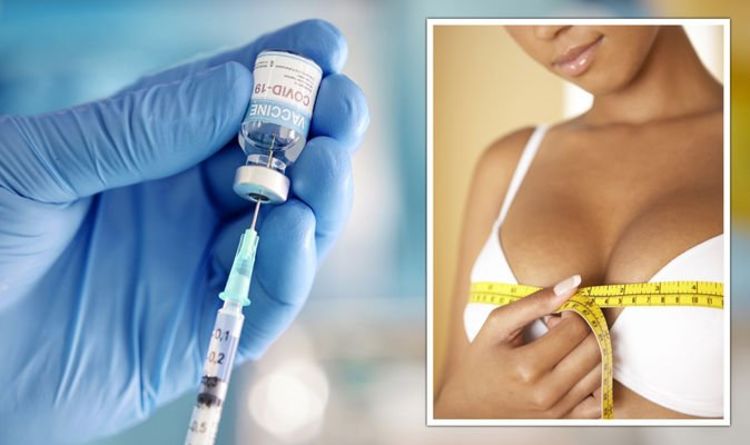 Women who have received the Pfizer vaccine have reported an unexpected side effect – claiming their breasts have grown bigger after having the jab. Social media platforms including TikTok and Twitter, have been inundated with reports from women stating their breasts have “got bigger”, with some wondering whether they were imagining the symptoms. Many have shared their shock at the side effect, dubbed the “Pfizer boob job”.

One Twitter user wrote: “I can confirm from personal experience that the Pfizer does indeed make your boobs grow.”

“I feel like my boobs got bigger because of Pfizer – or am I just hallucinating,” another stated on the social media platform.

Some TikTok users shared videos of their breasts after receiving the jab, with one woman in the UK reporting she had gone up two cup sizes, from an A to a C.

“At first I thought those ‘Pfizer boob job’ memes were a joke but I don’t think it’s a joke anymore,” explained one Twitter user.

READ MORE: Covid symptoms: The five most common signs of coronavirus after having two vaccines

What causes the swelling

When people have vaccines in their upper arm, the lymph nodes on that side of the body are activated, which can cause swelling.

The swelling is a sign that the body is preparing a protective immune response, according to The Conservation.

While it is not clear how long it takes for the swelling in lymph nodes to go down, health experts have noted it is only a ‘temporary effect’.

According to Doctor Laura Dean, MD, swollen lymph nodes are a potential side effect of any vaccine.

“The whole point of the vaccine is to get your immune system to mount a response to whatever the vaccine agent is,” noted Doctor Dean.

“We’re still learning about these vaccines and the side effects as more and more people receive them. We think the swelling of the lymph nodes subsides within a few days.”

Doctor Laura Esserman, director of University of California San Fransisco’s Breast Care Centre, explained that some women were confusing swollen lymph nodes after the vaccine as signs of cancer.

She told ABC7 Chicago: “I’m sure hundreds of thousands of women will be affected by this for sure.”

The Radiological Society of North America advised clinicians, patients and cancer researchers be aware of swelling of the lymph nodes, to help rule out any potential false cancer diagnoses.

They encouraged widespread patient education regarding vaccine-induced lymph swelling, as it could easily be mistaken as a sign of malignancy.

Authors of the study, published in RSNA, stated: “When vaccines are administered, side effects such as axillary swelling should be highlighted and normalised as an immune response initiated by the vaccine.

“News media outlets should spread awareness to educate the public regarding this side effect to minimise patient anxiety.”

Doctor Dean explained: “While the COVID-19 vaccine appears to only cause swelling on one side, swelling in lymph nodes on both sides of the body is not necessarily a sign of cancer.

“You see general lymph node enlargement under the arms, in the chest or groin, with something like lymphoma. But there are other reasons you’d see that too, which are less serious than cancer.”

According to Cleveland Clinic, other causes of swollen lymph nodes include:

More than 46 million people in the UK have now received at least one dose of a coronavirus vaccine.

The Government has said the high vaccination levels have created a “protective wall” sufficient to end all legal restrictions on social contact.

Furthermore, data from Public Health England shows that COVID-19 vaccines have proven highly effective against hospitalisation from the Delta variant.