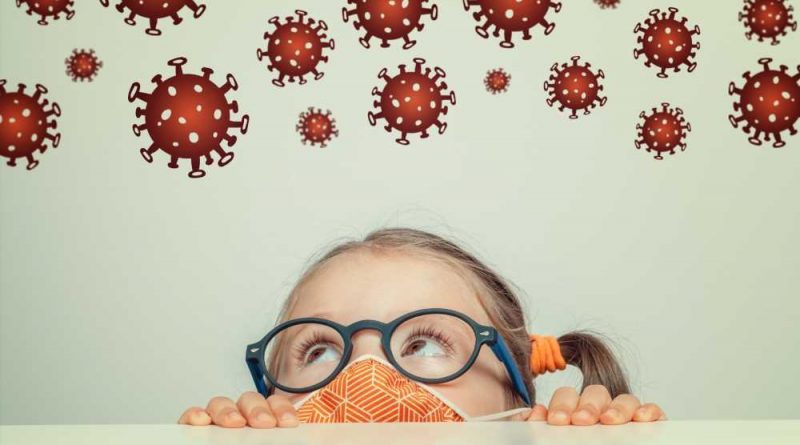 The ongoing coronavirus disease 2019 (COVID-19) pandemic, caused by severe acute respiratory syndrome coronavirus-2 (SARS-CoV-2), has massively affected the global healthcare sector and the economy. Despite adults being mainly affected by the virus, several cases of severe SARS-CoV-2 infection in pediatric patients have been reported. 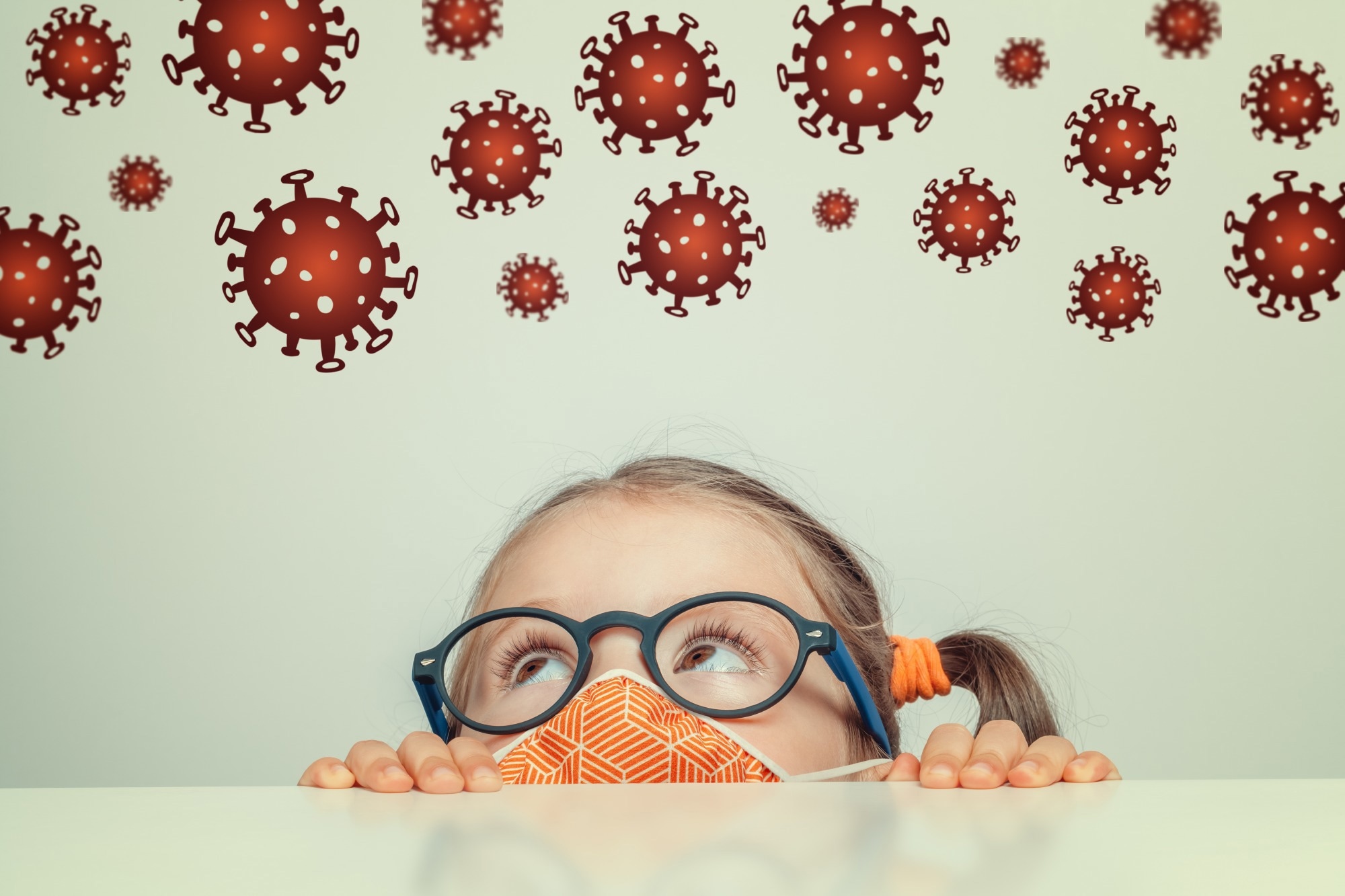 A broad spectrum of clinical symptoms, such as asymptomatic, mild upper respiratory distress, pneumonia, and more severe multisystem inflammatory syndrome in children (MIS-C), have been reported in children infected with SARS-CoV-2. In addition, it was observed that MIS-C mainly occurred 2-6 weeks after acute SARS-CoV-2 infection.

Since the beginning of the pandemic, the evolution of SARS-CoV-2 occurred due to genomic mutations, which led to the emergence of many variants. These variants have been classified as variants of interest (VOI) and variants of concern (VOC) based on their virulence, ability to escape immune responses, and transmissibility compared to the ancestral strain.

Alpha, Delta, and Omicron variants showed substantially higher transmissibility and disproportionally affected unvaccinated individuals and vulnerable groups, such as children. These variants significantly increased pediatric hospitalization by 5-fold to 10-fold, depending on the variant and the child’s age. There is a lack of data on how specific SARS-CoV-2 variants impact the clinical disease severity in adolescents and children with COVID-19.

Nasopharyngeal (NP) samples were collected from children and adolescents who tested positive between January 1, 2021, and January 15, 2022, via nucleic acid amplification tests (NAATs).

All SARS-CoV-2 positive samples were stored at −20°C; however, these were analyzed within a week of storage based on the clinical laboratory testing capability, cycle threshold (Ct) values, and sample volumes. This study used Ct values as a proxy for viral load quantification. Ct value is inversely proportional to quantitative viral load.

The samples were analyzed to detect the presence of mutations characterizing Alpha, Beta, Gamma, Omicron, and other variants. In addition, the authors developed a T487K assay to detect the Delta variant.

The demographic characteristics, comorbidities, the infecting variant type, and SARS-CoV-2 Ct values of the selected inpatients and outpatients were obtained. The participants were grouped based on their underlying medical conditions, including obesity/underweight, genetic, gastrointestinal, renal, endocrine, neurologic immunocompromised disorders, and hematologic diseases. 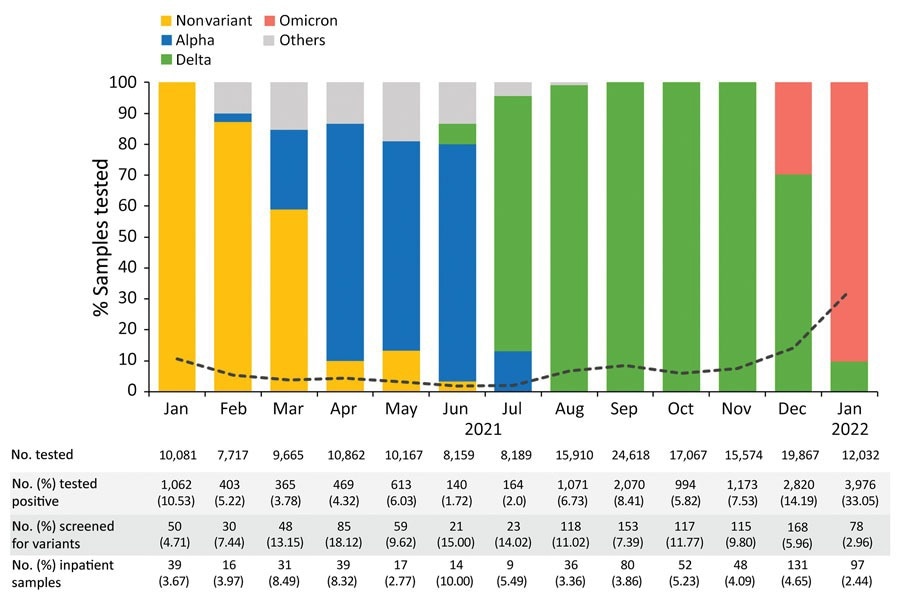 Variants screening revealed the presence of twelve SARS-CoV-2 variants, which included nonvariant strain (11.34%), Alpha (11.81%), Delta (62.77%), and Omicron (10.49%). In addition, other SARS-CoV-2 strains, such as Beta, Zeta, Gamma, Mu, Epsilon, and Eta, were also detected. This finding also revealed that Delta infection was most common in inpatients and outpatients. Likewise, the Alpha and Omicron variant infections were mostly found in outpatients and inpatients.

The median age of inpatients was 6.6 years, and of outpatients was 9.4 years. Interestingly, both settings revealed that SARS-CoV-2 infection was more prevalent in the adolescent group (12–21 years of age) than in younger children. Nevertheless, infants were the second most common group with COVID-19. The COVID-19 vaccination rate was low and did not differ between inpatients and outpatients.

The obesity/overweight condition was the most common underlying comorbidity of the study cohort. SARS-CoV-2/viral coinfections were reported in 19.82% of the study cohort. The most common virus coinfected with COVID-19 was the rhinovirus/enterovirus (RV/EV), followed by the respiratory syncytial virus (RSV), human metapneumovirus, endemic coronavirus, parainfluenza viruses, adenovirus and influenza viruses. Importantly, coinfection was found in children infected with Delta and Omicron variants. Coinfection also enhanced hospital admission.

A key limitation of the study was that all samples that tested SARS-CoV-2 positive by NAAT were not subjected to variant screening. The percentage of sample screening for variant identification was based on samples’ volumes and the availability of skilled personnel at the clonal laboratory. Hence, during the months of high SARS-CoV-2 cases, a smaller number of samples underwent variant testing. Another limitation was the retrospective nature of the data collection, which influenced the findings of the outpatient cohort.

Priyom holds a Ph.D. in Plant Biology and Biotechnology from the University of Madras, India. She is an active researcher and an experienced science writer. Priyom has also co-authored several original research articles that have been published in reputed peer-reviewed journals. She is also an avid reader and an amateur photographer.