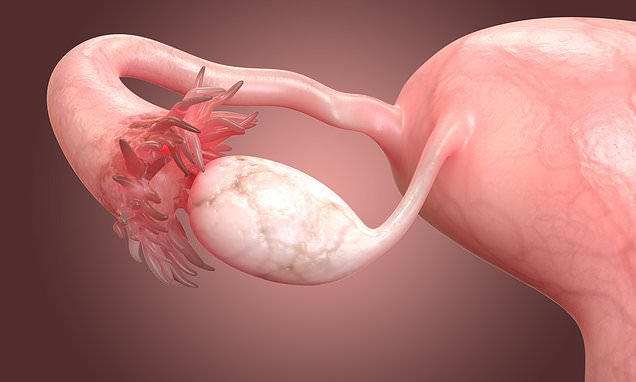 Screening for ovarian cancer moves one step closer after scientists discover six types of cell the trigger the disease.

The never-seen-before cells are in the fallopian tubes, which carry eggs from the ovary to the womb, and where most ovarian cancers begin.

By detecting these abnormal cells in the fallopian tube lining, ovarian cancer could be diagnosed earlier, improving survival rates.

Currently just over a third of English patients live for five years after diagnosis of the ‘silent killer’.

Less than a third are diagnosed at the earliest stage because the symptoms – such as bloating – are so vague.

What’s more, some of the cells indicate which women have the poorest chance of survival who are not benefiting from current treatments. 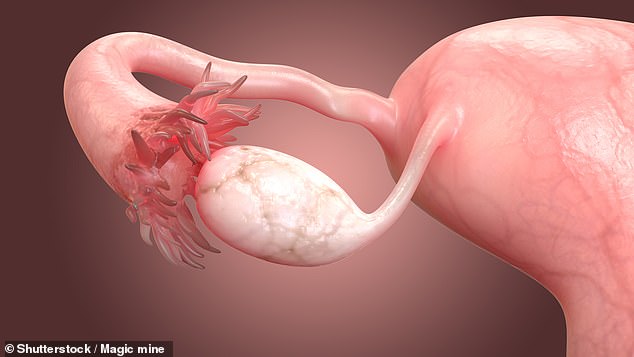 The never-seen-before cells which trigger ovarian cancer were in the fallopian tubes, pictured in an illustration attached to the womb and ovary

Ovarian cancer is the sixth most common cancer in women, with around 7,500 new cases diagnosed in the UK each year and 21,750 in the US.

The research at Oxford University could help slash deaths in the future.

Ovarian Cancer Action, the charity which funded the research, said: ‘These exciting findings take us closer to both a screening tool and personalised treatments – the two key elements we know will transform the lives of women diagnosed with ovarian cancer today and for generations to come.’

Zhiyuan Hu, first author of the paper, said: ‘The discovery of new types of cells sheds new light onto the complexity of ovarian cancers.

‘This research should take us a step closer to identifying the cell of origin of ovarian cancer and to developing a new tool for screening.

‘It also opens the door for similar research for other types of cancers.’

The team at Oxford University analysed 6,000 cells from five women with ovarian cancer, five with endometrial cancer and five who were cancer-free.

Traditional techniques can only look at one group of cells at a time. But the researchers were able to examine individual normal cells from the inner layer of fallopian tubes.

Through this they were able to identify cells which looked like tumour cells taken from the ovaries of around 1,700 women with cancer.

This suggests the tumour has an origin, sometimes referred to as the cancer stem cell.

These ‘sub-types’ of normal fallopian tube cells can be used to figure out what type of cancer a woman has.

The RNA sequencing can identify a particular group of ovarian cancer patients who have the poorest chance of surviving the disease and do not benefit from current treatments.

Focusing on new treatments for this particular group of patients will be an important way to improve overall survival rates, the researchers say.

They hope they will find out what protein is produced by the origin cell as ovarian cancer starts, so they can develop a blood test to look for it.

So for the first time, healthy women might be able to be screened for the sixth most common cancer they face, and thousands more might survive.

Co-author Professor Ahmed Ashour Ahmed said: ‘Identifying the type of cancer cells is an important early step in choosing which drugs and treatments to use because different types of cells respond differently to treatment.

‘The “Oxford Classic”, our new tumour classifier should give us much more accurate predictions for disease outcome in patients as well as helping us to develop targeted therapies for each type of cancer.’

The findings were published in the Cancer Cell journal.

WHY OVARIAN CANCER IS CALLED A ‘SILENT KILLER’

About 80 percent of ovarian cancer cases are diagnosed in the advanced stages of the disease.

At the time of diagnosis, 60 percent of ovarian cancers will have already spread to other parts of the body, bringing the five-year survival rate down to 30 percent from 90 percent in the earliest stage.

It’s diagnosed so late because its location in the pelvis, according to Dr Ronny Drapkin, an associate professor at the University of Pennsylvania, who’s been studying the disease for more than two decades.

‘The pelvis is like a bowl, so a tumor there can grow quite large before it actually becomes noticeable,’ Dr Drapkin told Daily Mail Online.

The first symptoms to arise with ovarian cancer are gastrointestinal because tumors can start to press upward.

When a patient complains of gastrointestinal discomfort, doctors are more likely to focus on diet change and other causes than suggest an ovarian cancer screening.

Dr Drapkin said it’s usually not until after a patient endures persistent gastrointestinal symptoms that they will receive a screening that reveals the cancer.

‘Ovarian cancer is often said to be a silent killer because it doesn’t have early symptoms, when in fact it does have symptoms, they’re just very general and could be caused by other things,’ he said.

‘One of the things I tell women is that nobody knows your body as well as you do. If you feel something isn’t right, something’s probably not right.’