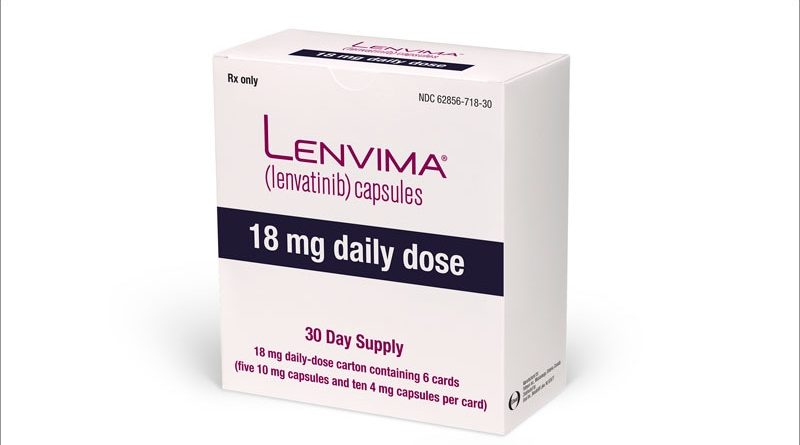 Eisai US has expanded its lenvatinib (Lenvima) dose exchange program to cover all indicated dose reductions for women with endometrial cancer, according to a company spokesperson.

The company will exchange up to 15 days of a patient’s current dosage for a lower dosage once per quarter at no cost.

This is good news for patients, because most of them need a reduction from the starting dose of 20 mg/d due to adverse events. The product labelling recommends stepwise reductions from 20 mg/d to 14 mg, then to 10 mg, and finally to 8 mg, as needed.

But it’s not as simple as taking fewer capsules because lenvatinib comes in dose-specific packaging: boxes of six blister cards with five daily doses on each, covering a total of 30 days.

Eisai first launched its dose exchange program amid lenvatinib’s accelerated approval in September 2019 and full approval in July 2021 for unresectable advanced endometrial carcinoma that is not microsatellite instability-high or mismatch-repair deficient, in combination with pembrolizumab (Keytruda), following progression on prior systemic therapy.

Initially, the exchange program only covered the first reduction from 20 mg to 14 mg, allowing providers to exchange up to fifteen 20 mg doses for the same number of 14 mg doses. The cap was set at 15 doses because for most patients, it becomes clear that they need a dose reduction halfway through their 30-day supply, leaving the remaining 15 doses unused.

Eisai recently told Medscape Medical News that the program will now also cover the 10 mg to 8 mg reduction, with 8 mg being two 4 mg capsules. The reduction from 14 mg to 10 mg doesn’t require a new box because patients can simply take the 10 mg capsule without the 4 mg one.

The move was prompted by a study led by Aviki and presented at the recent meeting of the Society of Gynecologic Oncology.

She told the audience that by not covering the 10 mg to 8 mg reduction in its exchange program, Eisai was costing US patients and payers almost $72 million a year in wasted medication.

However, Aviki told Medscape Medical News that “just prior to entering this meeting to give this talk,” she was approached by Eisai personnel who were aware of her research “and they gave a commitment to completely revamp their dose exchange program so that it will cover all indicated dose reductions.”

When she told the audience about this commitment, the delegates responded with sustained applause and a few cheers.

“You wonder if an [economic] modeling study ever matters and, wow, it sure does,” said moderator Jubilee Brown, MD, a gynecologic oncologist at Atrium Health in Charlotte, North Carolina.

“I was very proactive,” Aviki commented. “They just really needed to be made aware that such a significant and relevant dose reduction needed to be included” in the program.

“Once they were made aware, they very respectfully made the change. I am so grateful they did,” Aviki said in an interview.

Her study arose out of discussions with colleagues about how to start women on lenvatinib given the complexities of the dose-specific packaging. Providers were unsure if they should start women at the recommended dose of 20 mg/d, or rather 18 mg/d so they wouldn’t need a new box of medication to go down to 14 mg, but instead could simply omit one 4 mg capsule.

Pharmacists and oncologists at MSKCC and other institutions, including Aviki, were unaware at the time that Eisai had a dose exchange program that already covered the initial 20 mg to 14 mg reduction, she said.

Duane Dorscheid, the senior director of patient services at Eisai US, leads the team that developed and monitors the dose exchange program. He said expanding it was part of the company’s commitment to continual improvement.

“We are constantly looking at these programs [and] assessing how they work, [looking] for feedback from patients and providers” to ensure “we are helping as many patients as possible,” he said.

The company is now considering an additional request from Aviki to allow for more than 15 doses to be exchanged at a given time.

Most patients won’t need that, but “even if it affects one patient, it’s torture for that patient; it’s money out of pocket, and that’s what we want to prevent,” Aviki said.

“We are certainly looking” into the request, said Dorscheid.

The website for the Lenvima Dose Exchange Program hasn’t been updated yet to include the 10 mg to 8 mg reduction, but Dorscheid said providers can fill out the form on the website or call the number provided to arrange for the exchange.

As for the dose-specific packaging, which is unusual in oncology, he said it’s for patient ease, so there’s no confusion about what dose to take and whether it has already been taken, similar to birth control packaging.

There was no external funding for Aviki’s study, and she reported no financial conflicts of interest.

M. Alexander Otto is a physician assistant with a master’s degree in medical science and a journalism degree from Newhouse. He is an award-winning medical journalist who worked for several major news outlets before joining Medscape and is also an MIT Knight Science Journalism fellow. Email: [email protected]