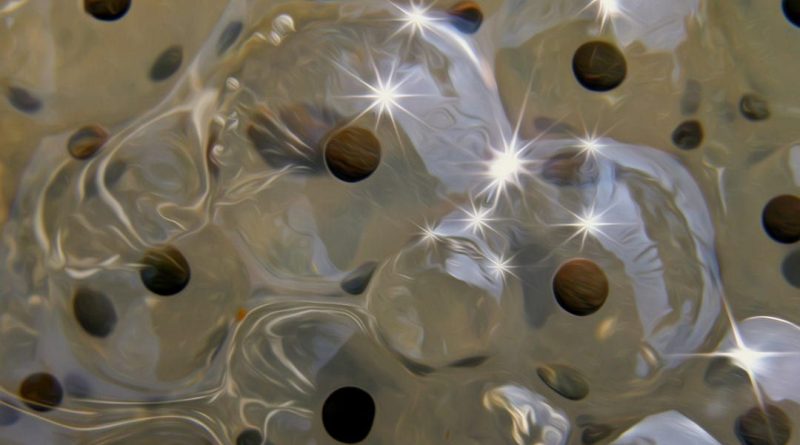 Whether you’re a frog or a human, reproduction is an occasion of cellular celebration. New research finds that in species separated by millions of years of evolution, a fertilized egg gives off a fireworks show of metal atoms.

This microscopic shower of sparks was discovered in human eggs in 2014, leading researchers  to wonder what purpose the sudden release of metals served. Now, the same researchers who discovered the original fertilization fireworks have found that the same thing happens in fertilization in frogs — organisms that are separated from humans by 300 million years of evolution. Both manganese and zinc atoms explode from the eggs’ membranes right after the sperm make contact.

“It’s underscoring that zinc fluctuations are an ancient and conserved part of the regulatory mechanisms controlling development,” said study leader Thomas O’Halloran, a chemist at Northwestern University in Illinois. He and his colleagues are still working out the details, but they believe that the manganese and zinc may both prime the egg for future development and protect it against being fertilized by more than one sperm.

O’Halloran and his team learned in 2014 that when a human egg enters the final stages of development in preparation for fertilization, it starts “bulking up” on zinc, pulling in 50% more of the metal from its surroundings than earlier in its development. They’ve since learned that if an egg fails to incorporate all this zinc, it cannot be fertilized. Exactly what the zinc is doing at this pre-fertilization stage isn’t clear, but the researchers have some early data to hint that the zinc primes other proteins in the egg get the egg ready to become pluripotent — meaning the egg is capable of dividing into every cell type in a new organism’s body.

In this stage, O’Halloran told Live Science, the zinc seems to be playing a communication role, allowing parts of the cell to signal to one another. But at the moment of fertilization, zinc seems to do something else: First, it gathers in tiny compartments called vesicles in the cell membrane, and then it releases in what the researchers call a “zinc spark,” with billions of metal atoms exploding outward at once.

Since finding this zinc spark in human eggs, the researchers have discovered it in monkeys, cows and mice. Turning toward more ancient lineages than mammals, they have now found a similar spark in the African clawed frog (Xenopus laevis). They reported their findings June 21 in the journal Nature Chemistry.

Frog eggs are nice to study, O’Halloran said, as they’re much larger than mammalian eggs. This means they consist of more atoms, which makes it easier to use microscopy to see the metal atoms.

“The frog has been really giving us some special information that we couldn’t get from the other systems,” O’Halloran said.

One surprise was that when a frog egg is fertilized, it doesn’t just release zinc; it also releases manganese. O’Halloran and his team aren’t sure whether this manganese release is specific to frogs or if it might happen in mammals as well. Their threshold for detecting the metal in mammalian egg studies wasn’t high enough to tell for sure, given that mammal eggs are so much smaller than amphibian eggs. It might be that the manganese is a particular quirk of amphibian eggs, which are fertilized and develop outside the mother’s body. Or it could be that a manganese spark occurs in humans too and more detailed research is needed to observe it.

Either way, the eruption of manganese and zinc from the egg at fertilization might be a way to prevent what O’Halloran called the “catastrophe of polyspermy.” Polyspermy means the fertilization of an egg by multiple sperm. This leads to the problem of too many genomes and kills the developing zygote.

In the new study, the researchers showed that levels of zinc and manganese prevent sperm from fertilizing an egg, leading them to suspect that the fireworks show is in fact a protective mechanism that may block additional sperm from breaching the egg.

Zinc and manganese are interesting nutrients, O’Halloran said, because the body cannot synthesize these metals nor break them down. It has to get them from the diet, store just the right amount and excrete any extra that it’s not using.

“They’re more complex nutrients than most any vitamin or protein or fat,” he said.

—11 surprising facts about the reproductive system

—The 7 biggest mysteries of the human body

—Trying to conceive: 12 tips for men

Zinc is found throughout the body and was once thought to simply help enzymes in cells complete chemical reactions. More recently, O’Halloran said, it’s become clear that zinc is sometimes used as a cellular messenger. Manganese, on the other hand, hasn’t yet been shown to have much of a messenger role, but research is limited, O’Halloran said.

The main thrust of the research is simply unraveling the complex ways in which egg cells function. After all, O’Halloran said, these cells start to develop when the female is still a fetus, and have to remain in a state of stasis for years before suddenly developing very rapidly in preparation for fertilization. Ultimately, the role of zinc and other metals in this process could point to questions for fertility researchers, such as whether a lack of zinc ever plays a role in infertility.

“I think it points to the fact that you have to have a really complex array of elements available for cells during reproduction,” O’Halloran said.

Stephanie Pappas is a contributing writer for Live Science covering topics from geoscience to archaeology to the human brain and behavior. A freelancer based in Denver, Colorado, she also regularly contributes to Scientific American and The Monitor, the monthly magazine of the American Psychological Association. Stephanie received a bachelor’s degree in psychology from the University of South Carolina and a graduate certificate in science communication from the University of California, Santa Cruz.