Home » Health News » How can I get over my needle phobia? 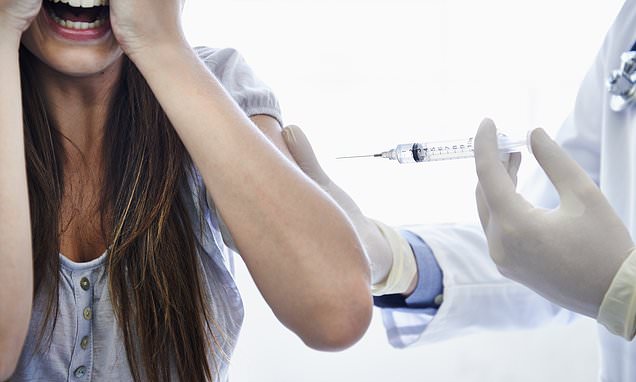 How can I get over my needle phobia? BECKY MCCALL is so scared of jabs they make her faint – and that’s surprisingly common

It’s a wonderfully welcome sight: pictures of people having their Covid vaccinations. But I’m afraid I can’t share in the joy.

In fact I can barely look at one without shuddering, as I’m overcome by a mix of panic and nausea. It’s not that I don’t support the vaccine plan – quite the opposite.

As a science writer, I know how safe and effective the jabs are. There’s just one problem: I can’t bear needles.

The last time I was jabbed by one, during a blood test about five years ago, I had to have it lying down and almost fainted.

I know it sounds melodramatic, but I’m far from alone. One in ten of the population suffers needle phobia to some degree.

Mild phobics will flinch or look away at the sight of a needle, and make a huge fuss, but still be able to have a jab. 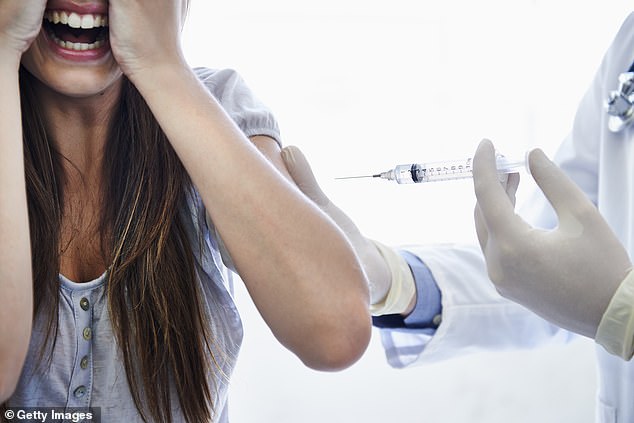 It’s a wonderfully welcome sight: pictures of people having their Covid vaccinations. But I’m afraid I can’t share in the joy, writes BECKY MCCALL

In severe cases, sufferers can be plagued by nightmares and even avoid leaving the house for fear of encountering something needle-like.

Others, like me, suffer a phenomenon called vasovagal syncope, a not-uncommon nervous-system over-reaction to harmless triggers, such as the sight of blood.

The condition is an extreme manifestation of needle-phobia. The stress of having a jab causes a cascade of hormones to be released in the body and a sudden drop in blood pressure.

This can cause nausea and even loss of consciousness, as the change in blood pressure means there is suddenly too little blood reaching the brain.

Social media went into overdrive last month when a nurse in Tennessee fainted while receiving the Covid vaccine on live TV.

And it was shocking to see – I looked away when she had the actual jab, but watched the all too familiar aftermath.

One moment she’s fine, the next she slumps off her chair as worried onlookers rush to help.

There were some wild suggestions that she died as the result of a fatal reaction. In fact, it was vasovagal syncope.

The nurse, Tiffany Dover, later admitted she often faints when having injections. Vasovagal syncope can also be triggered by mild pain – and she said she also faints when she stubs her toe.

I’m not sure when my own phobia began, but the reactions seem to have become more extreme as I’ve got older. It’s linked to the fact that the sight (or even idea) of blood makes me squirm. 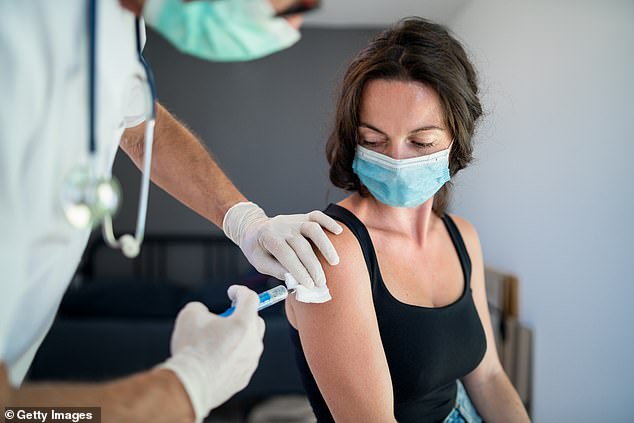 One in ten of the British population suffers needle phobia to some degree. Pictured: Stock image

If one of my children – aged six and ten – bashes a knee, it’s my partner who steps in to put on the plaster. If they’ve got a loose tooth, I just can’t look. It’s too gory.

Needles, by their nature, cause a little bit of bleeding, hence my aversion. I used to suffer terrible nosebleeds as a child which would make me faint. I think this is why blood makes me feel anxious.

The first time I passed out was about 15 years ago, after having a travel vaccine prior to a work trip to Panama. Since then I’ve avoided injections or blood tests unless strictly necessary – and have to have them lying down.

I also spend weeks worrying beforehand, and often cancel and then rebook. It’s all rather over the top, and I don’t want to be like this. I hope, at some point soon, to have the Covid vaccine – although at 49 I’ve got a while to wait.

And I’d like to be able, if not to enjoy the experience, at least not to have to be carried out on a stretcher afterwards.

The NHS-backed approach to overcoming fear of needles, I have discovered, is called applied tension. It’s a technique to raise the blood pressure, and so avoid fainting, which you have to practise three times a day for a week before the injection.

Sitting somewhere comfortable, you clench all the muscles in your arms, upper body and legs and hold the tension for about 15 seconds, or until your face begins to feel warm, then relax for 30 seconds. This is repeated five times.

Another technique is ‘breathing for relaxation’, which the NHS suggests doing in the five days running up to an injection.

Sitting upright, put your hand on your stomach and take long, slow, gentle breaths in through the nose, and out through the mouth. Do this five times, three times a day.

Another tried-and-tested technique is to make what’s known as a ‘fear ladder’. On a blank page, write a list of situations involving the thing you’re scared of, then give each a score out of ten.

A ten out of ten would be a masked nursed lunging at me with a knitting-needle-sized hypodermic.

Phobics are advised to pick the least scary thing on their fear ladder and prepare to face it after five days of doing the tension training and breathing exercises. Once that’s done, either repeat this or move on to a slightly scarier one.

I decided to give it a go by watching a YouTube video of someone having an injection – I’d say a five out of ten on my fear ladder.

After a day of doing my exercises, I log in, search ‘phlebotomy’ (bloodletting) and pick a video. As it starts, I have butterflies in my stomach.

First we see an arm and a nurse explaining the technique – a tourniquet is applied, a syringe prepped, a large needle inserted into a vein and blood drawn.

My nerves seemed to hold steady. Although I felt a little fidgety and uncomfortable, it was fine even as the plunger was pulled back, filling the syringe with blood.

Later I speak to Anxiety UK psychotherapist Michelle Mould, who has treated dozens of needle phobics. Most of these phobias, she says, develop in childhood – kids hate injections because they hurt.

But if a hysterical child is held down or the situation is otherwise mismanaged, such as with a parent becoming visibly upset, it can make things worse.

These experiences can haunt us into adulthood.

And those who don’t like needles, like me, with a phobia, will avoid them more than most. So we never learn not to fear them.

Mould offers sessions of cognitive behavioural therapy, during which the aim is to try to get them to change how they think about injections.

She tells me to focus on the good outcomes (I’ll get vaccinated, so I won’t get Covid), rather than irrational worries (that I’ll bleed to death while writhing in agony).

This rings true to me as, paradoxically, I don’t mind having injections at the dentist. I’ve also had two caesareans, with epidurals, and that didn’t bother me either.

I suppose, in my irrational mind, the benefits of the injections in those cases – not feeling the pain of the dentist’s drill or having a baby – outweigh everything else.

Mould says: ‘We think ourselves into phobias and extreme reactions, so we can think our way out of them.’

And so, when I do get that letter inviting me to go for my Covid jab, I know just what I need to start doing…