When I was young, I didn’t give much thought to my appearance. My mother did. She pulled my long, curly hair into ponytails, pigtails and fishtails. She dressed me in adorable outfits. I wore tights, button downs and seersucker skirts. My patent leather shoes shined. I always looked polished and tidy. 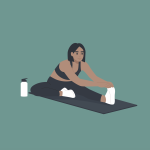 8 Best Stretches for Lower Back Pain

I didn’t give it a second thought, at least not until I entered middle school. That was when bullying began and when outward appearance either made you cool or uncool.

You see, when I was 12, my life changed. My family moved — abruptly — from one state to another. We downsized, tightened our belts and started shopping at Bradlees, Caldor, Kmart and Payless. Name brand duds were off the table, which is hard when you’re in middle school.

In November, my father died. His loss was painful and sudden, and it took a toll on our physical, mental and financial well-being.

And a few months later, I learned I had scoliosis, a medical condition which causes the spine to curve.

Scoliosis is common. According to John Hopkins Medicine, roughly 3 million new cases are diagnosed each year, the majority of which are identified as idiopathic scoliosis — the type of scoliosis that appears in children between 10 to 12 years old — and schools regularly screen for it. Most cases of scoliosis are relatively benign and painless, and many curvatures fix themselves. Fewer than 30 percent require treatment and only 10 percent of scoliosis patients will need surgery.

But I was “special.” I hit the scoliosis lottery, if you will, because not only did my case allude gym teachers and my pediatrician — my curve was found accidentally during an X-ray for an unrelated cardiac condition — I also learned it was a whopping 70-plus degrees. This severe of a curve needed to be treated visibly and aggressively. There were only two options: I would have to wear a back brace 16 hours a day or undergo surgery.

Both options seemed drastic, because they were. The mention of surgery was terrifying … and a back brace? That was disconcerting. However, since the operation was seen as a last resort, my mother and I chose the back brace. With it, doctors hoped they could alter my curve enough to make my life manageable.

I knew it would never be “fixed,” but in order to avoid heart, lung and back problems, correction was key. And yes, in severe cases like mine, these complications can occur. According to the Mayo Clinic, the curvature can cause the rib cage to press against the lungs and heart, making it more difficult to breathe and harder for the heart to pump.

My body was cast, molded and covered with a hard plastic case that ran from my underarms to my breasts, down my chest and over my abdominal cavity. In the brace, my movement was limited. I couldn’t bend over or backward and sitting was a challenge. I was stiff and rigid like a robot, and while I was able to wear the apparatus under my clothes, everyone could see it was there.

My left shoulder was raised by the device. It sat several inches above my right. My torso was tilted. Everything was “off” about 30 degrees. And the fiberglass bulged beneath my shirts.

It was a talking point in the locker room.

I was mocked, taunted, teased and harassed. I was called gimpy, spastic, hunchback and deformed. I was ignored on a regular basis. Glances turned downward and whispers filled the halls, and it was brutal.

I was bullied during my most formative years of my life.

The brace also did me no good. After a year, there was no improvement. I had to undergo lumbar fusion surgery after all.

The good news is that, physically, I have made a full recovery. After an 8-hour operation, one rod, five screws, days of bed rest, weeks of therapy and years of doctor- and self-imposed limitations, I am better than ever before. I am a yogi, runner and occasional boot camp aficionado — all things I do because of, not in spite of, my operation. I run to challenge my body. To prove to myself I can. But the emotional scars, like the 16-inch incision along my rib cage, remain.

I still struggle with not feeling good enough or pretty enough. I walk around every day trying my best to go unnoticed. To blend in. I am incredibly self-conscious. I wear oversized shirts to conceal my torso not because I need to but because, subconsciously, I still feel like I have to. Something is still there: an invisible cast, brace or stigma-inducing device. I rarely do my makeup and hair. I carry purses on my “high” shoulder. I hope the weight of my bag will pull me down and balance me out. I avoid eye contact. Hushed conversations set me on edge. And, physically, I’m still limited.

When I bend, I cannot touch my shins or toes. Most yoga moves are modified to accommodate my inflexibility.

I do not blame my peers for their harsh words — not really. Middle school is a hard time, and teens struggle socially, emotionally and with their identity, both in their friend group and beyond. But I believe we can do better by teaching our own children to be better. By letting them know it’s okay to be different.

So please: Talk to your children about diversity and disabilities. Address the topic as you would any other important conversation, like sex education or bike safety. Explain that people come in all shapes, colors and sizes. Just because someone looks “different” doesn’t mean they are scary or bad. Let your children know it’s okay to ask questions. That is how we all grow and learn. Discourage negativity and make them own up to inappropriate actions. Apologies can be both humbling and powerful. And remind them that while they do not have to love or even like everyone, they can (and should) be accepting. We are all people and should be treated as such.

A version of this story was published October 2019.

Before you go, check out our favorite most affordable mental health apps to try: