Home » Health News » Hypnosis for anxiety? ‘Doable’ if you have an open mind

The office was sparse, a reclining leather chair in one corner and a desk in the other. The paintings on the walls were of waves and beaches, gentle blues, pinks and yellows, offset by a large gold frame.

I didn't know what to expect from a hypnotherapist’s office, but it wasn’t quite this: a cross between officious and therapeutic, with the hypnotherapist wearing a simple blue Oxford shirt and black slacks. The session took an hour, and even now, I’m not quite certain what happened. 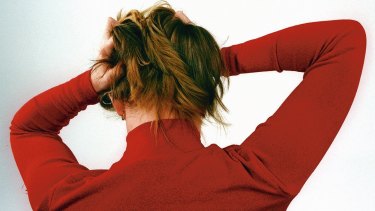 It wasn’t quite what I expected but I think it worked.Credit:Garry Medlicott

I’m pretty sure I wasn’t hypnotised in the way we think hypnosis works: there was no swinging pendulum, strange murmuring or hint of mind control.

But … I think it worked.

What I came in to treat – anxiety – is not as simple as treating a smoking habit, my hypnotherapist said. But it is doable provided you have an imagination and are susceptible to the power of suggestion.

Dr Vince Polito from Macquarie University’s Department of Cognitive Science says that while hypnotherapy isn't for everyone, "research consistently shows that about 15 per cent of the population is highly hypnotisable”.

Many researchers at reputable universities experiment with hypnosis as a treatment for a variety of conditions.

Most research focuses on people who are highly responsive to a set of procedures involving what’s called an "induction" – such as fixating on an object, relaxing or actively imagining something – followed by one or more suggestions, such as, "You will be completely unable to feel your left arm."

This can induce a mental state in which participants are focused on instructions, not distracted by everyday concerns.

“A hypnotic induction is anything that the person being hypnotised accepts and believes in as an induction,” says Irving Kirsch, associate director of placebo studies and lecturer in medicine at Harvard Medical School.

Induction techniques can range from using relaxation instructions and imagery to practising the "active alert induction", which means hypnotising people while they ride a stationary exercise bike.

My hypnotherapist began by asking why I wanted treatment. He says intrinsic motivation (rather than external motivation) is important for success of hypnosis. After years of going psychologists without much success, I was willing to try.

He tested my imagination by asking me to envision my home by asking a series of questions: “You open your front door; is there a hallway or the living room? When you’re in the living room, can you see the kitchen or is separate?” and so on, until I was mentally transported.

“You have a very strong imagination: your eyes go into a different sphere when I ask you to visualise certain images,” the hypnotherapist said. And while I did feel like I was in a different world, I never felt my response was automatic or outside my control.

So, does it actually work? Yes – to an extent. Hypnotherapy is far from a fringe movement: many researchers at reputable universities experiment with hypnosis to treat conditions such as pain and smoking.

A person should not be using hypnosis to treat something unless they are qualified to treat it without hypnosis.

Research suggests it can help people who suffer from irritable bowel syndrome and help ease chronic lower back pain.

University of NSW Associate Professor James McAuley and PhD Candidate Rodrigo Rizzo, authors of a 2018 study on chronic back pain, say hypnosis can “target different areas of the brain and change different aspects of the pain experience”.

“We guide people to have a specific experience, such as trying to reduce their pain by a series of suggestions,” Mr Rizzo says.

He found that “high hypnotic suggestibility is not always necessary to experience successful intervention”.

“In our study, we found that clinical hypnosis can change the way the brain experiences pain. We wanted to find out if non-drug interventions could help lower the incidence of back pain, and found that 69 per cent of the patients who received hypnotherapy as well as education about pain reported a reduction in the worst pain, as compared to those who were only educated about pain (36 per cent),” he said.

In some cases, using a combination of CBT and hypnotherapy to treat depression has been shown to have benefits, but, as Beyond Blue points out, there’s not a great deal of clinical trial evidence examining the effectiveness of hypnotherapy for depression.

As for anxiety, Professor Kirsch says there are studies showing "adding hypnosis to standard cognitive behaviour therapy (CBT) … can improve its effectiveness but they presume that the practitioner has received adequate training in CBT and psychotherapy in general”.

A 2019 meta-analysis of 15 studies incorporating 17 trials of hypnosis for anxiety found that hypnosis was most effective in reducing anxiety when combined with other psychological interventions than when used as a stand-alone treatment.

Another 2017 meta-analysis of 20 studies found that hypnosis had a significant immediate effect on anxiety in cancer patients, especially in pediatric cancer patients who experience procedure-related stress.

That said, there is still much we don’t know about hypnosis.

Professor Kirsch stresses that “hypnotherapy is not a form of therapy – it is an adjunct to therapy”.

“That is, it is something that can be added to a treatment and that can often make it more effective. For that reason, virtually all reputable hypnosis societies will not train people in the use of hypnosis unless they have professional clinical credentials such as being a clinical psychologist, [medical doctor], dentist, etc,” he says.

“A person should not be using hypnosis to treat something unless they are qualified to treat it without hypnosis”.

Hypnotherapy is also a self-regulated industry in Australia, guided by a number of various state and national boards and associations such as the peak body, the Hypnotherapy Council of Australia, and the Australian Hypnotherapists Association.

As for me, I’m going to go back to my hypnotherapist.  His advice and the homework he gave me (to write out a series of sentences about what drives my anxiety repetitively) are sound.

Maybe it’s starting to work for me because it is a placebo, maybe it’s because I like his style – or maybe I’m just susceptible to hypnosis. Either way, I felt calmer after my session and I’d like to experience that again.