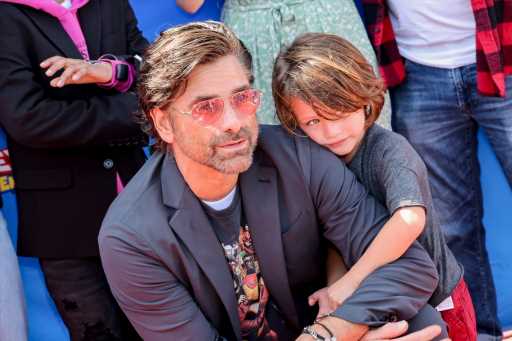 When it comes to sports, John Stamos is somewhat clueless. Acting? Yes. Music? Definitely! But playing tee-ball — that’s a whole new world for the TV Land Timeless Icon Award winner. Despite coaching a girls’ basketball team on his Disney+ series, Big Shot, in real life, the actor hopes his 4-1/2-year-old son Billy will stick to something less dangerous.

In an appearance on The View yesterday, host Sunny Hostin asked Stamos if Billy, who he shares with wife Caitlin McHugh, was into sports yet. She added, “Are you going to start with Little League, maybe?”

He had a refreshingly honest response. “I hope not. I hope not. I know nothing about sports,” Stamos said. “This is the hardest job. It was easier to play a doctor on ER than it was to learn the sports. I’m terrible at it.”

Stamos also shared that his son recently broke his wrist. “He was playing a little tee-ball and I was nervous because I was like, ‘Oh, I have to sit through that?’ But he broke his wrist on the monkey bars the other day and I said, ‘See, that’s sports. That’s what sports does,’” the Grandfathered star said.

Poor Billy! As someone who was recently called to my son’s kindergarten for a playground injury, I know how scary it is to see your kid get hurt. Thankfully, assuming from the fact that Stamos is now joking about it, Billy is likely fine.

But we can talk about his hilarious take on sports? I actually completely agree. Having to sit through hours of little kid sports in the heat sounds less-than-ideal, so its hilarious that Stamos is dreading it too! He was probably hoping for a kid interested in learning guitar, but instead he got an athletic kid, and it’s a little intimidating.

One thing Billy did get from his dad? His flirty personality.

“We were at Disney World a couple of years ago,” Stamos said on The View. “And he’s in the stroller, and I’m talking to my wife, and I look at Billy — and he’s a big flirt, I don’t know where he gets it — but he’s going like this,” he says while waving. “And making eyes at somebody, and I’m looking at him, and I look over, and it was Whoopi!”

Whoopi Goldberg laughs and says, “Little kids like me.”

In the interview, Stamos revealed that he is “a lot more emotional” as a father, adding, “I had a beautiful speech David Kelley wrote last season at the end, and I said, ‘I’m getting what it means to be a parent.’

“It’s not just about spending time or discipline or love — but it’s about sacrifice,” he continued. “And at the end of the day, you don’t get a ring or a trophy. But what you do get is a smarter, more kind, more loving version of yourself out there in the world. So, I try to bring that home.”

Parenthood is also full of laughs, especially of the potty humor variety. Stamos shared a “beautiful moment” that happened with his son the night before that ended with poop.

Ah, the joy of little boys!

Celebrities — they’re just like us! Especially when it comes toembarrassing their kids.

Ah, the joy of little boys!