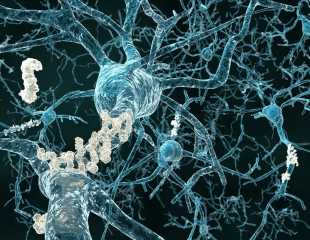 In lab tests, Imperial researchers have created a metal-based molecule that inhibits the build-up of a peptide associated with Alzheimer's disease.

A peptide is a fragment of a protein, and one of the key hallmarks of Alzheimer's disease is the build-up of a specific peptide known as amyloid-β. The team demonstrated that with the aid of ultrasound, their molecule can cross the blood-brain barrier in mice, targeting the part of the brain where the damaging peptide most often accumulates.

Alzheimer's disease is the most common form of dementia, affecting approximately 50 million people worldwide. There is a pressing need to develop drugs that can prevent or reverse the effects of this devastating disease.

Some metal-based molecules have been previously designed to prevent amyloid-β from building up. However, these are often toxic to cells, or are unable to cross the blood-brain barrier (BBB) – a semi-permeable protective barrier that carefully regulates the passage of substances that enter and exit the brain.

Now, a team from the Departments of Chemistry and Bioengineering at Imperial College London have designed a metal-based molecule that is highly effective at preventing the build-up of amyloid-β in lab-based studies.

They also showed that the molecule is non-toxic to human brain-like cells, and that it can cross the blood-brain barrier in mice with the help of a technique using microbubbles and focused ultrasound. The results are reported in the journal Chemical Science.

Very few metal-based molecules have been investigated as potential inhibitors of amyloid-β build-up because of toxicity issues and difficulty crossing the blood brain barrier. The molecule we have designed is able to interfere with amyloid-β and seems non-toxic, and it can be delivered across the blood brain barrier using ultrasound, which means you don't need an invasive procedure."

The molecule is centred around the metal cobalt, surrounded by organic molecules that form a complex, which binds to amyloid-β peptides, preventing them from binding to each other and building up. The molecule also incorporates chemical groups that prevent it from being taken up into human nerve cells, reducing its toxicity.

The team were able to focus the ultrasound on the hippocampal region of the brain, which is often strongly impacted by the build-up of amyloid-β in the early stages of Alzheimer's disease. They were also able to show how specific the ultrasound targeting can be by delivering the molecule only to the left hippocampus.

The molecule was shown to be well tolerated by the mice, who showed no ill effects after several weeks.

Co-author Professor Ramon Vilar, from the Department of Chemistry at Imperial, said: "This study shows the potential that metal-based molecules have in preventing amyloid-β aggregation. The new compound will be studied in more depth to establish whether it can also prevent amyloid-β build-up in mice without having unwanted toxic side effects."