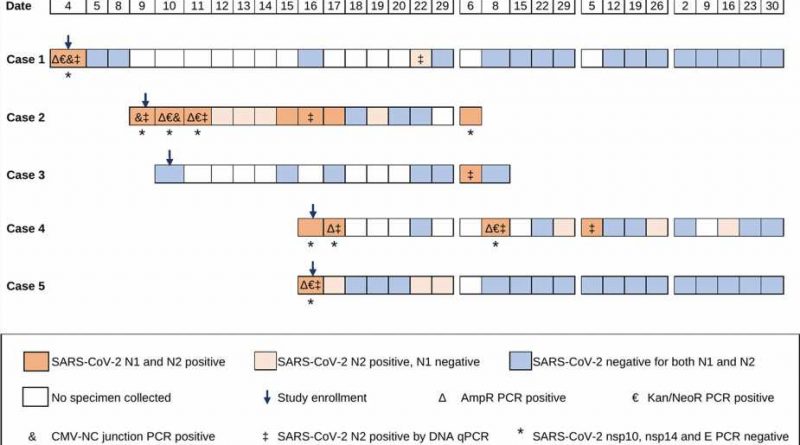 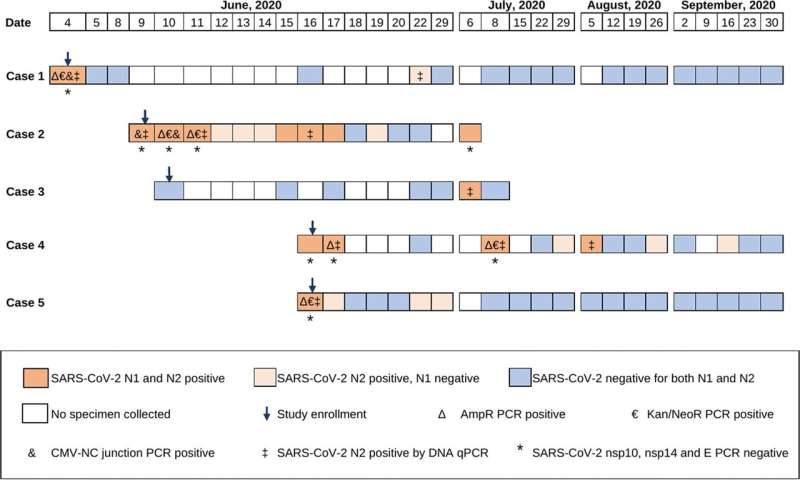 For some laboratory workers a positive test for SARS-CoV-2 may more accurately indicate an occupational exposure rather than a viral infection. This week in Microbiology Spectrum, researchers in Seattle report on a small group of laboratory workers whose false positive tests for the virus came not through viral RNA, but instead from a usually harmless bit of DNA, called a plasmid, that’s commonly used to study the virus.

“Plasmids are small DNA structures commonly found in bacteria, and we use them all the time in the lab to make proteins,” said virologist and study leader Lisa Frenkel, M.D., at the University of Washington, who co-directs the Center for Global Infectious Disease Research at Seattle Children’s Research Institute. “And here, the plasmid seemed to take hold in the noses of people who worked with it.” The study also showed that plasmids can spread to other members of a person’s household.

The number of asymptomatic people who test positive and work with SARS-CoV-2 plasmids in labs, is unknown, since most are unlikely to be tested when asymptomatic, Frenkel said.

More importantly, she noted, the new study revealed that plasmids can linger in the nose, probably within bacteria, for weeks. They can interfere with clinical diagnostic tests. When physicians interpret diagnostic results, she said, they should consider a patient’s occupational exposure as well as their medical history.

Frenkel, whose work usually focuses on HIV, did not originally set out to study lab workers or plasmids. But in late March 2020, as COVID-19 case counts grew worldwide, her lab (and those of many colleagues at Seattle Children’s) pivoted to work on SARS-CoV-2. They began looking for biomarkers that could predict how a person would respond to infection. They launched a prospective observational trial that monitored, on a weekly basis, a group of people who had tested positive for SARS-CoV-2 by polymerase chain reaction (PCR) test but didn’t show symptoms.

As they analyzed the data, the researchers realized that 4 of the asymptomatic subjects in their study who tested positive for SARS-CoV-2 by PCR all worked together in the same lab.

“We knew the principal investigator of that lab, and we knew what they were working on,” Frenkel said. Researchers in that lab had been working with a plasmid that encoded a SARS-CoV-2 protein.

That connection raised a question: Could the diagnostic tests be picking up DNA in the plasmid, rather than the virus? After all, PCR tests detect genetic material from the virus. To find out, the researchers analyzed nucleic acids taken from the nasal swabs of the 4 co-workers and one additional participant, a partner of one of the lab workers who was also asymptomatic and testing positive.

Senior scientist Ingrid Beck, M.S., proved that in all cases tested, the detected material came from the plasmid, not the virus. Multiple PCR assays conducted on the specimens amplified DNA sequences unique to the plasmid used in the lab, but not regions of the SARS-CoV-2 RNA. “They had it in their noses for long periods of time, either in nasal tissues or in bacteria,” Frenkel said. The researchers were most likely exposed to the plasmid through their lab work.

The findings raise other questions that remain unanswered. “Now we’re curious, did [the plasmid] vaccinate those people?” Frenkel asked. “We don’t know if they got mucosal immunity to that part of the virus. Could it protect them?”