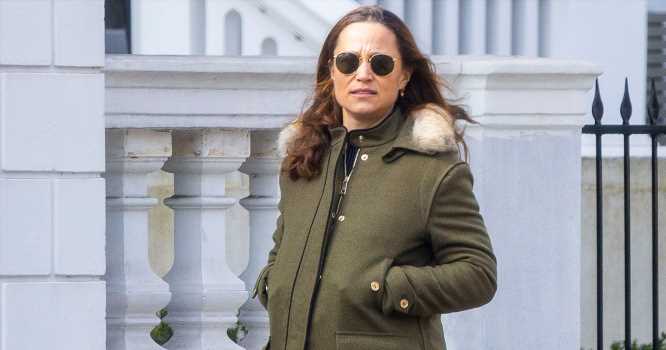 Bumping around! Pregnant Pippa Middleton stepped out with her baby bump on display a week after her mom, Carole Middleton, confirmed her daughter’s expecting baby No. 2.

Pippa, 37, was photographed walking around London in a green jacket, dark jeans and white sneakers. Her hands were in her pockets for part of her stroll, as she rested them on top of her growing belly.

“I hope to see more of my family than I could last year, including, of course, my new grandchild,” she said, referencing the stay-at-home orders put in place across the United Kingdom as a result of the coronavirus pandemic.

Rumors began swirling in December 2020 that the socialite was expecting her second child with husband James Matthews. The couple also share son Arthur, 2.

The Party Pieces creator often speaks about her grandchildren and told the magazine she considers herself a “hands-on” grandma with both Pippa and her other daughter Duchess Kate‘s little ones, Prince George, 7, Princess Charlotte, 5, and Prince Louis, 2.

“I want to run down the hills, climb the trees and go through the tunnel at the playground,” she shared. “As long as I am able to, that’s what I’ll be doing. I cook with them, I muck around dancing, we go on bike rides.”

Neither Pippa nor Carole has spoken out about claims made about Kate during Meghan, 39, and Harry’s sit-down on Sunday, March 7. During the interview, the Suits alum addressed reports that there was a rift between her and Kate. She spoke specifically about a report that she made her sister-in-law cry ahead of her May 2018 wedding, revealing that it was actually the other way around.

Meghan maintained that she and Kate made up after she apologized. While Kate has been quiet about the drama, Prince William told the press on Thursday, March 11, that he plans to reach out to his brother.

“I haven’t spoken to [Harry] yet, but I will,” he told a Sky News reporter during a visit to a school in London.

Asked about allegations of racism within the royal family, the duke assured the British media, “We’re very much not a racist family.”

In order to view the gallery, please allow Manage Cookies