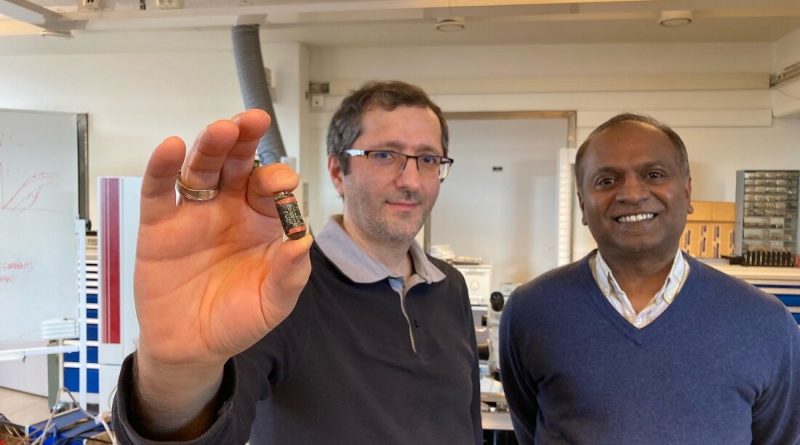 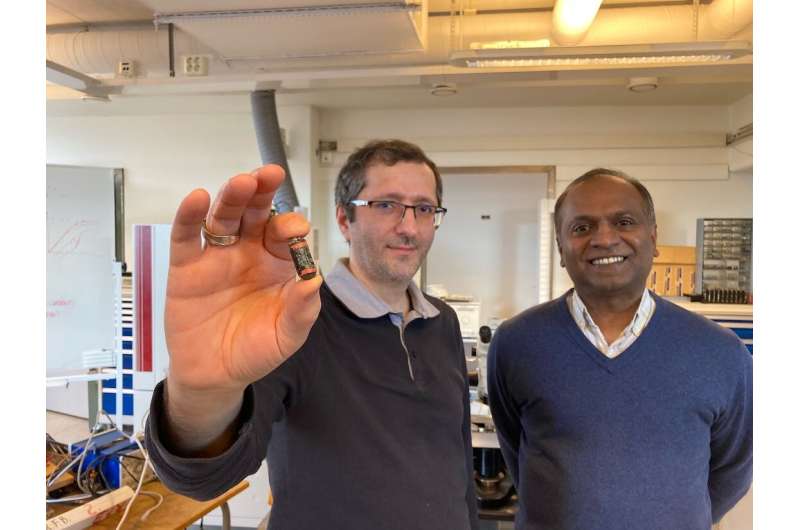 We are up on the third floor of the electrical building at NTNU, not a place you usually associate with cancer research and medical equipment. But the little green pill that researcher Ali Khalegi is holding between his thumb and forefinger could well become an important tool for detecting and preventing cancer within the next few years.

“Colorectal cancer is the second most common form of cancer in the world, both for women and men. Detecting polyps in the intestine early is crucial,” says Ilangko Balasingham, a professor at NTNU’s Department of Electronic Systems.

The little green pill that the NTNU researcher is holding is part of the 5G-HEART 5G-Health research program. The program uses 5G network technology in everything from medical equipment to monitoring farmed fish. And if things go the way the researchers in Trondheim hope, anyone and everyone over the age of 55 will soon have the opportunity to become acquainted with the pill.

“Usually, an examination of the gastrointestinal tract requires going to the hospital to have a colonoscopy. Many people are reluctant to have this procedure, and if they don’t have any symptoms, they’re happy to opt out of it,” says Balasingham.

The current expansion of the 5G network and newly developed signal technology now open up the possibility of doing this exam from home yourself. The NTNU researchers have developed a method for transmitting data signals from the capsule while it is inside the body, without straining the capsule’s battery.

“PillCams already exist, but they’ve had some weaknesses and aren’t used very actively in Norway. One problem is that they’ve had to use battery capacity to transfer the video images to an external device. Our capsule doesn’t need to use the battery for that. Instead, the energy is used to increase the frame rate and lighting conditions, providing better resolution and detail in the video that the pill delivers. The important thing as the capsule moves through the intestine is to make sure it doesn’t miss anything from taking too few pictures along the way,” says Balasingham.

The powerless signal transmission is based on radio waves sent to the capsule.

“We transmit radio waves and get responses from the pill in the form of a reflection. You can compare it to listening to an echo,” Balasingham explains.

The actual use of the pill is controlled by an app on a mobile phone. A real-time AI (artificial intelligence) system analyses the video images along the way and provides feedback to the capsule inside the body.

“You use the app to register information about you as a user and link this to the pill. Then a light signal from the phone is used to activate the pill before you swallow it and the filming starts. The video itself is transferred to the cloud where computers analyze the video for polyps. So the whole procedure is automatic, without people needing to be involved in the loop. In the past, this has taken place by the doctor sitting in his office and analyzing an eight- to ten-hour long video,” Balasingham says.

One advantage of using this kind of capsule is that we’re also able to examine the small intestine, which we otherwise wouldn’t see with a normal colonoscopy exam.

Offering to everyone over 55

This year, the Norwegian Directorate of Health is starting a screening program in which everyone turning 55 will receive an offer to participate.

For the time being, the participants will be sent test equipment to take stool samples, which could detect blood in the stool. The plan is to switch to colonoscopy as a method in the long run. Balasingham is confident that the pillcam from NTNU can be included in this screening program.

“Colonoscopy is the gold standard for finding polyps that might develop into cancer. But we don’t have enough doctors in Norway for everyone to access this hospital exam, and it’s getting too expensive. People can swallow this pill at home. It starts filming from the moment you swallow it until it comes out again. It’s a much cheaper solution,” says Balasingham.

Therese Talmo-Rønn is a communications consultant for the Intestinal Screening Program at the Norwegian Cancer Registry. She’s excited to hear about NTNU’s technology development at NTNU.

“Stool samples are a well-proven and effective screening method for bowel cancer, but the research being done on new options is a positive development,” says Talmo-Rønn.

For the time being, the participants in the screening program will be offered to take stool samples every two years. If blood is detected in a person’s stool, they will be called in for a traditional hospital colonoscopy, where any polyps can be removed surgically.

“We expect that out of 1000 participants, around 65 will be offered a colonoscopy. Two of these could be diagnosed with bowel cancer and more than half may have polyps detected. Polyps aren’t cancer, but some of them can turn into it, so any polyps are removed during the exam,” says Talmo-Rønn.

Once we introduce colonoscopy as the primary exam, being examined once will be sufficient.

The earlier the better

When it’s detected early, bowel cancer is easier to treat and often needs less extensive treatment. This results in fewer late onset injuries and a better quality of life. Most countries in Europe have introduced or plan to introduce bowel screening in line with EU recommendations.

Norway is one of the countries in the world with the highest incidence of bowel cancer. On average, ten Norwegians are diagnosed with this cancer every day, which often does not cause symptoms until late in the course of the disease. According to Balasingham, between 12 and 15 percent of all people over the age of 55 are predisposed to this cancer.

“Early detection means a lot. At best, patients can recover completely. But that requires being able to remove any polyps before they develop into cancer,” says Balasingham.

The opposite way in

The research group at NTNU has also developed a variant of the pillcam that is not swallowed, but is introduced into the body “from the bottom up.” The researchers have already started working with a German industrial partner to start producing the prototype.