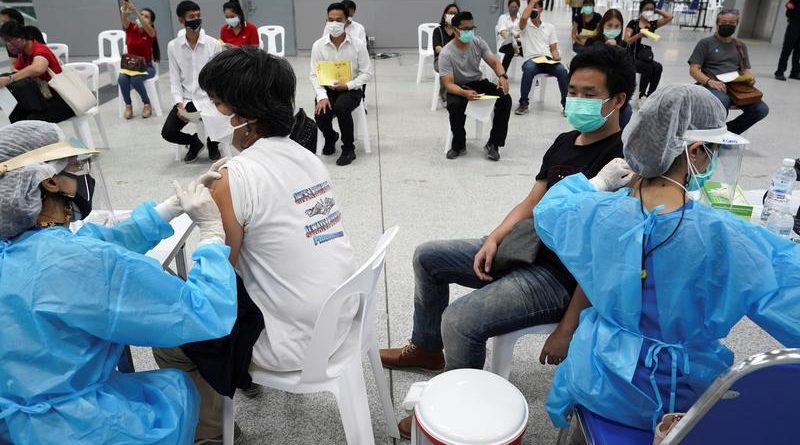 BANGKOK (Reuters) – Thailand will speed up inoculations of elderly and medically vulnerable people to reduce the number of coronavirus patients in critical condition, officials said on Friday, as the country reported a third successive day of record deaths.

Health authorities had initially aimed to vaccinate those groups first, but supplies were diverted to factory workers, communities with big outbreaks, and the population of the island of Phuket ahead of this week’s reopening to foreign tourists.

“We have to vaccinate at least 50% of the two groups by the end of July,” senior health official Sopon Mekton told a briefing, referring to the elderly and those with underlying conditions.

“The situation will worsen because the Delta variant is taking over,” said Kumnuan Ungchusak, a health ministry adviser.

Deaths could reach 2,800 a month in September, up from about 900 last month, Kamnuan said. There were 61 deaths reported on Friday.

So far, 2.8 million of Thailand’s more than 66 million people are fully vaccinated.

Thailand was expecting 10 million doses of the AstraZeneca vaccine to be delivered this month, but the head of its vaccine institute, Nakorn Premsri, said he was notified about half of that would be delivered monthly until September.

AstraZeneca’s Thai partner, royal-owned Siam Bioscience, can produce about 15 million doses monthly, but part of that is committed to other countries, Nakorn said.

Siam Bioscience and AstraZeneca have repeatedly declined to discuss reports of production shortfalls.

Thailand has been rushing to secure supplies from other sources, including mRNA vaccines of Moderna and Pfizer and BioNTech.