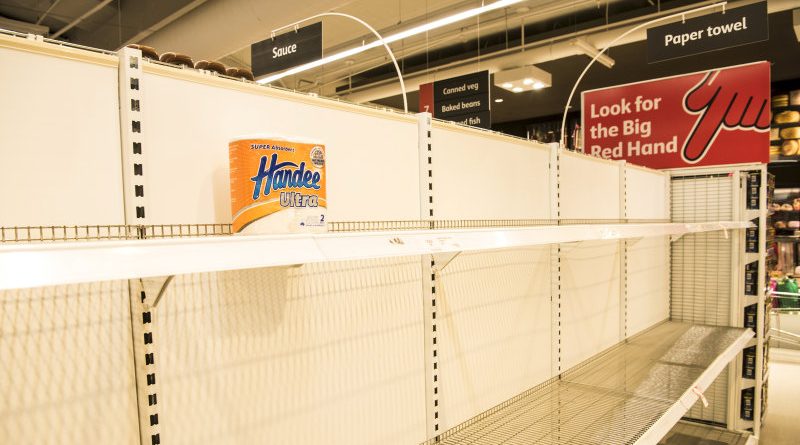 I’ve never really thought about the apocalypse. Too end-of-the-world for my liking. But I have now. Every day, it rolls on. Or rather, it doesn’t roll on. 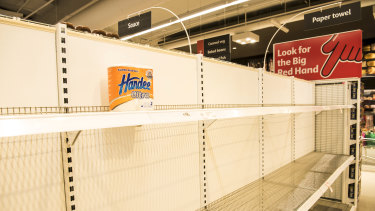 An empty toilet paper aisle at a Coles branch.Credit:Steven Siewert

In a strange, and rather disconcerting, way the thought struck me as I was looking at the empty shelves in my supermarket. I must say it’s not often you look at an empty shelf in a supermarket and believe you’re looking into the vortex of non-existence. But in my defence it wasn’t just one supermarket; it was in each of the three in my wee village outside Melbourne.

All I wanted was a couple of rolls of toilet paper. Just the usual shop. There weren’t any anywhere. As I left empty handed, I half expected tumbleweeds, and bug-eyed giant rabbits, to greet me in the street.

So, this is what it’s like I mused. The apocalypse has begun. The first stirrings of impending doom have arisen not in the trenches, nor in high-tech war-rooms. It has started in aisle 8 at the supermarket. I made a mental note of the time: It was 11.30am, a Sunday in March, 2020.

Future historians, if there are any, will chortle at the absurdity of the beginning of the end. They may remark, these people couldn’t tell their arse from their elbow, metaphorically speaking. When the existential threat of a warming planet was upon them, the uprising of everyone for themselves began in aisle 8.

A new strain of virus has reduced people to insane thinking. This isn’t to diminish the seriousness of the spread of the virus (which the World Health Organisation this week labelled a pandemic). After all, Italy has closed up shop, literally, Donald Trump has closed borders to Europe, large gatherings, such as concerts, are being cancelled worldwide, why even Disneyland is shut. In Victoria sense has prevailed and the grand prix has been cancelled, despite it taking until the 11th hour to go from a massive Petri dish of market force-led health experiment to just plain commonsense. There's a world of difference between sensible public safety concerns and actions and driving, and running, off the edge of a cliff. But something else is happening, and many don't know what it is. Witness on the streets, in the shops, there seems to be an extrapolation and amplification of fear.

It’s easy to laugh, but it’s also easy to see how this can snowball. A woman coughs on a tram, for instance, and a man yells at her to get off the tram NOW! Or mini-vans are seen scouring the countryside making lightning raids on unsuspecting small-town supermarkets, sweeping through the toilet-roll aisles and departing for the next target.

Maybe that’s the thing with apocalypses, you never see them coming. And this one has begun innocuously enough, sort of a cat video gone viral; no stock, and fear and terror take over: people start fighting over the last roll, a man is tasered. Pathetic, ignorant people, rational people tut-tut. But then the rational people find themselves having to act irrationally. It’s all hell in a handbasket.

Calls for calm are not heeded. The country’s chief medical officer, Brendan Murphy, has pleaded: ‘‘There is no reason to denude the shelves of lavatory paper in the supermarkets.’’ A police officer has observed, ‘‘This is not Thunderdome. This is not Mad Max.’’

But who wants to remain calm, sit back and let everyone else have the pleasure of wiping their backsides with the proper implement, when you cannot because of your sane reasoning? What if there is none left, EVER? Do not panic? Bull crap.

So if a nation divides into the haves and have-nots of toilet paper, will anarchy be unleashed. Call in the army? But the army needs to wipe its backsides, too.

UPDATE: Thursday, 12.30. I am finishing this from an undisclosed location. I have found my supply. It only took the mugging of an elderly gent, two families, and a young couple in a supermarket carpark. My conscience is clean and so will remain my …

Warwick McFadyen is a desk editor at The Age.