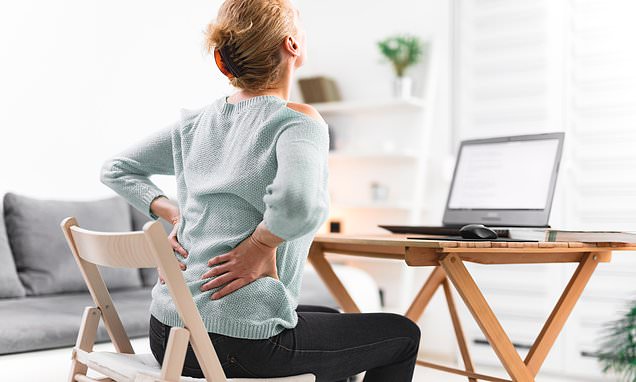 The tiny implant that can zap away back pain: Tailor-made device could provide relief from agony in just minutes, experts say

A new tailor-made implant could provide relief from back pain in just minutes, reports the journal Expert Review of Medical Devices.

The fast-acting, painless treatment blocks pain signals from reaching the brain by stimulating the spinal cord with mild electrical currents.

It can treat up to 32 areas of the back at the same time and takes, on average, just over 11 minutes to reduce pain levels by more than fivefold, research suggests.

Some patients experienced benefits in as little as nine minutes after starting the treatment, which is called fast-acting sub-perception therapy (FAST).

And now doctors at Barts Health NHS Trust in London, along with other hospitals around the country, are trialling the device on more patients. 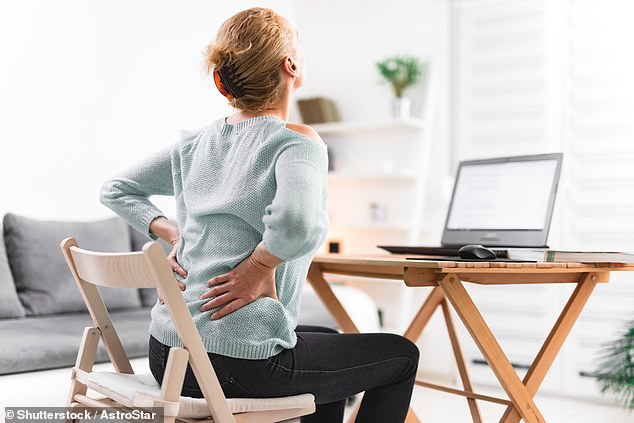 The fast-acting, painless treatment blocks pain signals from reaching the brain by stimulating the spinal cord with mild electrical currents

Chronic back pain is defined as continuous pain that lasts for more than 12 weeks, and affects one in six adults, according to the charity Versus Arthritis.

Treatments range from gentle exercise, painkillers and physiotherapy, to steroid injections and surgery.

The FAST approach involves implanting a tiny generator, about the size of a small pocket watch, under the skin of the lower back.

Wires and electrodes are tunnelled to the sites of pain at various points of the spinal column. Pulses of electricity are transmitted through them to the painful areas via a hand-held controller.

Up to 32 electrodes, each around 1mm in diameter, can be connected to the generator, allowing doctors to tailor the treatment to the needs of the patient.

The electrical pulses interfere with pain signals travelling along nerves to the brain, blocking them or reducing their intensity.

The new research — conducted in the U.S., UK and Spain — shows that the FAST approach not only reduces pain at the targeted point, but in the immediate surrounding area, too.

And unlike other stimulators, the treatment is very fast-acting and sensation-free.

There is none of the tingling feeling associated with other forms of electrical stimulation, such as transcutaneous electrical nerve stimulation (TENS), often used for mild to moderate pain and during childbirth.

The research, involving 41 patients with chronic back pain, shows that the device has almost immediate effects.

Before the device was implanted the average pain level score, based on a medical scoring test, was 8.4, but it dropped to 1.3 within an average of 11.2 minutes of using the device. These lower pain levels persisted for months, according to the report.

And even a year after the device was implanted, the average pain score was only 1.6.

‘This multi-centre study provides the first report of novel FAST seen to induce rapid and sustained analgesia [relief from pain] in patients treated for chronic pain,’ said the researchers.

Commenting on the study, Ian Harding, an orthopaedic consultant at North Bristol NHS Trust, said: ‘The causes of back pain are numerous and treatment should be targeted to the cause if possible.

‘This is an interesting concept that may help some patients with back pain, but we need bigger studies and more research to define its role further.’

Could a chemical found in the liver tackle obesity?

A chemical used by the liver to break down food also plays a role in curbing appetite, according to research in the journal Nature Metabolism.

Using animal studies, scientists from Ecole Polytechnique Federale de Lausanne, Switzerland, discovered that bile acids move from the digestive tract to the brain via the bloodstream, ending up in the hypothalamus, which helps control appetite.

Bile acids blocked the release of proteins that stimulate appetite and feelings of hunger.

Researchers hope that this information could be used to develop treatments for obesity.

A nasal spray derived from colostrum from cows is being tested as a preventative treatment for Covid. The colostrum (a fluid produced after giving birth) is from cows previously immunised against Covid, and therefore contains antibodies. Researchers from Tartu University Hospital in Estonia hope it will act as an effective barrier against the virus.

How exercise boosts a brain-saving hormone

Could a hormone generated by exercise help explain why regular activity is good for brain health?

Researchers from the Massachusetts General Hospital in the U.S. found that brain function was reduced in mice that had been bred so they couldn’t produce the hormone irisin, which is normally secreted from the muscles during exercise. When the animals were given chemicals to raise their irisin levels, their brain function improved significantly.

The findings, which were published in the journal Nature Metabolism, suggest that the hormone helps improve brain health and it could be a potential treatment for diseases such as Alzheimer’s.

Injections of a patient’s own blood can improve symptoms of chronic long-term back pain. Around seven out of ten patients saw improvements after infusions of platelet-rich plasma (PRP), according to research in the journal Pain Physician.

The trial at the Barcelona Institute of Traumatology in Spain included 65 patients who had experienced back pain for around ten years. PRP is made by spinning blood to produce greater concentrations of platelets, which contain proteins called growth factors that help heal injuries and have anti-inflammatory effects.

This week: Reduces the work blues

Listening to a 30-minute playlist of your favourite music can ease work-related stress. That was the finding from a study published in the Journal of Public Health by researchers from the University of Pavia, Italy, and other institutions.

The 45 participants were divided into three groups — one listened to music of their own choice, the second listened to a playlist which was chosen by artificial intelligence, and the third group listened to no music.

The two groups who listened to songs (30 minutes of music daily for a period of three weeks) reported lower stress levels than those in the non-music group. It was based on a questionnaire, the Maugeri Stress Index, that assesses the impact of work on mental health. Studies show that music helps reduce levels of the stress hormone cortisol.

Talking therapy can help reduce pain during sex, report Canadian researchers. They asked 108 couples who were affected by this to attend either cognitive behavioural therapy (CBT, a talking therapy) for three months or use lidocaine (a numbing cream). CBT eased pain more, as it’s thought that it reduces the association between pain and sex.

The health benefits in your larder. This week: Mushrooms help prevent osteoporosis

They are one of the few plant sources of vitamin D, which enhances absorption of bone-strengthening calcium to prevent osteoporosis, where the bones become crumbly.

Exposing mushrooms to UV light greatly increases their vitamin D content, in a similar way our skin produces the nutrient when exposed to the sun. In 100g of Portobello mushrooms, the vitamin goes from 0.3 micrograms to more than 11 micrograms in just a few hours, according to the U.S. Department of Agriculture.

A review from the journal Nutrients in 2018 by Curtin University, Australia, found putting the mushrooms gill-side up in the sun maximises their vitamin content.

The NHS tells us to have 10 micrograms of vitamin D every day. You can get this from two Portobello mushrooms that have been exposed to the sun.

Doctors have developed a new blood test to spot cancer — and it could even be used to screen unborn babies for genetic disorders.

The GETmap test is based on the principle that when any cell dies (including from a developing foetus), some of its DNA ends up in the bloodstream.

This ‘circulating’ DNA can be used to help identify cancer before it would show up in standard screening.

Unlike previous methods for testing circulating DNA, this new approach measures epigenetic changes, where certain genes are turned on and off. It can also reveal the original tissue where the DNA came from, according to a study from the Chinese University of Hong Kong, published in the journal eLife.

Live parasites are being used in a vaccine against malaria.

The disease is caused when mosquitoes transmit Plasmodium parasites (which are in their early phase of development) into their victim.

They move from the bloodstream into the liver, where they develop and multiply, before returning to the bloodstream, infecting red blood cells and causing symptoms.

In a clinical trial, vaccines containing the Plasmodium parasites were given to participants as well as antimalarial drugs that kill them before they can develop further.

The volunteers in the study were then infected with malaria three months later. The researchers found that the vaccine leads to high levels of protection, reports the journal Nature. There are 229 million worldwide cases of malaria each year.