Home » Health News » U.S. Has Most Coronavirus Cases Worldwide with Over 93,000: Here's an Updated Map of the Spread 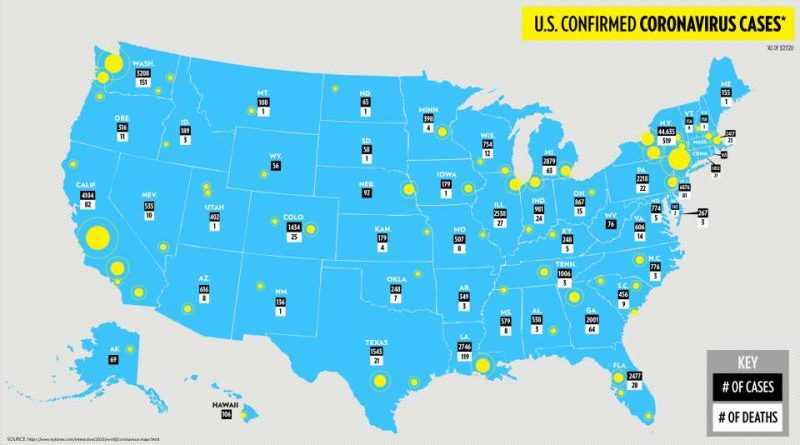 The first cases of a mysterious respiratory illness — what is now known as COVID-2019, a form of coronavirus — began in Wuhan, China in late December. Since then, the virus has spread worldwide, leading the World Health Organization to declare a public health emergency, the first since the zika epidemic in 2016.

At first, this coronavirus was contained to China, but Wuhan is a major transportation hub with hundreds of flights leaving and landing from the city of 11 million each day. Soon, as people flew from the area to different countries, the coronavirus reached more countries, including the United States.

The first case was found in Everett, Washington, just outside of Seattle, in a man who had recently returned from Wuhan. The number of cases grew slowly from there, with a total of just 14 over the course of about a month, but as February came to an end, the virus began to spread more rapidly in communities across the U.S.

On Feb. 26, California health officials announced the first case of community spread — meaning someone had contracted coronavirus despite no recent travel, and had likely unknowingly come in contact with someone with the disease. From there, the number of U.S. cases jumped up, particularly in New York, where health officials are conducting extensive testing.

The State Department chartered three flights to bring Americans who had been living in Hubei province, where Wuhan is located, back to the U.S., and three of the passengers were quarantined to recover from COVID-19, according to the CDC. And in mid-February, the State Department decided to fly back Americans who had been on the Diamond Princess cruise ship, which had been quarantined in Japan after an outbreak of coronavirus among the passengers. In total, 46 American passengers from that ship contracted the virus.

Worldwide, there are now over 576,859 cases of coronavirus, and 26,455 deaths. The vast majority of cases and deaths had been confined to mainland China until the last three weeks, when major outbreaks occurred in South Korea, Italy and Iran. As of March 19, Italy has surpassed China in the number of deaths.

The increase in cases outside of China led the CDC to urge Americans to start preparing for the virus to spread in the U.S. with the “expectation that this will be bad.”

On March 11, President Donald Trump announced a ban on travel from the U.S. to Europe for 30 days to “keep new cases from entering our shores,” he said in an address from the Oval Office, beginning Friday at midnight. The CDC had already recommended that Americans cancel any non-essential travel to China, Iran, Italy and South Korea, and urged older Americans to avoid going to Japan. Additionally, they have restricted foreign nationals from China and Iran from entering the U.S.

The U.S., Canada and Mexico have mutually agreed to close the shared borders to non-essential travel.

Trump declared a national state of emergency in the U.S. on March 13 as the number of cases rise. However, the true number of cases is unknown, largely due to a delay in available testing kits from the government.

Though China, Italy and several other nations with high case totals have enforced full lockdowns on citizens, Trump has declined to do so in the U.S. Instead, many states, counties and cities have chosen to implement “stay at home” orders, limiting residents with non-essential jobs from leaving their homes, except for groceries and other vital tasks.

The CDC also says that the best prevention methods are basic forms of hygiene — careful handwashing, avoiding touching the face, moving away from people who are coughing or sneezing and staying home at signs of illness.

As information about the coronavirus pandemic rapidly changes, PEOPLE is committed to providing the most recent data in our coverage. Some of the information in this story may have changed after publication. For the latest on COVID-19, readers are encouraged to use online resources from CDC, WHO, and local public health departments and visit our coronavirus hub.