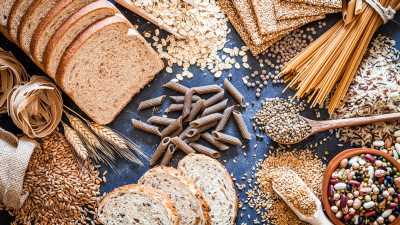 Eating more whole grains may protect against heart disease, an analysis of over 3000 middle- and older-aged American adults over many years indicates.

Those who ate at least three servings of whole grains daily had smaller increases in blood sugar levels, blood pressure, and waist size compared to those who ate less than one-half serving per day.

The lead researcher, Caleigh Sawicki, PhD, a nutritional epidemiologist formerly of Tufts University in Boston, says this is one of the first large and long-term studies of “

how people are actually living … that examined the relationship between intake of whole or refined grains and changes in certain risk factors that are early warning signs of disease, including waist size, blood pressure, and blood sugar.”

“This is an important step in understanding how different types of grains may influence health over time,” she told WebMD.

The results were published online on July 13 in the Journal of Nutrition.

People Don’t Eat Much Whole grain in the US

The Dietary Guidelines for Americans 2020-2025 recommend eating at least three servings of whole grains every day. Examples of one serving of whole grains includes a half-cup of brown rice or rolled oats.

Sawicki and her coauthors explain that in general, however, wholegrain intake is low in the US, with people eating less than one serving a day(ega 1 oz slice of bread, which typically contains 16 g of wholegrain).

In contrast, refined grain intake remains high, averaging 5–6 servings per day. Many prior studies have indicated that higher intake of refined grain is linked to a greater risk of heart and vascular disease. So, substituting wholegrains for refined grains could be a good dietary ploy to lower heart disease.

The scientists looked at people participating in the Framingham Heart Study Offspring Cohort, which began in the 1970s and was designed to examine long-term risk factors for heart disease. The average age at the start of the study was about 55 years old, and they followed them for approximately 18 years.

Participants were grouped into categories based on the amount of whole grains they reported eating, ranging from low whole grain intake (less than one-half serving every day) to three or more servings per day.

The greatest contributor to whole-grain intake among participants was whole-wheat breads and ready-to-eat whole-grain breakfast cereals. The refined grains came mostly from pasta and white bread

“This suggests that including whole grains, especially in place of refined grains, as part of a healthy diet could help us maintain healthier levels of these risk factors as we age, and, therefore, may help to prevent the development of heart disease,” Sawicki said.

Dietary fiber in whole grains may help promote a feeling of fullness and lower blood sugar spikes after meals, she further explained.

For their next steps, the researchers plan to see if eating more whole grains rather than refined grains leads to changes in the type of abdominal fat a person develops.

“Other research has shown that it may be excess visceral fat –which surrounds our organs– rather than overall body fat, that is more dangerous in terms of disease risk. We want to know whether whole or refined grain intake may be associated with changes in one type of fat more than the other,” explained Nicola McKeown, PhD, a scientist at the USDA Human Nutrition Research Center on Aging at Tufts University, and the senior author of the study.

Sawicki and McKeown disclose no relevant financial relationships. The study was funded independently.