Home » Health News » Why does it hurt so much when you hit your funny bone? 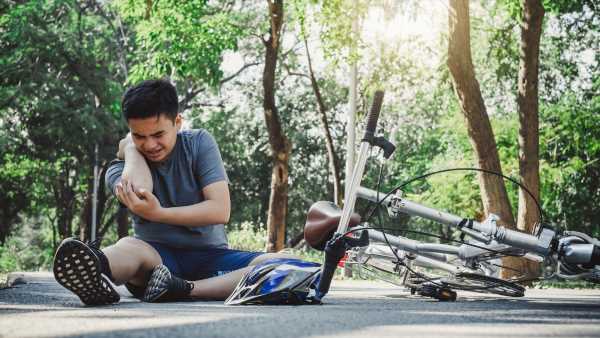 Even the slightest bump of the funny bone can send pain rippling up and down the arm and a string of bawdy expletives rippling off the tongue. So why does hitting this little region of the elbow cause so much discomfort?

The answer is pretty simple: It’s a nerve, not a bone, that is being hit.

To understand the source of this discomfort, let’s review a few key points of human anatomy. To begin, the funny bone is scientifically known as the ulnar nerve, which is the primary nerve in the arm. It travels from the spine through the neck, before snaking down the upper arm following a groove in the humerus, the bone that runs from the shoulder to the elbow. Past the elbow, the nerve travels past the ulna (the bone on the pinky side of the lower arm) and the radius (the bone on the thumb side of the lower arm) to the wrist. The ulnar nerve is responsible for transmitting information from some of the fingertips to the brain and back again. In particular, it allows a person to register sensations in their pinky and ring fingers, as well as to control some movement in the hand.

For most of the nerve’s journey, it is buffered by bone, muscle and fat. As it weaves past the elbow, the nerve runs through a small channel called the cubital tunnel. As it traverses this space, it runs past a bony hook at the elbow where the radius and ulna meet the humerus.

So why is this region so sensitive?

“When the nerve runs through a bony tunnel at your elbow, it is exposed,” said Dr. Dominic King,  a sports medicine physician at Cleveland Clinic’s Orthopaedic & Rheumatologic Institute. “When you hit the nerve against something hard, you compress it between the bone in your elbow and the hard surface that you hit.”

When it’s pushed against the bony ridge, the ulnar nerve experiences so-called ulnar nerve entrapment, or the rapid onset of sharp, electric shock-like pain that runs down the arm and into the hand, and an odd numbness down the limb.

“Nerves are the way we feel anything in the body,” King told Live Science. “This is one big nerve that is really close to the skin, and you are feeling complete nerve pain.”

Hitting the funny bone rarely causes any damage. While the pain typically subsides after a few minutes, it is enough to make a person contemplate wearing elbow guards at all times.

So, if it’s a nerve, why is it called the funny bone? The most reasonable explanation lies in the arm’s anatomy. Remember: The large bone that extends from the shoulder to the elbow is called the humerus. Get it? Humorous. Funny. If it’s a joke, it is a bad one.

—How many organs are in the human body?

—Why do I get sore days after I’ve worked out??

The second explanation lacks humor. It is based on the “funny” sensation a person experiences when the nerve is bumped, suggesting it was described by a person with a pretty high pain tolerance.

Other mammals also have a similar configuration, but they rarely experience the same problem. These animals are protected by more muscle mass around the sensitive nerve that builds up around the different ways animals move. The padding adds a level of protection against this not-so-funny experience.