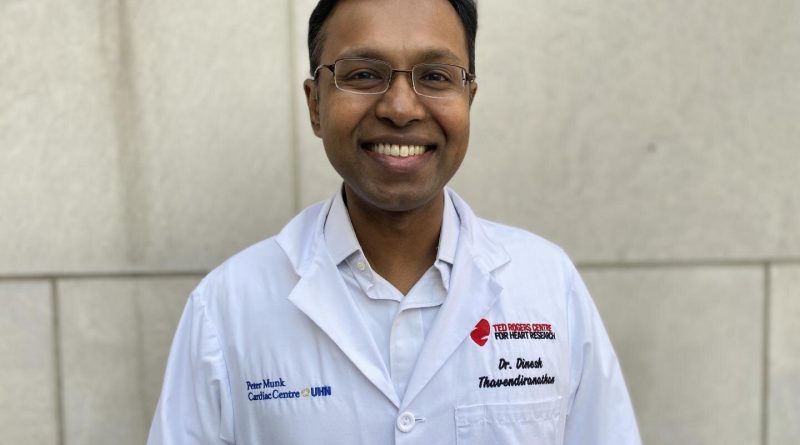 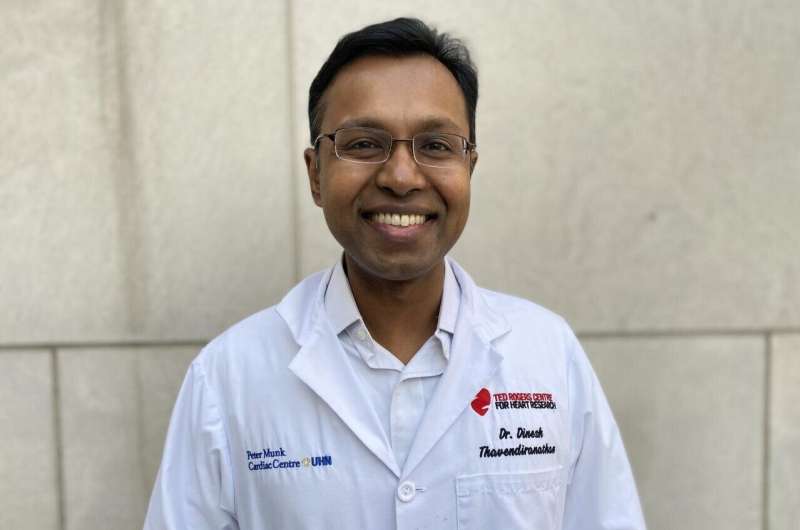 Unfortunately, for 1 in 20 high-risk patients, treating cancer with certain therapies means the added potential of developing heart failure. The one-year results of the highly anticipated trial compared heart function at the end of anthracycline-based chemotherapy, a treatment that can successfully treat cancer but also damage the heart, known as cardiotoxicity.

“When I was diagnosed, I was scared for my life,” says Sindhu Johnson, a breast cancer patient and one of 307 participants, 90% of which had breast cancer, enrolled in the trial.

“I was willing to undertake any treatment, but I understood my survival may come at a price. And that price included cardiotoxicity.”

Dr. Thavendiranathan is the lead of the Cardiotoxicity Prevention Program at the Ted Rogers Centre for Heart Research at the PMCC and a recognized leader in cardiotoxicity.

“We hoped our study would show a better way to care for cancer patients, who are already fighting one disease and should not have to worry about the future risk of heart failure too,” says Dr. Thavendiranathan.

LVEF measures how much blood is pumped out of the left ventricle of the heart with each contraction, whereas GLS measures deformation of the heart muscle.

“LVEF is the traditional imaging method, but we already know measuring GLS allows for a better identification of heart damage,” says Dr. Thavendiranathan. “What we didn’t know is if we can reduce the risk of cardiotoxicity by intervening once this early heart damage is detected.”

Published in the Journal of the American College of Cardiology, the “Strain Surveillance of Chemotherapy for Improving Cardiovascular Outcomes” (SUCCOUR) randomized controlled trial did not meet its primary outcome, as there was no difference in the continuous measure of heart function for all patients in the LVEF-guided and GLS-guided arms in both treated and untreated patients.

However, what’s of clinical importance are the patients whose abnormal change in heart function resulted in the initiation of therapy.

In these patients, the use of GLS-monitoring led to a lower reduction in heart function versus traditional monitoring. It also reduced the risk of cardiotoxicity, and heart damage was detected earlier and in twice the number of participants.

For oncologists and cardiologists, one of the primary concerns is how to prevent the development of cardiotoxicity in patients. The secondary outcome of the SUCCOUR trial proves by using GLS to monitor heart function and intervening with cardioprotective therapy when damage is detected, further reduction in heart function can be prevented and the risk of cardiotoxicity reduced.

“The purpose of a sensitive method like GLS is to pick up the presence of disease and treat it early,” says Dr. Thavendiranathan. “This means more patients will be treated, and if we start heart medications when a change is identified, we can prevent significant worsening of heart function.”

Sindhu, who was randomized into the GLS arm, joined the SUCCOUR trial knowing it may reduce the degree of cardiotoxicity she could potentially develop.

When a change in measurement alerted Dr. Thavendiranathan that the cancer therapy was damaging her heart, he initiated cardio-protective therapy—drugs that help improve heart function and prevent further damage.

By the end of her treatment, Sindhu’s heart function returned to normal and she did not develop cardiotoxicity.

“Our findings suggest we should consider changing how we follow patients during cancer therapy and add GLS to routine heart surveillance,” says Dr. Thavendiranathan, who co-led the study at 28 centres with Dr. Thomas Marwick of the Baker Heart and Diabetes Institute, and Dr. Tomoko Negishi of the Menzies Research Institute.

Dr. Thavendiranathan would like to see the GLS-measurement approach implemented in clinical practice.