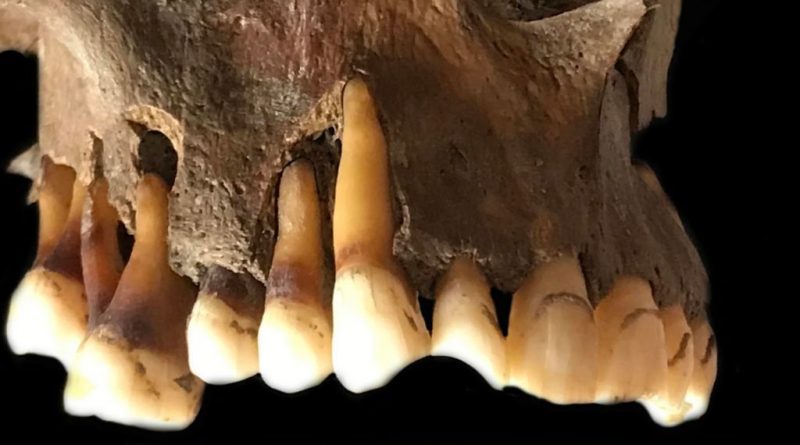 The herpes virus behind cold sores may have first spread widely about 5,000 years ago, possibly due to the rising popularity of kissing at the time, researchers say.

“Every primate species has a form of herpes, so we assume it has been with us since our own species left Africa,” co-senior author Christiana Scheib, a research fellow at the University of Cambridge’s St. John’s College and head of the Ancient DNA lab at the University of Tartu in Estonia, said in a statement (opens in new tab). “However, something happened around five thousand years ago that allowed one strain of herpes to overtake all others, possibly an increase in transmissions, which could have been linked to kissing.”

That’s the theory, anyway. Charlotte Houldcroft, co-senior author and leader of the Virus Genomics group in Cambridge University’s Department of Genetics, told The Guardian (opens in new tab) that more evidence is needed to solidify the link between Bronze Age make-out sessions and modern herpes. “Kissing is one of those behaviours that doesn’t fossilise well,” she said.

Herpes simplex virus 1 (HSV-1) is a type of herpes that most commonly causes cold sores, although it can also cause gential herpes, according to the World Health Organization (opens in new tab) (WHO). The lifelong infection often produces no symptoms but can sometimes cause painful blisters or open sores to appear at the site of infection. The latest estimates suggest that about 3.7 billion people under the age of 50, or about 67% of that age group, have an HSV-1 infection, and most of those affected acquire the infection in childhood or early adulthood through contact with virus-laden saliva, according to the Centers for Disease Control and Prevention (opens in new tab) (CDC).

In a new study, published July 27 in the journal Science Advances (opens in new tab), researchers suggest that the modern HSV-1 virus outcompeted other herpes variants during the Bronze Age, after people from the steppe grasslands of Eurasia traveled to Europe in mass migrations.

Prior to the study, the oldest herpes genomes ever recovered only dated to 1925, Houldcroft said in the statement.

The researchers looked to the roots of these individuals’ teeth to “dust” for genetic “fingerprints” of herpes viruses. Unlike bones in the body, teeth don’t regenerate, meaning they don’t ever replace their old cells with new ones. Because of this, and because viruses can infiltrate teeth via the bloodstream, teeth can provide a cumulative record of pathogens a person has encountered, Live Science previously reported.

—Thousands of new viruses discovered in the ocean

By comparing the newfound herpes DNA to that of 20th century herpes viruses, the researchers could estimate the virus’s mutation rate and thus trace the evolutionary history of the pathogen. Based on this analysis, they determined that HSV-1 likely emerged roughly 5,200 years ago, give or take a few hundred years. This may have coincided with Bronze Age migrations to Europe, during which the custom of romantic and sexual kissing likely became more widespread, the authors posit.

Although some Stone Age figurines could be interpreted as couples embracing, “the earliest known written record of kissing is a Bronze Age manuscript from South Asia,” the study authors wrote. The armies of Alexander the Great may have brought the custom to the Mediterranean around 300 B.C., and then in the first century A.D., “the [Roman] Emperor Tiberius is said to have tried to ban kissing at official functions in an effort to stop the spread of disease (unclear whether the disease was herpes),” the authors wrote.

This increase in kissing likely helped HSV-1 spread and gain prominence over other circulating herpes viruses, the authors argue. “If you suddenly have a group of people who are kissing, which was not a universal human behaviour, that is an extra way to spread the virus,” Houldcroft told The Guardian. (Romantic kissing isn’t universally practiced in modern cultures, either, according to a 2015 study published in the journal American Anthropologist (opens in new tab).)

But again, this is just a theory. Even if romantic kissing did become more common during Bronze Age migrations, it’s unclear how much influence these snogging sessions would have had on the evolution of herpes viruses. The authors note that, earlier in history, most people likely caught herpes from their family members in childhood, similar to how, in modern times, most people catch HSV-1 in childhood and not through romantic kissing.

Nicoletta Lanese is a staff writer for Live Science covering health and medicine, along with an assortment of biology, animal, environment and climate stories. She holds degrees in neuroscience and dance from the University of Florida and a graduate certificate in science communication from the University of California, Santa Cruz. Her work has appeared in The Scientist Magazine, Science News, The San Jose Mercury News and Mongabay, among other outlets.