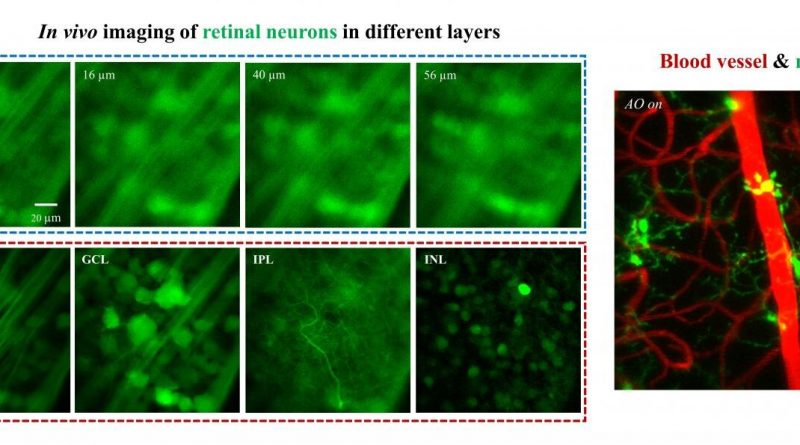 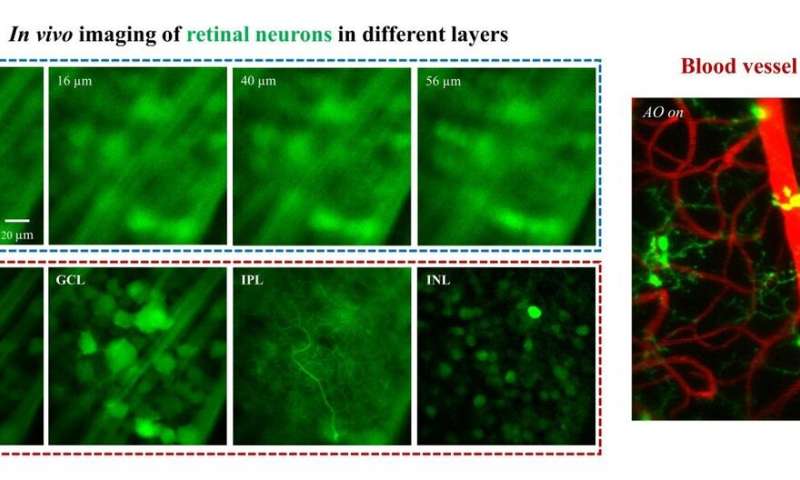 The retina is the only part of the central nervous system (CNS) that can be visualized noninvasively with optical imaging approaches. Direct retinal imaging plays an important role not only in understanding the diseased eye and ocular therapeutic discovery, but also study of a variety of well-defined CNS disorders. Accumulated evidence has shown that certain neurodegenerative diseases that affect the brain and spinal cord also have manifestations in the retina, and ocular symptoms always precede traditional diagnosis of such diseases, such as Alzheimer’s disease, Parkinson’s disease and multiple sclerosis.

But as prevalent retinal imaging tools provide limited resolution, photos taken previously are often inadequate to resolve the subcellular structures and dynamics of retinal neurons, mainly attributed to the large optical aberrations of the living eye.

In a recent breakthrough, a team of scientists at the Hong Kong University of Science and Technology developed an adaptive optics two-photon excitation fluorescence microscopy (AO-TPEFM) using direct wavefront sensing for high-resolution in vivo fluorescence imaging of mouse retina, which allow in vivo fundus imaging at an unprecedented resolution after full AO correction. The advance will provide a much-needed tool to study biological processes in the retina, and would also shed new light on neurodegenerative diseases in the central nervous system (CNS).

Their work was published in the journal Light: Science & Applications on May 6, 2020.

“In this work, we advance two-photon microscopy for near-diffraction-limited and functional retinal imaging in living mice,” said Prof. Jianan Qu, lead researcher and Professor at the Department of Electronic and Computer Engineering, HKUST. “The localized two-photon fluorescence signals were used as nonlinear guide stars to achieve accurate measurement of ocular aberrations at the imaging location. We demonstrate that depth-resolved structures in different retinal layers can be resolved allowing for a wide range of studies which are infeasible otherwise.”

AO is a technology used to improve the performance of an optical system by deforming a mirror in order to correct for the distortion(s). AO was first invented to remove the effects of atmospheric distortion in astronomical telescopes and laser communication systems.