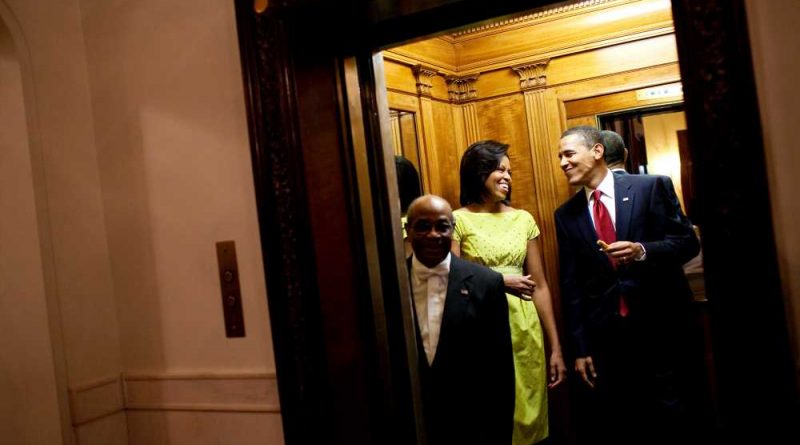 A longtime White House butler, who served 11 presidents over the course of his tenure, died after contracting the coronavirus (COVID-19). He was 91.

Wilson Roosevelt Jerman died last weekend, his granddaughter Jamila Garrett confirmed to WTTG. He served as a cleaner, doorman and butler between 1957 and 2012.

Garrett said Jerman was first employed as a White House cleaner during Dwight D. Eisenhower's presidency, receiving a promotion to butler in the 1960s when John F. Kennedy sat in the Oval Office.

“Jackie O actually promoted him to a butler because of the relationship. She was instrumental in ensuring that that happened,” Garrett told the outlet of the former first lady.

Jerman also had a bond with the Bush family, according to his granddaughter.

"When Bush Sr. became president, moved his family into the White House, George Bush Jr. has a little trouble adapting to a new environment, some trouble sleeping," she said. "Well, my grandfather would actually sit with him in his bedroom until he fell asleep."

Never miss a story — sign up for PEOPLE's free daily newsletter to stay up-to-date on the best of what PEOPLE has to offer, from juicy celebrity news to compelling human interest stories

A photo of Jerman standing and smiling alongside former President Barack Obama and former first lady Michelle Obama — the last first family he served — was included in Michelle's 2018 memoir Becoming.

Jerman and his wife had five children, 12 grandchildren and 18 grandchildren, according to WTTG. Due to the pandemic, the family will hold a virtual funeral service.

Garrett said Jerman was a "family-loving, genuine man" who "was always about service, service to others, and it didn’t matter who you were or what you did or what you needed, whatever that he could provide, he would.”

“I want the world to remember my grandfather as someone who was really authentic,” Garrett told WTTG. “Always be yourself — that’s what he taught our family, that’s what thrives throughout our family. And that’s what we’ll continue to carry on, his legacy.”

As information about the coronavirus pandemic rapidly changes, PEOPLE is committed to providing the most recent data in our coverage. Some of the information in this story may have changed after publication. For the latest on COVID-19, readers are encouraged to use online resources from CDC, WHO, and local public health departments. PEOPLE has partnered with GoFundMe to raise money for the COVID-19 Relief Fund, a GoFundMe.org fundraiser to support everything from frontline responders to families in need, as well as organizations helping communities. For more information or to donate, click here.