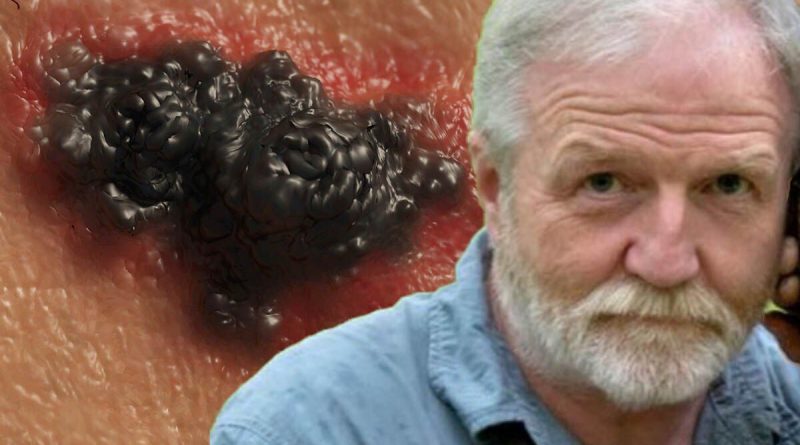 Skin cancer: Dr Chris outlines the signs of a melanoma

Having become accustomed to travelling the world, nothing prepared McGavin for the news of his skin cancer. The presenter first noticed some unusual signs back in 2017, when a black dot on his right heel suddenly appeared. Although not alarmed by the sight, the biologist sought medical help, but was initially reassured that the mark was just a verruca. For the next eight months, McGavin remained unaware that the mysterious dot was in fact a rare form of melanoma, which if left untreated could have killed him within a year.

“I told them there was a little dark mark on my heel,” The One Show regular recalls. “It wasn’t hurting me but it was a bit of an oddity.”

With a history in biology, McGavin started to speculate himself what the mark could be. He continued to say: “I wondered if it was a blood blister.

“They looked at it briefly and insisted it was a verruca. I asked them if they were sure because I had never had a verruca before, but they insisted, ‘George, that’s what it is.’

“For the next eight months, I was filing this thing with an emery board and applying cream. Now I know this was very bad as it grew from a stage one to a stage three cancer in that time.”

With his disease rapidly spreading, it wasn’t until McGavin noticed another mark on his body. This time, it was an itchy patch on the side of his head.

“I was sent to a specialist who said it was a little basal cell carcinoma,” McGavin recalled. “They were able to freeze it off. My wife had told me to ask the specialist to take a look at my heel too.

“When she did, I knew before she spoke that it was really bad news. Her face just fell.

“I had a rare form of skin cancer called acral melanoma that can either begin on your hands, toenails or feet. It is more common in Africans and Asians than white people and it’s actually the kind that killed Bob Marley.

“I was in such a state of shock. You hear the words ‘malignant melanoma’ and you feel sick.”

From bad to worse, after further tests McGavin was told that the seemingly harmless dot on his heel had spread to the lymph nodes in his groin and hip, putting his life on the line.

The Skin Cancer Foundation explains that melanomas present in many different shapes, sizes and colours, making them extremely tricky to diagnose or predict a set of warning signs. However, early detection is vital in being able to fully treat the condition.

The most common form of melanoma is known as superficial spreading melanoma, which can arise in an existing mole, or appear as a new lesion. While it can be found nearly anywhere on the body, it is most likely to appear on the torso in men, the legs in women and the upper back in both.

A lump may appear as either flat or slightly raised and discoloured including shades of tan, brown, black, red and pink. Other common types of melanoma include the following:

McGavin’s melanoma, known as basal cell carcinoma (BCC) begins in the basal cells – which work to produce new skin cells as old ones die off. Often appearing as a slightly transparent bump on the skin, the condition typically affects areas of the skin most exposed to the sun such as the head and neck.

Importantly, The Skin Cancer Foundation adds that usually, two or more of these “warning signs and symptoms” are apparent in a BCC tumour.

For those who have suffered from a BCC in the past and received treatment, it can easily recur. Specifically, tumours on the nose, ears and lips are more likely to recur, usually within the first two years after surgery.
“It had spread and they needed to start treatment ­immediately,” McGavin added, speaking about his treatment process. “I was really alarmed.”

Yet by pure coincidence, a new set of drugs, which usually costs thousands, had been given the go ahead just three weeks before his diagnosis to combat the disease. Due to this, rather than receiving chemotherapy, the broadcaster was put on a dose of two sets of tablets, dabrafenib and trametinib, daily.

He added: “They were only licensed a few weeks before I was told I had cancer and so although it was very bad luck I had the disease, it was fantastic luck I was able to take them. My cancer has a gene which has gone wrong. Instead of dividing and dying, the cells just divide and divide. The drugs target this gene. If they work well, all the cells die. They are a fantastic breakthrough.”

By sharing his story in the 2019 documentary, McGavin hoped that he would inspire others to go and get mysterious and strange spots, lumps and bumps checked out by their GP. “If I’d had mine checked, it would have been a stage one cancer, cut out and stitched up,” he concluded.