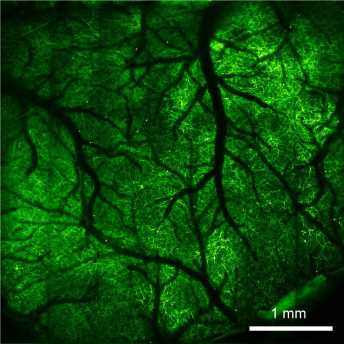 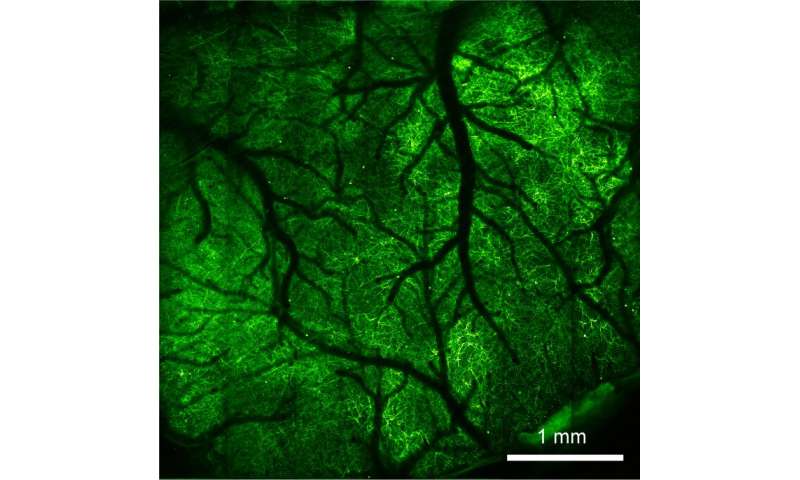 Electrical and chemical signals flash through our brains constantly as we move through the world, but it would take a high-speed camera and a window into the brain to capture their fleeting paths.

University of California, Berkeley, investigators have now built such a camera: a microscope that can image the brain of an alert mouse 1,000 times a second, recording for the first time the passage of millisecond electrical pulses through neurons.

“This is really exciting, because we are now able to do something that people really weren’t able to do before,” said lead researcher Na Ji, a UC Berkeley associate professor of physics and of molecular and cell biology.

The new imaging technique combines two-photon fluorescence microscopy and all-optical laser scanning in a state-of-the-art microscope that can image a two-dimensional slice through the neocortex of the mouse brain up to 3,000 times per second. That’s fast enough to trace electrical signals flowing through brain circuits.

With this technique, neuroscientists like Ji can now clock electrical signals as they propagate through the brain and ultimately look for transmission problems associated with disease.

One key advantage of the technique is that it will allow neuroscientists to track the hundreds to tens of thousands of inputs any given brain cell receives from other brain cells, including those that don’t trigger the cell to fire. These sub-threshold inputs—either exciting or inhibiting the neuron—gradually add up to a crescendo that triggers the cell to fire an action potential, passing information along to other neurons.

From electrodes to fluorescence imaging

The typical method for recording electrical firing in the brain, via electrodes embedded in the tissue, detects only blips from a few neurons as the millisecond voltage changes pass by. The new technique can pinpoint the actual firing neuron and follow the path of the signal, millisecond by millisecond.

“In diseases, many things are happening, even before you can see neurons firing, like all the subthreshold events,” said Ji, a member of UC Berkeley’s Helen Wills Neuroscience Institute. “We’ve never looked at how a disease will change with subthreshold input. Now, we have a handle to address that.”

Ji and her colleagues reported the new imaging technique in the March issue of the journal Nature Methods. In the same issue, she and other colleagues also published a paper demonstrating a different technique for imaging calcium signaling over much of an entire hemisphere of the mouse brain at once, one that uses a wide-field-of-view “mesoscope” with two-photon imaging and Bessel focus scanning. Calcium concentrations are linked with voltage changes as signals are transmitted through the brain.

“This is the first time anyone has shown in three dimensions the neural activity of such a large volume of the brain at once, which is far beyond what electrodes can do,” Ji said. “Furthermore, our imaging approach gives us the ability to resolve the synapses of each neuron.”

Synapses are the spots where neurotransmitters are released by one neuron to excite or inhibit another.

One of Ji’s goals is to understand how neurons interact across large areas of the brain and eventually locate diseased circuits linked to brain disorders.

“In brain disorders, including neurodegenerative disease, it’s not just a single neuron or a few neurons that get sick,” Ji said. “So, if you really want to understand these illnesses, you want to be able to look at as many neurons as possible over different brain regions. With this method, we can get a much more global picture of what is happening in the brain.”

Ji and her colleagues are able to peer into the brain thanks to probes that can be pinned to specific types of cells and become fluorescent when the environment changes. To track voltage changes in neurons, for example, her team employed a sensor developed by co-author Michael Lin of Stanford University that becomes fluorescent when the cell membrane depolarizes as a voltage signal propagates along the cell membrane.

The researchers then illuminate these fluorescent probes with a two-photon laser, which makes them emit light, or fluoresce, if they have been activated. The emitted light is captured by a microscope and combined into a 2-D image that shows the location of the voltage change or the presence of a specific chemical, such as the signaling ion, calcium.

By rapidly scanning the laser over the brain, much like a flashlight that gradually reveals the scene inside a darkened room, researchers are able to obtain images of a single, thin layer of the neocortex. The team was able to conduct 1,000 to 3,000 full 2-D scans of a single brain layer every second by replacing one of the laser’s two rotating mirrors with an optical mirror—a technique called free-space angular-chirp-enhanced delay (FACED). FACED was developed by paper co-author Kevin Tsia at the University of Hong Kong.

The kilohertz imaging not only revealed millisecond changes in voltage, but also more slowly changing concentrations of calcium and glutamate, a neurotransmitter, as deep as 350 microns (one-third of a millimeter) from the brain’s surface.

To obtain rapid 3-D images of the movement of calcium through neurons, she combined two-photon fluorescent microscopy with a different technique, Bessel focus scanning. To avoid time-consuming scans of every micron-thick layer of the neocortex, the excitation focus of the two-photon laser is shaped from a point to a small cylinder, like a pencil, about 100 microns in length. This pencil beam is then scanned at six different depths through the brain, and the fluorescent images are combined to create a 3-D image. This allows more rapid scanning with little loss of information because in each pencil-like volume, typically only one neuron is active at any time. The mesoscope can image an area about 5 mm in diameter—nearly a quarter of one hemisphere of the mouse brain—and 650 microns deep, close to the full depth of the neocortex, which is involved in complex information processing.

“Using conventional methods, we would have to scan 300 images to cover this volume, but with an elongated beam that collapses the volume onto a single plane, we only need to scan six images, which means that now we can have a fast enough volumetric rate to look at its calcium activity,” Ji said.