Home » Health News » Kelly Ripa, 50, Shows Off Her Toned Butt In A Cheeky New Instagram Photo With Her Husband 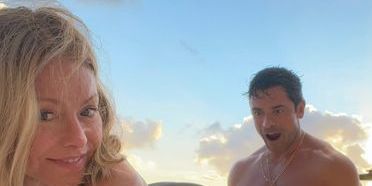 Kelly Ripa and Mark Consuelos are known for their hilarious, flirty banter on Instagram. But Kelly just dropped a pic that just might be her best yet.

“When the end is in sight……😜,” Kelly, 50, wrote in the caption. But it’s the photo that’s everything. In it, Kelly is working a gorgeous one-piece bathing suit and bending over with her butt aimed in the direction of Mark. He looks blown away, while staring at her butt, and fair—it’s super toned.

The comments were hilarious. Some people pointed out that the couple’s daughter Lola is going to “have a fit” over the cheeky post, while others flooded the comments with fire emojis. Mark wrote, “Okay🔥🔥🔥♥️♥️♥️”

It’s good Mark is showing his appreciation, because Kelly works hard for that booty. Kelly’s major mode of fitness is taking dance-based classes with Anna Kaiser, a former dancer and the founder of AKT fitness studio in New York City.

Kaiser’s workouts mix dancing with high-intensity intervals. “The best thing about the marriage of dance and HIIT is that you’re moving on multiple planes of motion and you’re having fun,” Kaiser previously told Women’s Health. “You really need to focus on different types of muscular contractions and angles, not just on getting through exercises for the sake of feeling a burn. If you do the same motions over and over, you’re not going to get the full benefit.”

Kelly shows up, too—she works out up to five days a week, doing 60- to 90-minute sessions with Kaiser.

It’s not just Kelly’s booty that benefits: Her abs are total fire. Kaiser says they do a lot together to work on her core (including, yep, her butt). “Every exercise we do works your full core—the butt, the abs, and the back—at the same time,” Kaiser said. “If you’re training functionally, you’re hitting those muscles from all planes of motion.”

While Kelly is huge into AKT fitness, she also throws yoga into the mix here and there. “I deep-breathe, and I do a lot of yoga,” Kelly previously told Good Housekeeping, adding that she’s especially into “power yoga.”

FWIW: Kelly wasn’t always this into fitness. “It would have never have occurred to me to exercise before I had kids. Ever. Now, I find that I need it to clear my head,” Kelly told Women’s Health. “I need strength and stamina because raising kids is the toughest job there is. And it’s the most rewarding—but it’s exhausting, and it’s hard work. My childless self would have died laughing seeing me in a gym.”

After her cheeky post, everyone’s definitely laughing with Kelly RN.