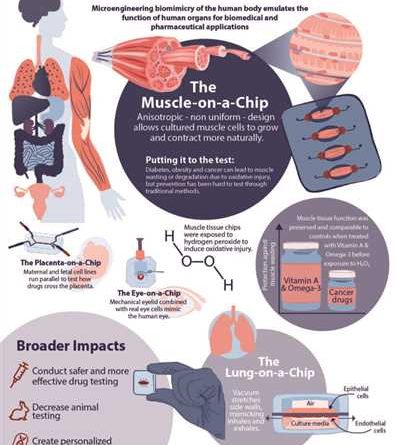 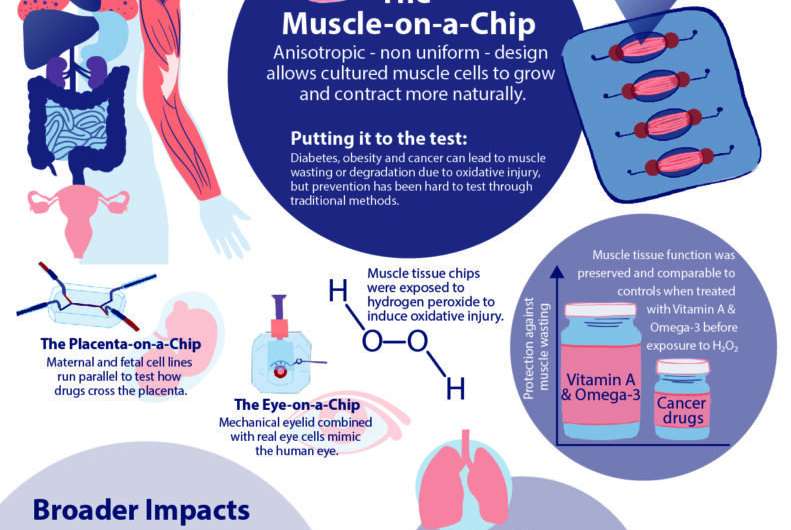 Studying drug effects on human muscles just got easier thanks to a new “muscle-on-a-chip,” developed by a team of researchers from Penn’s School of Engineering and Applied Science and Inha University in Incheon, Korea.

Muscle tissue is essential to almost all of the body’s organs, however, diseases such as cancer and diabetes can cause muscle tissue degradation or “wasting,” severely decreasing organ function and quality of life. Traditional drug testing for treatment and prevention of muscle wasting is limited through animal studies, which do not capture the complexity of the human physiology, and human clinical trials, which are too time consuming to help current patients.

An “organ-on-a-chip” approach can solve these problems. By growing real human cells within microfabricated devices, an organ-on-a-chip provides a way for scientists to study replicas of human organs outside of the body.

This research was published in Science Advances and was led by Dan Huh, Associate Professor in the Department of Bioengineering, and Mark Mondrinos, then a postdoctoral researcher in Huh’s lab and currently an Assistant Professor of Biomedical Engineering at Tulane University. Their co-authors included Cassidy Blundell and Jeongyun Seo, former Ph.D. students in the Huh lab, Alex Yi and Matthew Osborn, then research technicians in the Huh lab, and Vivek Shenoy, Eduardo D. Glandt President’s Distinguished Professor in the Department of Materials Science and Engineering. Lab members Farid Alisafaei and Hossein Ahmadzadeh also contributed to the research. The team collaborated with Insu Lee and professors Sun Min Kim and Tae-Joon Jeon of Inha University.

In order to conduct meaningful drug testing with their devices, the research team needed to ensure that cultured structures within the muscle-on-a-chip were as close to the real human tissue as possible. Critically, they needed to capture muscle’s “anisotropic,” or directionally aligned, shape.

“In the human body, muscle cells adhere to specific anchor points due to their location next to ligament tissue, bones or other muscle tissue,” Huh says. “What’s interesting is that this physical constraint at the boundary of the tissue is what sculpts the shape of muscle. During embryonic development, muscle cells pull at these anchors and stretch in the spaces in between, similar to a tent being held up by its poles and anchored down by the stakes. As a result, the muscle tissue extends linearly and aligns between the anchoring points, acquiring its characteristic shape.”

“Using the chip in conjunction with a computational model, we found that when mechanical stress was generated in opposing directions during the sculpting of muscle tissue, the contractility, or the ability of a cell to contract, increased in the direction it was being pulled. This caused the alignment and stiffening of the extracellular matrix in that direction, which then signaled the cells to further increase their contractility,” says Huh. “Creating the 3D muscle tissue on the chip was key in discovering this new feedback mechanism.”

The muscle chip was used for studying more than just the size, shape and strength of the cultured muscle cells; it allowed the team to investigate how naturally occurring mechanical forces during muscle development affect the differentiation of stem cells into muscle cells. To find out, the team cultured mesenchymal stem cells, a specialized cell type that can turn into a variety of tissues such as muscles, fat, tendons and bones.

The team found that the anisotropic design of the muscle tissue on the chip did affect mesenchymal stem cell differentiation and produced more than three times as many muscle cells as the control group where the stem cells were cultured in an isotropic hydrogel. This highlighted the value of their system for studying how mechanics contribute to morphogenesis and development of anisotropic tissues in the human body.

The success in the anisotropic design meant that the team could run experiments on induced muscle degradation and preventative drug therapies. To demonstrate the proof of concept, they first used a chemical to induce acute injury of engineered skeletal muscle tissues in their chip. This model was then used to test the efficacy of PARP enzyme inhibitors, drugs that treat skeletal muscle injury, as well as a vitamin A derivative and an omega-3 fatty acid, dietary supplements that combat oxidative injury.

“Diseases like diabetes, obesity and cancer can cause oxidative injury,” says Huh. “Essentially, the muscle tissue breaks down due to an increase in toxic reactive oxygen species, or ROS, which triggers skeletal muscle cellular death and inflammation.”

The next phase of the study was geared towards modeling cancer cachexia, a systemic wasting disorder characterized by a progressive loss of skeletal muscle tissue that affects between 50 to 80 percent of cancer patients and contributes to 20 percent of cancer fatalities. Because cancer cachexia is most common in patients with drug-resistant tumors, the team only focused on those in their study.

“Our first goal in this work was to build an advanced in vitro system that would include physiological human skeletal muscle interacting with drug-resistant tumors. To this end, we first exposed cultured lung cancer cells to cisplatin, a common chemotherapy drug,” says Huh. “We then used the tumor cells that survived the drug treatment to form three-dimensional tumor spheroids and put them into a modified version of our muscle-on-a-chip system.

“Interestingly, the tumors spontaneously induced oxidative and inflammatory injury of the muscle tissue and decreased its metabolic capacity, similar to what happens during muscle wasting in cancer patients,” continues Huh. “Our data also showed that pre-treatment of the cultures with the combination of vitamin A and omega-3 had protective effects, suggesting the potential benefits of these dietary supplements as preventative measures against cancer cachexia.”

The muscle-on-a-chip in this study proved to be capable of more than just accurately representing the anisotropic nature of the human body. It also showed how drugs and vitamins could prevent muscle wasting. Future research from this team will expand this drug testing on other fabricated organs and their work will continue to improve the three-dimensionality of their organ-on-a-chip design.