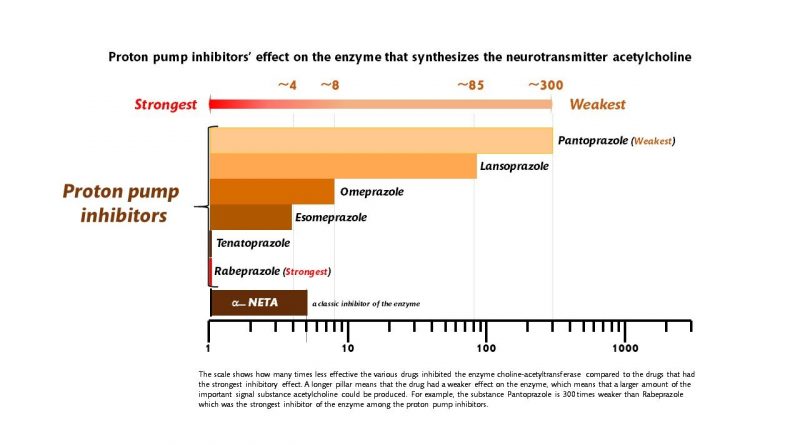 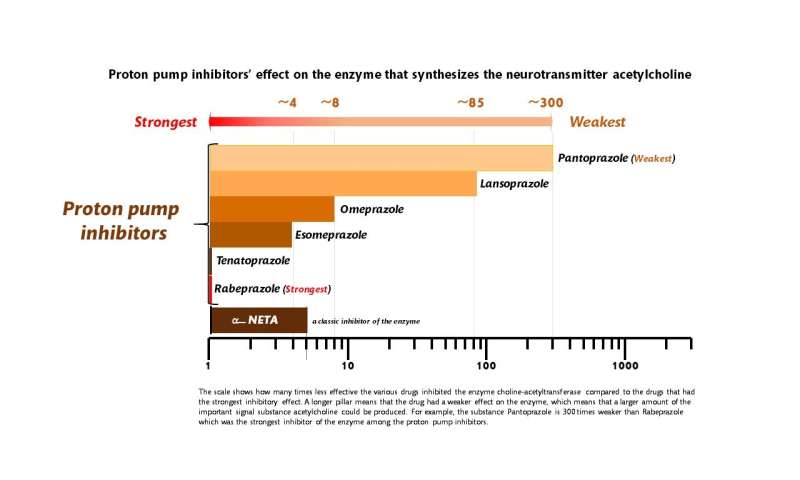 Millions of people around the world use proton pump inhibitors for conditions like heartburn, gastritis and stomach ulcers. Researchers at Karolinska Institutet in Sweden now report that the long-term use of these drugs could increase the risk of developing dementia. Their results are published in the journal Alzheimer’s & Dementia.

“We’ve been able to show that proton pump inhibitors affect the synthesis of the neurotransmitter acetylcholine, which plays a significant part in conditions such as Alzheimer’s disease,” says Taher Darreh-Shori, senior researcher at the Department of Neurobiology, Care Sciences and Society, Karolinska Institutet. “Since there’s no effective treatment for the disease, it’s important to avoid risk factors. We therefore want to draw attention to this so that the drugs aren’t used needlessly for a long time.”

Proton pump inhibitors (PPIs) work by blocking the pumps that transport acidic hydrogen ions from the cells that form the mucosa. When the pumps are out of action, there is a reduction in acid, and ultimately, the corrosive damage it does to tissue. Population studies have previously shown higher rates of dementia in people using PPIs, but the connection was unclear until now.

First, the researchers used 3-D computer simulations to examine how six PPI variants based on different active substances interacted with an enzyme called choline acetyletransferase, the function of which is to synthesize the neurotransmitter acetylcholine. As a neurotransmitter, acetylcholine is needed for passing signals among nerve cells, but this only works if enough of the substance is produced. The simulations showed that all the tested drugs were able to bind with the enzyme.

The researchers then analyzed the effect of this binding. They found that all the drugs inhibited the enzyme, resulting in a reduced production of acetylcholine, where the stronger the binding, the stronger the inhibitory effect. Drugs based on the active substances omeprazole, esomeprazole, tenatoprazole and rabeprazole had the greatest affinity and were therefore the strongest inhibitors of the enzyme, while the variants pantoprazole and lansoprazole were the weakest (see illustration).

Complementary studies are now needed to examine whether these laboratory observations represent what occurs in the body. However, Darreh-Shori is already advising against the overuse of PPIs.

“Special care should be taken with the more elderly patients and those already diagnosed with dementia,” he says. “The same also applies to patients with muscle weakness diseases such as ALS, as acetylcholine is an essential motor neurotransmitter. In such cases, doctors should use the drugs that have the weakest effect and prescribe them at lowest dose and for as short a time as possible.”