Drinking filtered coffee could cut your risk of getting type 2 diabetes, a study has shown.

Researchers say the papers which the coffee is strained through catch molecules that may affect blood sugar levels.

Scientists compared the effects of filtered and boiled coffee – when ground beans are added directly to the water.

No other types of coffee – including instant – were analysed in the research, which tracked hundreds of volunteers for seven years.

Participants who drank up to three filtered coffees a day were 60 per cent less likely to get type 2 diabetes, compared to boiled coffee fans. 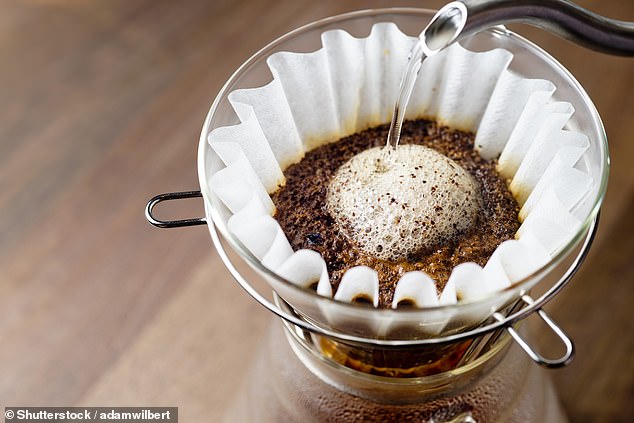 Drinking filtered coffee either made manually or with a machine could cut your risk of type 2 diabetes by 60 per cent compared with boiled coffee, a study has shown

Co-author of the study, Professor Rikard Landberg, said: ‘Our results now clearly show filtered coffee has a positive effect in terms of reducing the risk of developing type 2 diabetes.’

But Professor Landberg added that boiled coffee does not have this effect. Despite having no proof, he also said espressos would be similarly useless.

It is unclear whether instant coffee would be more similar to filtered or boiled coffee because it was not studied.

Instant, where boiling water is added to coffee granules, is the most common type consumed by coffee drinkers in the UK.

Filtered coffee refers to methods in which finely ground coffee beans are placed in a filter, and then water passes through, either in a machine or manually.

WHAT ARE THE HEALTH BENEFITS OF COFFEE?

Scientific studies into the health effects of coffee are being done all the time and have, in the past, claimed the drink brings fairly big health benefits.

Research by the National Cancer Institute in the US last year found people who drink six or seven cups of coffee each day were 16 per cent less likely to die from disease within a 10-year period than those who didn’t.

Less likely to get depression

Another study, done by the Harvard School of Public Health, found that women who drank four or more cups of coffee per day were 20 per cent less likely to suffer from depression.

British scientists at Goldsmiths, University of London, found women who drank coffee – 250mg of caffeine, to be precise – tended to have a higher pain threshold than those who didn’t.

The Institute for Scientific Information on Coffee last year said it had trawled through nearly 30 studies of almost 1.2million people to find drinking three or four cups of coffee each day could slash the risk of developing type 2 diabetes by 27 per cent.

Boiled coffee is when coarsely ground coffee beans are added directly to the water. This method also includes Turkish and Greek coffee.

The study, by Chalmers University of Technology and Umeå University, involved 842 people from the Västerbotten region of northern Sweden.

Sweden is one of the countries with the highest filtered coffee intake worldwide. Some seven per cent of their population has diabetes.

Half of those who took part had developed type 2 diabetes by the end. The findings were published in the Journal of Internal Medicine.

Blood samples which had been collected at the start of the study in the 1990s were analysed using a technique called metabolomics.

Metabolomics makes it possible for doctors to identify the blood concentration of specific molecules, including diterpenes.

It means researchers don’t need to rely solely on participants’ food and drink diaries, which are often inaccurate.

Professor Landberg and colleagues found 32 markers in the blood were strongly linked to filtered coffee and 24 to boiled coffee.

With the use of these markers, the researchers were able to show that people who drank filtered coffee were less likely to develop type 2 diabetes.

Diterpenes, naturally present in coffee, have been linked to high cholesterol, high blood pressure, and heart and vascular diseases.

The authors concluded: ‘Our study supports a protective role of habitual intake of ﬁltered coffee on type 2 diabetes development.’

Previous studies have shown boiled coffee increases the risk of heart and vascular diseases and high ‘bad’ cholesterol due to the presence of diterpenes.

Professor Landberg said: ‘It has been shown when you filter coffee, the diterpenes are captured in the filter.

‘As a result, you get the health benefits of the many other molecules present, such as different phenolic substances.