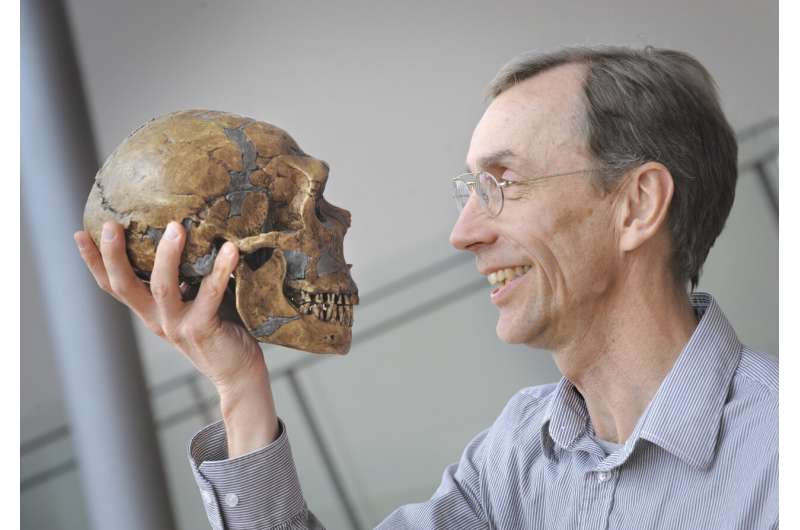 Swedish scientist Svante Paabo won this year’s Nobel Prize in medicine Monday for his discoveries on human evolution that provided key insights into our immune system and what makes us unique compared with our extinct cousins, the award’s panel said.

Paabo has spearheaded the development of new techniques that allowed researchers to compare the genome of modern humans and that of other hominins—the Neanderthals and Denisovans.

While Neanderthal bones were first discovered in the mid-19th century, only by unlocking their DNA—often referred to as the code of life—have scientists been able to fully understand the links between species.

This included the time when modern humans and Neanderthals diverged as a species, determined to be around 800,000 years ago,

“Paabo and his team also surprisingly found that gene flow had occurred from Neanderthals to Homo sapiens, demonstrating that they had children together during periods of co-existence,” Wedell said.

This transfer of genes between hominin species affects how the immune system of modern humans reacts to infections, such as the coronavirus. People outside Africa have 1-2% of Neanderthal genes. 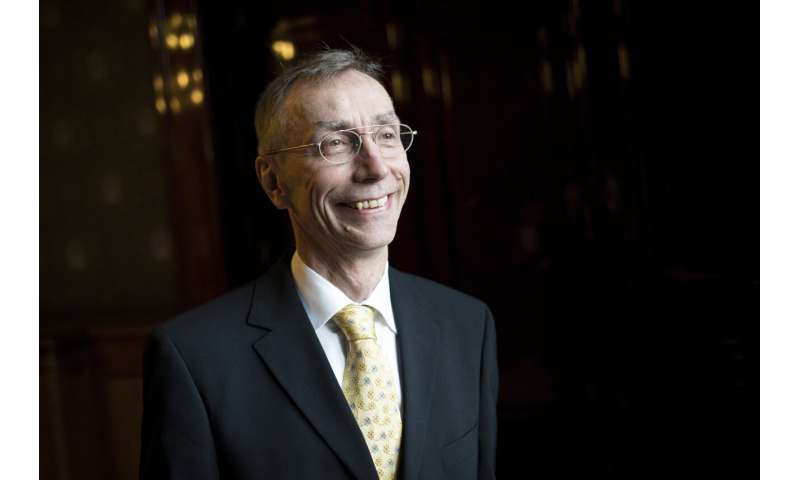 Paabo and his team also managed to extract DNA from a tiny finger bone found in a cave in Siberia, leading to the recognition of a new species of ancient humans they called Denisovans.

Wedell described this as “a sensational discovery” that subsequently showed Neanderthals and Denisovan to be sister groups which split from each other around 600,000 years ago. Denisovan genes have been found in up to 6% of modern humans in Asia and Southeast Asia, indicating that interbreeding occurred there too.

“By mixing with them after migrating out of Africa, homo sapiens picked up sequences that improved their chances to survive in their new environments,” said Wedell. For example, Tibetans share a gene with Denisovans that helps them adapt to the high altitude.

“We already know that it affects our defenses against different types of infections for instance, or how we can cope with high altitude,” said Nils-Goran Larsson, a member of the Nobel panel. “But like all great discoveries in basic science, more and more insights will come over the next decades.” 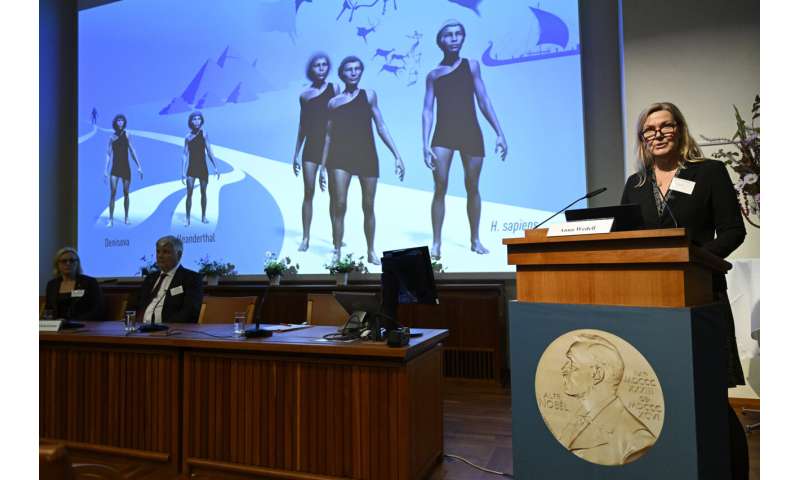 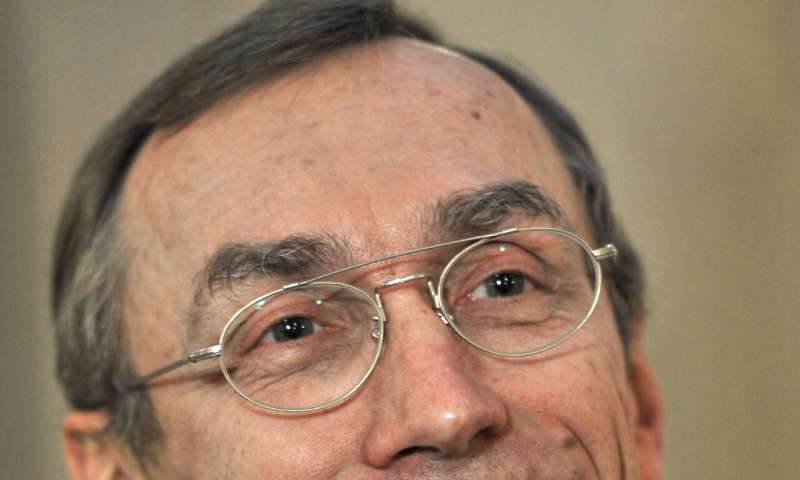 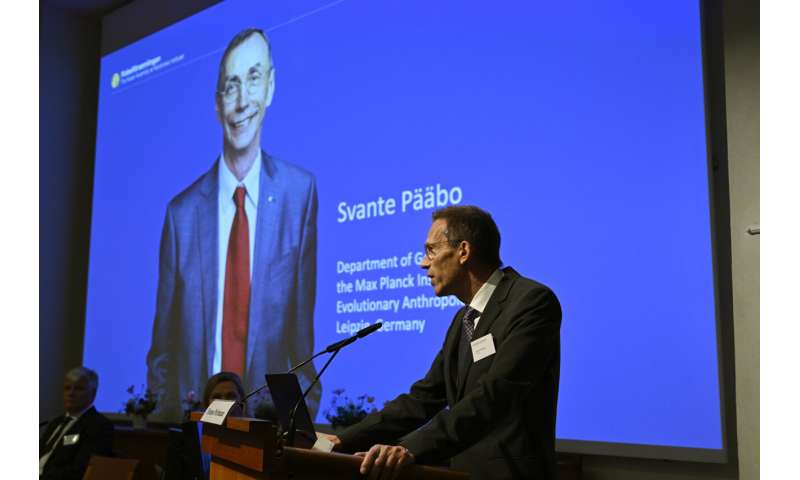 Paabo, 67, performed his prizewinning studies in Germany at the University of Munich and at the Max Planck Institute for Evolutionary Anthropology in Leipzig. Paabo is the son of Sune Bergstrom, who won the Nobel prize in medicine in 1982.

The medicine prize kicked off a week of Nobel Prize announcements. It continues Tuesday with the physics prize, with chemistry on Wednesday and literature on Thursday. The 2022 Nobel Peace Prize will be announced on Friday and the economics award on Oct. 10.

Last year’s medicine recipients were David Julius and Ardem Patapoutian for their discoveries into how the human body perceives temperature and touch.

The prizes carry a cash award of 10 million Swedish kronor (nearly $900,000) and will be handed out on Dec. 10. The money comes from a bequest left by the prize’s creator, Swedish inventor Alfred Nobel, who died in 1895.

The Nobel Assembly at Karolinska Institutet

has today decided to award

the 2022 Nobel Prize in Physiology or Medicine

Humanity has always been intrigued by its origins. Where do we come from, and how are we related to those who came before us? What makes us, Homo sapiens, different from other hominins?

Through his pioneering research, Svante Pääbo accomplished something seemingly impossible: sequencing the genome of the Neanderthal, an extinct relative of present-day humans. He also made the sensational discovery of a previously unknown hominin, Denisova. Importantly, Pääbo also found that gene transfer had occurred from these now extinct hominins to Homo sapiens following the migration out of Africa around 70,000 years ago. This ancient flow of genes to present-day humans has physiological relevance today, for example affecting how our immune system reacts to infections.

Pääbo’s seminal research gave rise to an entirely new scientific discipline; paleogenomics. By revealing genetic differences that distinguish all living humans from extinct hominins, his discoveries provide the basis for exploring what makes us uniquely human.

Where do we come from?

The question of our origin and what makes us unique has engaged humanity since ancient times. Paleontology and archeology are important for studies of human evolution. Research provided evidence that the anatomically modern human, Homo sapiens, first appeared in Africa approximately 300,000 years ago, while our closest known relatives, Neanderthals, developed outside Africa and populated Europe and Western Asia from around 400,000 years until 30,000 years ago, at which point they went extinct. About 70,000 years ago, groups of Homo sapiens migrated from Africa to the Middle East and, from there they spread to the rest of the world. Homo sapiens and Neanderthals thus coexisted in large parts of Eurasia for tens of thousands of years. But what do we know about our relationship with the extinct Neanderthals? Clues might be derived from genomic information. By the end of the 1990’s, almost the entire human genome had been sequenced. This was a considerable accomplishment, which allowed subsequent studies of the genetic relationship between different human populations. However, studies of the relationship between present-day humans and the extinct Neanderthals would require the sequencing of genomic DNA recovered from archaic specimens.

Early in his career, Svante Pääbo became fascinated by the possibility of utilizing modern genetic methods to study the DNA of Neanderthals. However, he soon realized the extreme technical challenges, because with time DNA becomes chemically modified and degrades into short fragments. After thousands of years, only trace amounts of DNA are left, and what remains is massively contaminated with DNA from bacteria and contemporary humans (Figure 1). As a postdoctoral student with Allan Wilson, a pioneer in the field of evolutionary biology, Pääbo started to develop methods to study DNA from Neanderthals, an endeavor that lasted several decades.

In 1990, Pääbo was recruited to University of Munich, where, as a newly appointed Professor, he continued his work on archaic DNA. He decided to analyze DNA from Neanderthal mitochondria—organelles in cells that contain their own DNA. The mitochondrial genome is small and contains only a fraction of the genetic information in the cell, but it is present in thousands of copies, increasing the chance of success. With his refined methods, Pääbo managed to sequence a region of mitochondrial DNA from a 40,000-year-old piece of bone. Thus, for the first time, we had access to a sequence from an extinct relative. Comparisons with contemporary humans and chimpanzees demonstrated that Neanderthals were genetically distinct.

As analyses of the small mitochondrial genome gave only limited information, Pääbo now took on the enormous challenge of sequencing the Neanderthal nuclear genome. At this time, he was offered the chance to establish a Max Planck Institute in Leipzig, Germany. At the new Institute, Pääbo and his team steadily improved the methods to isolate and analyze DNA from archaic bone remains. The research team exploited new technical developments, which made sequencing of DNA highly efficient. Pääbo also engaged several critical collaborators with expertise on population genetics and advanced sequence analyses. His efforts were successful. Pääbo accomplished the seemingly impossible and could publish the first Neanderthal genome sequence in 2010. Comparative analyses demonstrated that the most recent common ancestor of Neanderthals and Homo sapiens lived around 800,000 years ago.

Pääbo and his co-workers could now investigate the relationship between Neanderthals and modern-day humans from different parts of the world. Comparative analyses showed that DNA sequences from Neanderthals were more similar to sequences from contemporary humans originating from Europe or Asia than to contemporary humans originating from Africa. This means that Neanderthals and Homo sapiens interbred during their millennia of coexistence. In modern day humans with European or Asian descent, approximately 1-4% of the genome originates from the Neanderthals (Figure 2).

In 2008, a 40,000-year-old fragment from a finger bone was discovered in the Denisova cave in the southern part of Siberia. The bone contained exceptionally well-preserved DNA, which Pääbo’s team sequenced. The results caused a sensation: the DNA sequence was unique when compared to all known sequences from Neanderthals and present-day humans. Pääbo had discovered a previously unknown hominin, which was given the name Denisova. Comparisons with sequences from contemporary humans from different parts of the world showed that gene flow had also occurred between Denisova and Homo sapiens. This relationship was first seen in populations in Melanesia and other parts of South East Asia, where individuals carry up to 6% Denisova DNA.

Pääbo’s discoveries have generated new understanding of our evolutionary history. At the time when Homo sapiens migrated out of Africa, at least two extinct hominin populations inhabited Eurasia. Neanderthals lived in western Eurasia, whereas Denisovans populated the eastern parts of the continent. During the expansion of Homo sapiens outside Africa and their migration east, they not only encountered and interbred with Neanderthals, but also with Denisovans (Figure 3).

Paleogenomics and its relevance

Through his groundbreaking research, Svante Pääbo established an entirely new scientific discipline, paleogenomics. Following the initial discoveries, his group has completed analyses of several additional genome sequences from extinct hominins. Pääbo’s discoveries have established a unique resource, which is utilized extensively by the scientific community to better understand human evolution and migration. New powerful methods for sequence analysis indicate that archaic hominins may also have mixed with Homo sapiens in Africa. However, no genomes from extinct hominins in Africa have yet been sequenced due to accelerated degradation of archaic DNA in tropical climates.

Thanks to Svante Pääbo’s discoveries, we now understand that archaic gene sequences from our extinct relatives influence the physiology of present-day humans. One such example is the Denisovan version of the gene EPAS1, which confers an advantage for survival at high altitude and is common among present-day Tibetans. Other examples are Neanderthal genes that affect our immune response to different types of infections.

What makes us uniquely human?