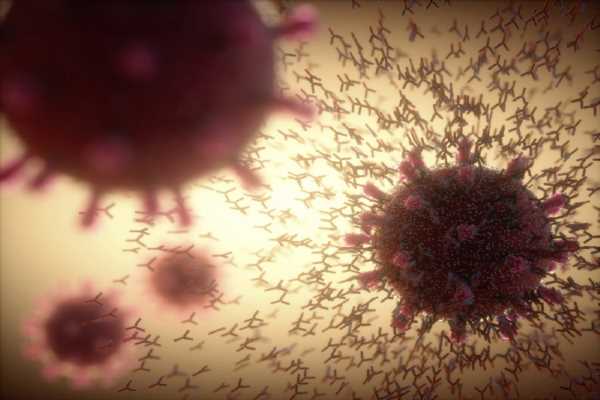 Such studies provide critical inputs about the spread and epidemiology of SARS-CoV-2. Nevertheless, false negatives might result due to antibody contraction and seroreversion, that is, the loss of antibodies.

In the current study, researchers quantified antibodies against SARS-CoV-2 nucleocapsid among healthcare workers (HCWs) in the United States (US). Nucleocapsid antibodies act as markers for prior SARS-CoV-2 infection even in the vaccinated population. Over 2300 Brigham and Women’s Hospital employees were included in a longitudinal cohort study between April 28 and September 30, 2020.

A generalized additive mixed-effects model (GAMM) was used to study antibody kinetics and a linear mixed-effects model (LMM) for estimating half-life. In the GAMM approach, the natural logarithm of antibody levels was modeled as a function of time since the index PCR-positive result; a constant exponential decline after the peak level was assumed in the LMM method.

125 (5.3%) participants were positive for antibodies against SARS-CoV-2 nucleocapsid between April 2020 and January 2021, when the wild-type virus was predominantly circulating. Of these, 110 (88%) subjects, who had one or more samples after the first seropositive sample, were included in the study. Most participants were females (86%) and White (88%); the median age was 33, with a median body mass index of 24 kg/mm2.

The GAMM model showed a more rapid antibody contraction up to one year after infection, followed by slower antibody contraction and seroreversion. Besides, the authors observed a non-significant step-wise trend of a slower relative decay in the concentration of antibodies among people of older age groups.

The authors revealed that seroreversion would be 19% after two years and 35% after four years, assuming a relatively constant antibody contraction after a rapid initial decay, as supported by prior studies on human coronaviruses and SARS-CoV-2. They suggested that seroreversion would affect the serologic investigations conducted a year after the widespread transmission of SARS-CoV-2.

Notably, the adult-only enrolment and overrepresentation of White participants and females in the cohort might limit the generalizability of these findings. Above all, accounting for seroreversion and global vaccine rollout would be helpful for the planning and interpretation of SARS-CoV-2 seroepidemiologic analyses.