Vapers who also smoke are twice as likely to suffer a stroke than adults who just stick to cigarettes, a study has warned.

Scientists analysed data on cigarette and e-cigarette use from 160,000 people in the US who were aged between 18 and 44.

Volunteers who both smoked cigarettes and vaped were much more likely to have a stroke, according to the research.

But the same results also revealed adults who only used e-cigarettes and had never smoked did not have an increased risk.

The findings suggest vaping is not a safe way of giving up tobacco, and could even harm the blood vessels, brain and heart.

The study comes amid an ‘outbreak’ of vaping-related illnesses in the US, with cases recorded in every state. Dozens of patients have died.

Experts warned more trials are needed into the safety of vaping, with evidence now mounting that the gadgets could be dangerous.

Smoking cigarettes alone is already known to be a key risk factor for stroke because the killer habit thickens the blood.

Research into how vaping may lead to a stroke is still in its infancy. However, several experiments have uncovered the same link. 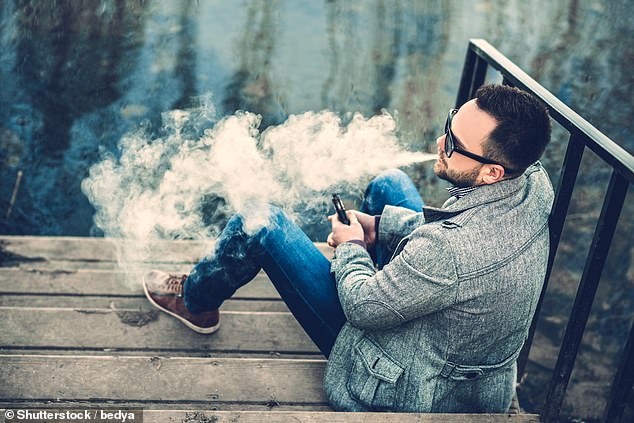 The research suggests that vaping may not be a safe way to stop smoking and when combined with cigarettes has an even worse effect on hearts, brains and blood vessels

E-cigarettes have the potential to benefit some people, by helping them quit smoking. But scientists still have a lot to learn about whether e-cigarettes are truly effective for quitting smoking and what the long-term risks are.

Nicotine is already known to be highly addictive and harm adolescent brain development, which continues into the early to mid-20s.

E-cigarettes produce an aerosol by heating a liquid that usually contains nicotine. Aerosol is inhaled into the lungs and can contain potentially harmful substances, including heavy metals like lead, volatile organic compounds, and cancer-causing agents.

US health officials, the Centers for Disease Control and Prevention (CDC), are investigating an outbreak of e-cigarette or vaping, product use associated lung injury (EVALI).

The mystery illness has swept across the states. Officials have identified Vitamin E acetate as a chemical of concern. THC is present in most of the fluid samples collected from the lungs of ill people, and most patients report a history of using THC-containing e-cigarette, or vaping, products.

‘Popcorn lung’ is the nickname for bronchiolitis obliterans, a condition which damages the smallest airways in the lungs and has been linked to people with vaping-related breathing problems. However, there’s no good evidence that e-cigarettes could cause the lung condition, according to Cancer Research UK.

The flavourings in electronic cigarettes may damage blood vessels in the same way as heart disease, according to research published in June 2018.

The chemicals used to give the vapour flavours, such as cinnamon, strawberry and banana, can cause inflammation in cells in the arteries, veins and heart.

They cause the body to react in a way that mimics the early signs of heart disease, heart attacks or strokes, the study by Boston University found.

Other recent studies have also suggested smoking e-cigarettes could cause DNA mutations which lead to cancer, and enable pneumonia-causing bacteria to stick to the lungs easier.

Researchers at New York University subjected human bladder and lung cells to e-cigarette vapor, which is marketed as being healthier than tobacco.

They found the cells mutated and became cancerous much faster than expected and mice exposed to the vapour also suffered significant DNA damage.

The vapour from e-cigarettes helps bacteria which cause the condition to stick to the cells that line the airways, they said.

The effect occurs with traditional cigarette smoke and those who are exposed to air pollution high in particulates from vehicle exhausts.

The research was led by George Mason University in Virginia and published in the American Journal of Preventive Medicine.

The study did not find that switching from cigarettes to e-cigarettes adjusted the risk of suffering a stroke.

‘Our study shows that young smokers who also use e-cigarettes put themselves at an even greater risk.

‘This is an important message for young smokers who perceive e-cigarettes as less harmful and consider them a safer alternative.

‘We have begun understanding the health impact of e-cigarettes and concomitant cigarette smoking, and it’s not good.’

Academics used data from the 2016-2017 Behaviour Risk Factor Surveillance System (BRFSS), a national health survey conducted jointly by the Centres for Disease Control and Prevention and all US states and territories.

They analysed responses on cigarette and e-cigarette use from 161,529 participants aged 18 to 44 years old.

The study calculated the odds of having a cerebrovascular event – such as a stroke – among the smokers.

The researchers accounted for frequency of use, high blood pressure, diabetes, cholesterol levels, BMI, physical activity, and alcohol use when calculating the odds of having a stroke.

But compared with current tobacco smokers, vapers had almost a 60 per cent lower risk of having a stroke.

Dr Lion Shahab, of University College London, warned that the results need to be interpreted with caution, adding that some of the volunteers may have taken up e-cigarettes because of a health scare that may have already caused them to be at a heightened risk of a stroke.

Smoking increases the risk of stroke because the chemicals in cigarettes thicken the blood, which can lead to blood clots or narrow arteries.

Previous research in mice has shown breathing in vape – which also is full of chemicals – increases the risk of clot formation.

And studies on blood cells have shown the flavourings in e-cigarettes cause cell damage, which may cause arteries to harden and lead to clots.

The latest study comes as health officials in the US investigate a spate of vaping related illnesses across the states.

At least 55 Americans have died from vaping-related illness, which have sent more than 2,500 people to the hospital, figures show.

US officials believe the vitamin E acetate, a diluting agent used in many THC vaping products, is the ’cause’ of the majority of cases.

Public Health England says that vaping is 95 per cent safer than smoking cigarettes. Vaping products are tightly regulated in the UK.

Some 3.6million people in the UK vape, according to figures from the charity Action on Smoking and Health.

Smoking rates are currently at a record low in England, with fewer than 15 per cent of the population regularly lighting up.

What is an e-cigarette and how is it different to smoking tobacco?

An electronic cigarette (e-cigarette) is a device that allows users to inhale nicotine by heating a vapour from a solution that contain nicotine, propylene and flavourings.

But while they have been branded as carrying a lower risk than cigarettes, an increasing swell of studies is showing health dangers.

E-cigarettes do not produce tar or carbon monoxide, but the vapor does contain some harmful chemicals.

Nicotine is the highly addictive chemical which makes it difficult for smokers to quit.

Very similar to normal e-cigarettes but with sleeker design and a higher concentration of nicotine.

Thanks to its ‘nicotine salts’, manufacturers claim one pod delivers the amount of nicotine as a pack of cigarettes.

It is composed of an e-cigarette (battery and temperature control), and a pod of e-liquid which is inserted at the end.

It is known as a ‘heat not burn’ smokeless device, heating tobacco but not burning it (at 350C compared to 600C as normal cigarettes do).

The company claims this method lowers users’ exposure to carcinogen from burning tobacco.