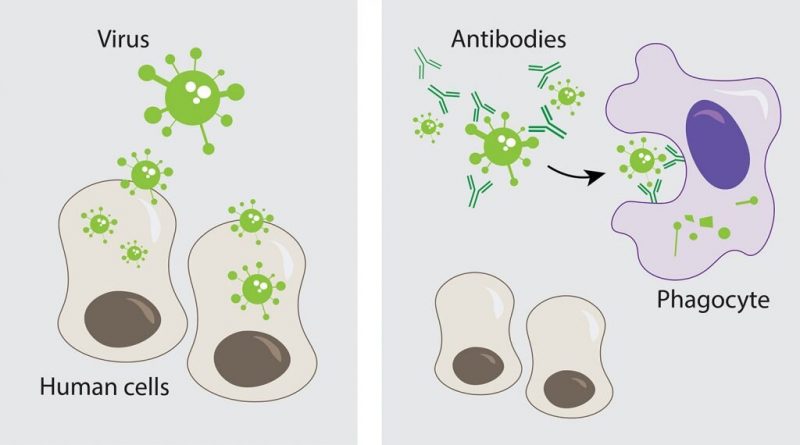 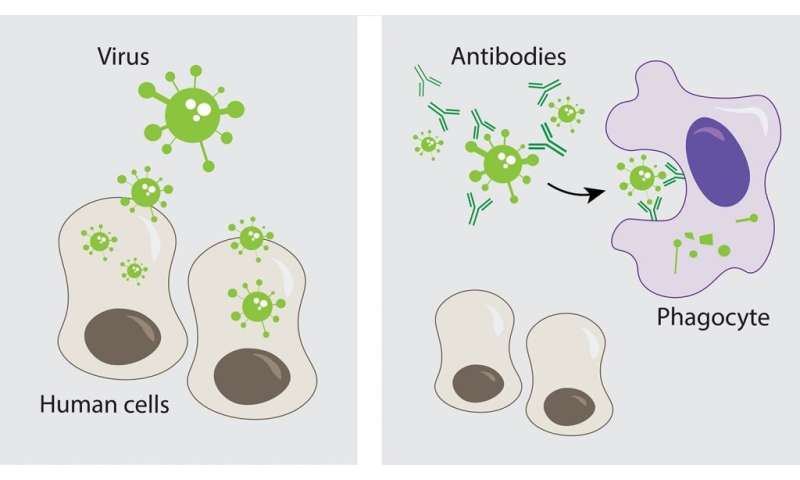 With millions of COVID-19 cases reported across the globe, people are turning to antibody tests to find out whether they have been exposed to the coronavirus that causes the disease. But what are antibodies? Why are they important? If we have them, are we immune to COVID-19? And if not, why not?

These are important questions. Antibody tests can detect the presence of antibodies in the blood that bind to the coronavirus that causes COVID-19. You may have heard news reports explaining that antibody tests are key to slowing the infection rate. You may also have heard medical experts warn that having the antibodies may not guarantee immunity against a second COVID-19 infection. To help you get a handle on what these health experts are talking about, we spoke to Jonathan Fogle, associate professor of microbiology and immunology in the CVM at NC State.

The Abstract: What are antibodies, and how do we make them?

Jonathan Fogle: Antibodies, also known as immunoglobulins (Ig), are specialized proteins that bind to a uniquely shaped object—called an antigen—that is found on the surface of a pathogen. These pathogens can be things such as bacteria or viruses. Antibodies are produced by B lymphocytes, known as B cells, which are specialized white blood cells of the immune system. B cells have antibodies on their cell surface that allow them to recognize anything foreign. When they encounter a pathogen, the B cells transform into plasma cells, which start producing antibodies that are designed to bind to an antigen that is specific to this pathogen.

TA: How do antibodies stop an infection?

Fogle: Plasma cells release large amounts of antibody into the body’s circulation. This protects us in two main ways. First, antibodies can bind to antigens on the outside of the pathogen to stop it from entering our cells. This is particularly important for viruses, which enter human cells to replicate (so if the virus is stopped from entering your cells, you won’t get sick). Second, by binding to antigens on the pathogen, antibodies also signal other white blood cells known as phagocytic cells, which engulf and destroy the pathogen. So, in short, antibodies can both neutralize a virus and mark it for destruction.

TA: Why do we produce antibodies?

Fogle: Antibodies form part of our adaptive immune response, which is a refined, targeted response to a specific antigen. The first time we encounter a virus, some of our B cells become plasma cells, but others transform into memory B cells. The second time you’re exposed to the same pathogen, these memory cells quickly transform into plasma cells that produce large amounts of antigen-specific antibodies to fight the infection.

TA: If we have antibodies, does this mean we will always be protected?

Fogle: This novel coronavirus is new to the human population—we have never been exposed to it before—so there are many unknowns about how we respond to it. Across any population, there is a high degree of individual variability in our antibody responses to a pathogen in the amount, type and quality of antibodies that we make.

Some people make many high quality antibodies that are very good at recognizing the relevant antigen and binding to it. If this happens, the virus is rapidly bound by antibodies and eliminated before it can even cause an infection.

Other people make antibodies, but they’re not as effective at binding the pathogen. In this situation, the antibodies only provide partial protection: they slow the virus down but the virus can still cause some degree of infection. These individuals usually exhibit some symptoms and shed the virus for a longer period of time.

There are also some people who either produce very little or very poor quality antibodies. In this case, although these people produce antibodies, the immunity is not very effective so they can experience prolonged infection with more severe symptoms. They are also likely to be re-infected at a later point in time. This is one of the big unknowns with this new coronavirus: What percentage of the population falls into this category?

TA: Do antibodies always form after an infection?

Fogle: We generally expect antibodies to form following infection, but there are certain cases where this might not occur.

The adaptive immune system involves more than just B cells, plasma cells and antibodies—it also includes T cells. T cells are another population of white blood cells that can develop into memory cells, just as B cells can. They can also differentiate into specialized cells that kill virus-infected cells. The functions of T cells and B cells are different. B cells develop into plasma cells that produce antibodies (T cells do not); T cells directly kill virus-infected cells (B cells do not). Sometimes individuals with a very vigorous T cell immune response will be protected from a pathogen even though they produce low amounts of antibody. The T cell immune response is much more difficult to measure than the antibody response and is usually only evaluated in specialized research settings. 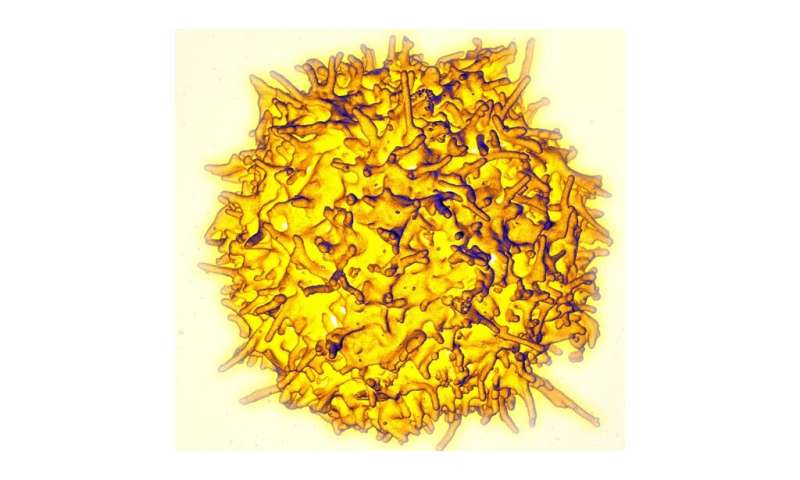 TA: Why do we need an adaptive immune response?

Fogle: Our adaptive immune response is important because once developed, it is highly specific for the pathogen and provides us with immunologic memory. This serves two purposes.

First, it helps build herd immunity. If enough people in a population have immunologic memory, the second wave of infection typically occurs in smaller clusters instead of spreading like wildfire and overwhelming the population (and thus our hospitals). This is why social distancing is so important right now—it’s limiting the spread of disease and helping to ensure that our hospitals are not overwhelmed.

Secondly, our adaptive immune system protects us as we age. Our immunologic memory can last for a very long time. People in their 80s or 90s still maintain immunologic memory to pathogens and vaccines that they were exposed to as children, such as influenza or the measles vaccine.

Our capacity to generate immunologic memory is greatest from childhood into late adolescence because the bone marrow, where B cells mature, and the thymus, where T cells mature, are most efficient and productive at younger ages. As we advance into adulthood, these production systems decline and we gradually lose our ability to generate a vigorous adaptive immune response to new pathogens, particularly in later stages of life.

This is what we’re really worried about with this COVID-19 virus. In general, our elderly population has effective immunologic memory to things that they were exposed to when they were younger, but because this is a new virus, elderly people might have a difficult time generating an adaptive antiviral immune response. This is often compounded by other underlying diseases that weaken the adaptive immune responses.

TA: Does this mean we can’t generate new antibodies against new infections when we’re older?

Fogle: Not exactly. As we get older, the immune response isn’t absent, it’s just diminished. By the time you’re in your 80s or 90s, you’re less efficient at generating immunity to newly encountered pathogens than during childhood or as a young adult. The adaptive immune response also exhibits a high degree of variability between individuals. Some people in their 80s and 90s still have an excellent adaptive immune response to new things, but many do not.

TA: Is this related to why some coexisting conditions worsen the effects of an infection?

Fogle: We know that, in general, chronic diseases tend to suppress our immune systems because different parts of our body are not functioning efficiently and together. The immune system is a complex network of lymph nodes, the spleen, bone marrow and other organs. The system needs a proper functioning environment to generate an effective response. This is why people with underlying chronic disease often have some loss of innate and adaptive immunity and therefore are at greater risk for developing a more severe infection.

TA: Not all antibodies last forever. Why does immunologic memory sometimes fade?

Fogle: We still don’t know how, why and for how long immunologic memory lasts for every infectious disease. Immunologic memory is probably one of the most complicated things we study in immunology. What we do know for most pathogens and vaccines is that, especially from childhood to adolescence, if we are exposed to something multiple times, we generate robust and long-term immunity.

But as we age, although we may develop some adaptive immunity, the memory doesn’t seem to last as long. This probably has to do with the age at which we’re exposed to the pathogen and how good the pathogen is at inducing immunity. It is also linked to how many times we are exposed to or vaccinated against a pathogen. We generally generate our maximal number of memory cells with three to five exposures, meaning that being exposed more than three to five times will not further increase the overall number of memory cells.

TA: Why is it important to understand more about COVID-19 antibodies?