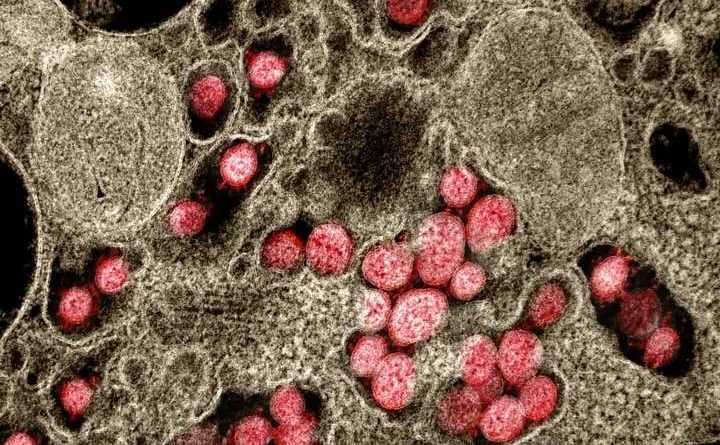 The COVID-19-causing coronavirus, voltaren gs SARS-CoV-2, likely first spread to humans from animals in two separate transmission events in a Wuhan market in late November 2019, according to a pair of analyses by international teams co-led by Scripps Research scientists.

The analyses, published July 26, 2022 in Science and released in earlier, pre-print versions in February, were based mainly on the locations of cases and environmental samples, as well as genomic sequences of SARS-CoV-2 isolates, from the first weeks of the pandemic in China.

“Upstream events are still obscure, but our analyses of available evidence clearly suggest that the pandemic arose from initial human infections from animals for sale at the Huanan Seafood Wholesale Market in late November 2019,” says Kristian Andersen, Ph.D., who was a co-senior author of both studies and is a professor in the Department of Immunology and Microbiology at Scripps Research.

In the first analysis, co-senior authored by Michael Worobey, DPhil, of the University of Arizona, the researchers examined the geographic pattern of COVID-19 cases in the first month of the outbreak, December 2019.

“In a city covering more than 3,000 square miles, the area with the highest probability of containing the home of someone who had one of the earliest COVID-19 cases in the world was an area of a few city blocks, with the Huanan market smack dab inside it,” says Worobey.

They were able to determine the locations of 155 of the 174 COVID-19 cases identified by the World Health Organization for that month. Their statistical analysis showed that these cases clustered tightly around the Huanan Market, whereas later cases were dispersed widely throughout Wuhan—a sprawling megacity of 11 million people. One striking finding was that early COVID-19 patients with no history of having recently visited the market resided significantly closer to it, on average, than patients who had visited the market, showing the close association between early cases and the market.

The researchers also determined that mammals now known to be infectible by SARS-CoV-2, including red foxes, hog badgers and raccoon dogs, were sold live at the Huanan market in the weeks preceding the first recorded COVID-19 cases. The scientists developed a detailed map of the market, and showed that SARS-CoV-2-positive samples reported by Chinese researchers in early 2020 showed a clear association with the western portion of the market, where live or freshly butchered animals were sold in late 2019.

“There has been broad agreement that the Huanan market was a place where early spread of the virus was amplified, but what our data show is that the market was also the early epicenter and very likely the place of emergence,” says co-author Joshua Levy, Ph.D., a postdoctoral researcher in the Andersen lab.

The second study, an analysis of SARS-CoV-2 genomic data from early cases, was co-led by Andersen and Worobey, along with Jonathan Pekar and Joel Wertheim, Ph.D., of UC San Diego, and Marc Suchard, MD, Ph.D., of UCLA.

Here the researchers combined epidemic modeling with analyses of the virus’s early evolution based on the earliest sampled genomes. They determined that the pandemic, which initially involved two subtly distinct lineages of SARS-CoV-2, likely arose from at least two separate infections of humans from animals at the Huanan market in late November 2019. The analyses also suggested that, in this period, there were many other animal-to-human transmissions at the market that nevertheless failed to manifest in recorded COVID-19 cases.

According to the authors, the two studies collectively show that SARS-CoV-2, like SARS-CoV-1 before it, originated via jumps from animals to humans—in this case from animals being sold at a specific market in Wuhan, likely following transmission to those animals from coronavirus-carrying bats in the wild or on farms in China.