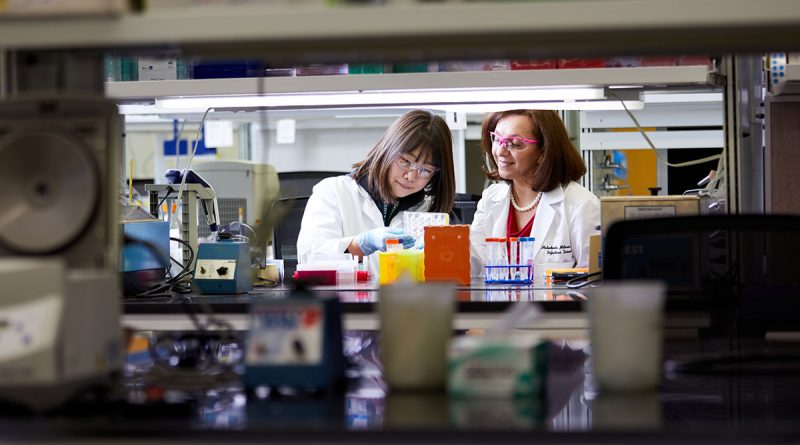 Researchers at Washington University School of Medicine in St. Louis have received two grants from the National Institutes of Health (NIH) totaling more than $5 million to study two types of parasitic worm infection that cause devastating illness in millions of people worldwide.

The two infections are on the World Health Organization’s (WHO) list of neglected tropical diseases, a group of about 20 illnesses that together affect more than 1 billion people. One project will focus on onchocerciasis, commonly known as river blindness, caused by a parasitic roundworm spread by black flies that live and reproduce near rivers. The second project will target fascioliasis, caused by a foodborne parasitic flatworm commonly found in cattle-farming operations.

Led by Makedonka Mitreva, PhD, a professor of medicine and of genetics, both projects involve large-scale genome sequencing of the parasites to develop genetic tools to help monitor the infections’ spread and track resistance these parasites already have developed against drugs intended to eradicate them. The genomic information also could lead to new therapies to combat the drug-resistant strains.

“These parasites are becoming very good at evading the drugs that target them, and we have no idea how they are doing that,” said Mitreva, also a research member of the McDonnell Genome Institute at Washington University School of Medicine. “We need a better understanding of these parasites’ genomes so we can discover how they resist standard drugs. That knowledge then could result in identification of genetic markers that predict whether a drug will fail to effectively treat infected individuals, thus guiding the design of new treatments.”

In collaboration with Miguel Cabada, MD, of the University of Texas in Galveston, Mitreva is studying fascioliasis in the highlands of Peru, where farmers and their families are often in close contact with infected livestock. Cabada, who also runs a clinic in Cusco, Peru, treats adults and children with fascioliasis infection, caused by the flatworm Fasciola hepatica. A drug called triclabendazole is the first-line treatment for fascioliasis, but resistance to the treatment is widespread in livestock and a growing problem among people who become infected.

“This parasite burrows through the intestinal wall and makes its way to the liver and bile ducts,” Mitreva said. “It causes substantial liver damage. This sets up a long-term, chronic infection that can really have an impact on nutritional status, leading to anemia and weight loss.”

Children are especially vulnerable to fascioliasis infections, which can contribute to malnutrition and lifelong consequences, including stunted growth, dysfunctional brain development and impaired immune systems. In the Andes Mountains of Peru and Bolivia, an estimated 70% of children are infected.

The researchers will sequence the genomes of fascioliasis parasites that are sensitive and resistant to triclabendazole in an effort to identify genetic reasons for the resistance and to develop a quick test to distinguish between drug-susceptible and drug-resistant worms.

In collaboration with Warwick Grant, PhD, of La Trobe University in Melbourne, Australia, Mitreva is studying river blindness in parts of sub-Saharan Africa. River blindness is caused by the parasitic roundworm Onchocerca volvulus, which is spread by black flies.

“This roundworm can make its way to the eye and cause permanent blindness in some people,” Mitreva said. “The parasites migrate through the skin, causing nodules and extreme itching. Not all strains of the worm cause blindness — that can depend on the geographic area that the worm comes from.”

The drug ivermectin has been used to treat and prevent river blindness for decades. It is often given to entire communities as part of mass drug-administration programs to prevent the disease in areas where the parasite has a long history of being endemic.

“We need better diagnostic tools to understand which strains don’t respond well to ivermectin, identify where those strains are and develop maps of infection patterns,” Mitreva said. “We would like to develop ways to predict areas where the parasites are most likely to recur and, in contrast, areas where the disease is likely to be well controlled and public health officials can safely stop the long-running, mass drug-administration programs.”

Being able to stop giving these drugs to entire communities may lift some of the evolutionary pressure that drives the development of drug resistance, according to the researchers. The tools they aim to develop will be suitable for genetic epidemiology. For example, should the parasite return after mass drug administration, such tools would allow the researchers to trace the likely source of the recurrence.

“While these two parasites are very different in how they are spread and in the specific damage they cause, the human populations they affect overlap considerably,” Mitreva said. “We hope our projects can help understand these parasites better, so we can make meaningful contributions to reducing the devastating burden they place on so many people in developing countries worldwide.”