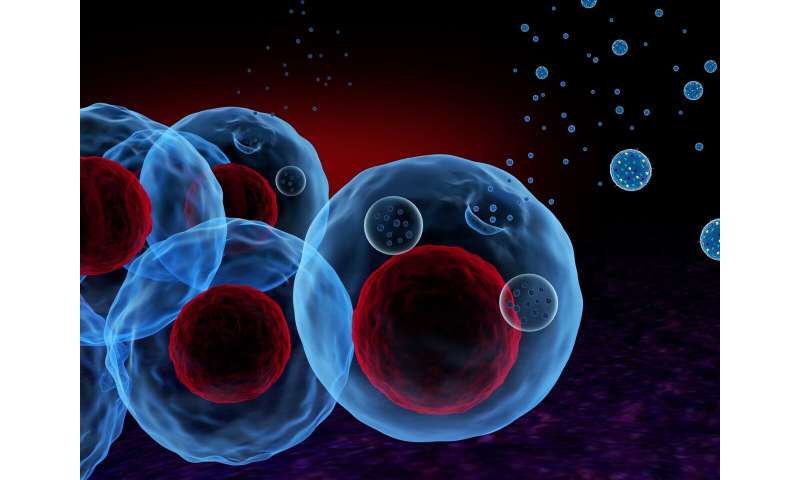 Scientists have developed a new gene-therapy technique by transforming human cells into mass producers of tiny nano-sized particles full of genetic material that has the potential to reverse disease processes.

Though the research was intended as a proof of concept, the experimental therapy slowed tumor growth and prolonged survival in mice with gliomas, which constitute about 80 percent of malignant brain tumors in humans.

The technique takes advantage of exosomes, fluid-filled sacs that cells release as a way to communicate with other cells.

While exosomes are gaining ground as biologically friendly carriers of therapeutic materials—because there are a lot of them and they don’t prompt an immune response—the trick with gene therapy is finding a way to fit those comparatively large genetic instructions inside their tiny bodies on a scale that will have a therapeutic effect.

This new method relies on patented technology that prompts donated human cells such as adult stem cells to spit out millions of exosomes that, after being collected and purified, function as nanocarriers containing a drug. When they are injected into the bloodstream, they know exactly where in the body to find their target—even if it’s in the brain.

“Think of them like Christmas gifts: The gift is inside a wrapped container that is postage paid and ready to go,” said senior study author L. James Lee, professor emeritus of chemical and biomolecular engineering at The Ohio State University.

And they are gifts that keep on giving, Lee noted: “This is a Mother Nature-induced therapeutic nanoparticle.”

The study is published today in the journal Nature Biomedical Engineering.

In 2017, Lee and colleagues made waves with news of a regenerative medicine discovery called tissue nanotransfection (TNT). The technique uses a nanotechnology-based chip to deliver biological cargo directly into skin, an action that converts adult cells into any cell type of interest for treatment within a patient’s own body.

By looking further into the mechanism behind TNT’s success, scientists in Lee’s lab discovered that exosomes were the secret to delivering regenerative goods to tissue far below the skin’s surface.

The technology was adapted in this study into a technique first author Zhaogang Yang, a former Ohio State postdoctoral researcher now at the University of Texas Southwestern Medical Center, termed cellular nanoporation.

The scientists placed about 1 million donated cells (such as mesenchymal cells collected from human fat) on a nano-engineered silicon wafer and used an electrical stimulus to inject synthetic DNA into the donor cells. As a result of this DNA force-feeding, as Lee described it, the cells need to eject unwanted material as part of DNA transcribed messenger RNA and repair holes that have been poked in their membranes.

“They kill two birds with one stone: They fix the leakage to the cell membrane and dump the garbage out,” Lee said. “The garbage bag they throw out is the exosome. What’s expelled from the cell is our drug.”

The electrical stimulation had a bonus effect of a thousand-fold increase of therapeutic genes in a large number of exosomes released by the cells, a sign that the technology is scalable to produce enough nanoparticles for use in humans.

Essential to any gene therapy, of course, is knowing what genes need to be delivered to fix a medical problem. For this work, the researchers chose to test the results on glioma brain tumors by delivering a gene called PTEN, a cancer-suppressor gene. Mutations of PTEN that turn off that suppression role can allow cancer cells to grow unchecked.

For Lee, founder of Ohio State’s Center for Affordable Nanoengineering of Polymeric Biomedical Devices, producing the gene is the easy part. The synthetic DNA force-fed to donor cells is copied into a new molecule consisting of messenger RNA, which contains the instructions needed to produce a specific protein. Each exosome bubble containing messenger RNA is transformed into a nanoparticle ready for transport, with no blood-brain barrier to worry about.

“The advantage of this is there is no toxicity, nothing to provoke an immune response,” said Lee, also a member of Ohio State’s Comprehensive Cancer Center. “Exosomes go almost everywhere in the body, including passing the blood-brain barrier. Most drugs can’t go to the brain.

“We don’t want the exosomes to go to the wrong place. They’re programmed not only to kill cancer cells, but to know where to go to find the cancer cells. You don’t want to kill the good guys.”

The testing in mice showed the labeled exosomes were far more likely to travel to the brain tumors and slow their growth compared to substances used as controls.

Because of exosomes’ safe access to the brain, Lee said, this drug-delivery system has promise for future applications in neurological diseases such as Alzheimer’s and Parkinson’s disease.