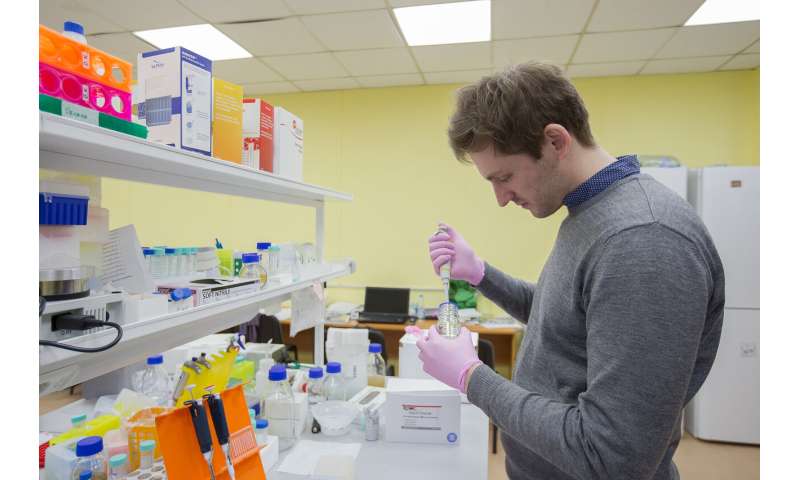 A team of scientists from Peter the Great St.Petersburg Polytechnic University (SPbPU) together with their colleagues developed a method of targeted drug delivery to cancer cells. The discovery is based on the use of mesenchymal stem cells and microcapsules made of polymeric compounds. The results were published in the Biomaterials Science journal. In the future the discovery may allow for more precise treatment of tumors without causing damage to healthy tissues.

Different types of tissues, including fat, muscle, cartilage, and bone, originate from mesenchymal stem cells (MSC). Moreover, these cells can migrate to tumors and react with them. The reason for this is chemokines—protein-like substances that are actively released by neoplasms. Chemokines attract the cells that have specific receptors on their surface, and the migration of such cells is aligned with the growth of chemokine concentration. The CXCR4 receptor on the surface of MSC reacts with the SDF-1 chemokine and makes the cells move closer to the tumor.

“The development of drug delivery systems based on living cells is a burning issue in biomed. This strategy provides for the use of cell cultures that are able to react with tumors. MSCs are considered one of the most promising among potential drug delivery platforms because they are relatively easy to obtain and grow in a lab,” explained Timofey Karpov, a co-developer of the method, an associate at the Laboratory for Microencapsulation and Controlled Delivery of Biologically Active Compounds, RASA-SPbPU Center.

The new technology allows one to pack together different biologically active substances, including anti-cancer drugs. The team selected vincristine as a sample drug because it affects different types of growths and is actively used in chemotherapy. Vincristine was put inside special microcapsules made of polymeric compounds and gold nanorods. By means of phagocytosis the capsules got into the MSCs, and after that the cells were treated with infrared light that penetrates the tissues deeply without damaging them. As a result, gold particles in the capsules absorbed large amounts of energy and heated up. The heat destroyed the polymeric structures, and the drug was released into MSCs. Some vincristine remained inside, but some also entered the intercellular space and affected the tumor.

“The new technology for the synthesis of sub- and micron-sized polymeric capsules provides for the packaging of different biologically active substances. Based on it, platforms for the delivery of a wide range of antitumor substances can be developed, and drugs for different areas of modern medicine can be created. Infrared light has been widely used for a long time and is almost harmless when the irradiation parameters are set up correctly,” said Timofey Karpov.