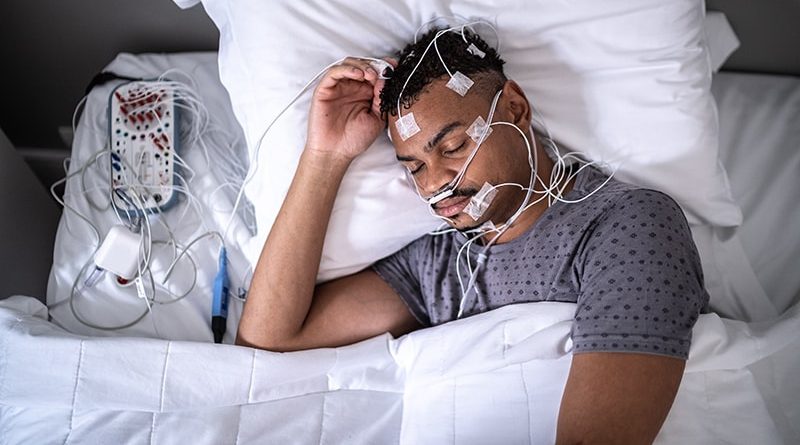 CHARLOTTE, N.C. – Overnight sleep electroencephalography (EEG) contains an abundance of brain wave data that could be mined to identify an individual’s risk for a host of health outcomes, including dementia, cognitive impairment, and cardiovascular events, a researcher reported at the annual meeting of the Associated Professional Sleep Societies. “Sleep EEGs contain decodable information about the risk of unfavorable outcomes,” said Haoqi Sun, PhD, an instructor of neurology at Massachusetts General Hospital, Boston, and lead study author. “The results suggest that it’s feasible to use sleep to identify people with high risk of unfavorable outcomes and it strengthens the concept of sleep as a window into brain and general health.”

Then, Sun explained, they extracted 86 spectral and time-domain features of REM and non-REM sleep from sleep EEG recordings, and analyzed that data by adjusting for eight covariates including age, sex, body mass index, and use of benzodiazepines, antidepressants, sedatives, antiseizure drugs, and stimulants.

Participants were partitioned into three sleep-quality groups: poor, average, and good. The outcome-wise mean prediction difference in 10-year cumulative incidence was 2.3% for the poor sleep group, 0.5% for the average sleep group, and 1.3% for the good sleep group.

Ready for the Clinic?

In an interview, Sun said the results demonstrated the potential of using EEG brain wave data to predict health outcomes on an individual basis, although he acknowledged that most of the 86 sleep features the researchers used are not readily available in the clinic.

He noted the spectral features used in the study can be captured through software compatible with PSG. “From there you can identify the various bands, the different frequency ranges, and then you can easily see within this range whether a person has a higher power or lower power,” he said. However, the spindle and slow-oscillation features that researchers used in the study are beyond the reach of most clinics.

This research is in its early stage, Sun said, but at some point the data collected from sleep studies could be paired with machine learning to make the model workable for evaluating individual patients. “Our goal is to first make this individualized,” he said. “We want to minimize the noise in the recording and minimize the night-to-night variability in the findings. There is some clinical-informed approach and there is also some algorithm-informed approach where you can minimize the variation over time.”

The model also has the potential to predict outcomes, particularly with chronic diseases such as diabetes and dementia, well before a diagnosis is made, he said.

Donald Bliwise, PhD, professor of neurology at Emory Sleep Center in Atlanta, said the study was “fascinating; it’s provocative; it’s exciting and interesting,” but added, “Sleep is vital for health. That’s abundantly clear in a study like that, but trying to push it a little bit further with all of these 86 measurements of the EEG, I think it becomes complicated.”

The study methodology, particularly the use of cumulative incidence of various diseases, was laudable, he said, and the use of simpler EEG-measured sleep features, such as alpha band power, “make intuitive sense.”

But it’s less clear on how the more sophisticated features the study model used – for example, kurtosis of theta frequency or coupling between spindle and slow oscillation – rank on sleep quality, he said, adding that the researchers have most likely done that but couldn’t add that into the format of the presentation.

“Kurtosis of the theta frequency band we don’t get on everyone in the sleep lab,” Bliwise said. “We might be able to, but I don’t know how to quite plug that into a turnkey model.”

The clinical components of the study were conducted by M. Brandon Westover, MD, PhD, at Massachusetts General Hospital, and Robert J. Thomas, MD, at Beth Israel Deaconess Medical Center, both in Boston. The study received support from the American Academy of Sleep Medicine Foundation. Sun has no relevant disclosures. Bliwise has no disclosures.