Stress DOES cause you to go grey: Cells that control hair colour become permanently damaged by ‘fight-or-flight’ hormone, scientists find

It was long thought to be an old wives’ tale.

But stress really does make your hair go grey – and once it’s changed colour it won’t ever go back, scientists say.

A Harvard University study on mice found the culprit was norepinephrine, a hormone released when the body goes into ‘fight-or-flight’ mode.

Under immense stress, norepinephrine is released into the bloodstream where it ramps up heart rate and prepares the body to react to a threat.

But it appears to damage melanocyte stem cells (MSCs), pigment-producing skin cells that give hair its colour. 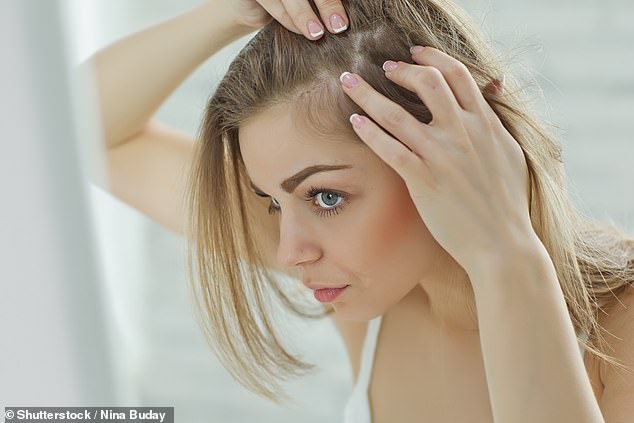 People typically start to go grey in their 30s, and have half a head of grey hair by the time they are 50.

Premature greying, as early as teenage years, is believed to be caused largely by genetics.

But whether or not stress can cause hair to change colour has been fiercely debated by scientists for years.

Stem cells are a basic type of cell that can change into another type of more specialised cell through a process known as differentiation.

Think of stem cells as a fresh ball of clay that can be shaped and morphed into any cell in the body – including bone, muscle, skin and more.

This ability means they have been the focus of lots of medical research in recent decades.

They grow in embryos as embryonic stem cells, helping the rapidly growing infant form the millions of different cell types it needs to build before birth.

In adults they are used as repair cells, replacing those we lose through damage or ageing.

Most cells are specialised to perform particular functions, such as red blood cells that carry oxygen around our bodies in the blood, but they are unable to divide.

Stem cells provide new cells for the body as it grows, and replace specialised cells that are lost through ageing or damage.

They have two unique properties that enable them to do this.

They can divide repeatedly to make new cells, and as they divide, they can change into the other types of cells needed in the body.

The senior author of the latest study, published in Nature, said most people have an anecdote of how stress caused a reaction in their body.

‘Particularly in their skin and hair – the only tissues we can see from the outside,’ Dr Ya-Chieh Hsu, professor of stem cell and regenerative biology at Harvard, said.

‘We wanted to understand if this connection is true, and if so, how stress leads to changes in diverse tissues.’

It’s previously been shown that hormones produced in response to stress can deplete the stem cells that colour hair.

But the researchers wanted to determine which hormones they are – and where they come from.

Harvard scientists honed in on the sympathetic nerve system, which is partially responsible for the body’s fight-or-flight response.

It directs the body how to respond to stressful or dangerous situations, boosting heart rate and sending blood to the muscles, for example.

Sympathetic nerves branch out into skin cells – including hair follicles – to collect information on the environment.

A side effect of the response is that changing the levels of hormones may warp the function of cells.

The researchers found that stress causes sympathetic nerves to release the chemical norepinephrine into the blood.

Norepinephrine, a neurotransmitter produced by the brain in both minor and chronic stress situations, makes the body more alert and ready to fight stress.

But it also causes the stem cells in hair follicles to activate excessively, the study found.

The stem cells go through a process called proliferation and differentiation, where they switch into specialized cells.

In other words, their role changes and they move away to other parts of the body, leaving the hair follicles depleted.

Mice exposed to physical or psychological stress showed a reduction in numbers of melanocyte stem cells within days. They hair greyed at a faster rate.

Within 24 hours of being injected with norephinephrine, the mice had lost about 50 per cent of their stem cells to proliferation.

When the scientists blocked proliferation of stem cells, it prevented the loss of melanocyte stem cells and hair greying in the mice.

Dr Hsu said: ‘When we started to study this, I expected that stress was bad for the body. But the detrimental impact of stress that we discovered was beyond what I imagined.

‘After just a few days, all of the pigment-regenerating stem cells were lost. Once they’re gone, you can’t regenerate pigment anymore. The damage is permanent.’

The study shows greying is driven by activation of the sympathetic nervous system, contrary to previous theories.

It has long been thought that stress may cause the immune system to attack stem cells which pigment hair and skin.

Or, that the hormone cortisol, known as the ‘stress hormone’ was the primary culprit. However, the researchers at Harvard disproved both these theories in their own experiments.

Dr Hsu said: ‘Stress always elevates levels of the hormone cortisol in the body, so we thought that cortisol might play a role.

‘But surprisingly, when we removed the adrenal gland from the mice so that they couldn’t produce cortisol-like hormones, their hair still turned grey under stress.’