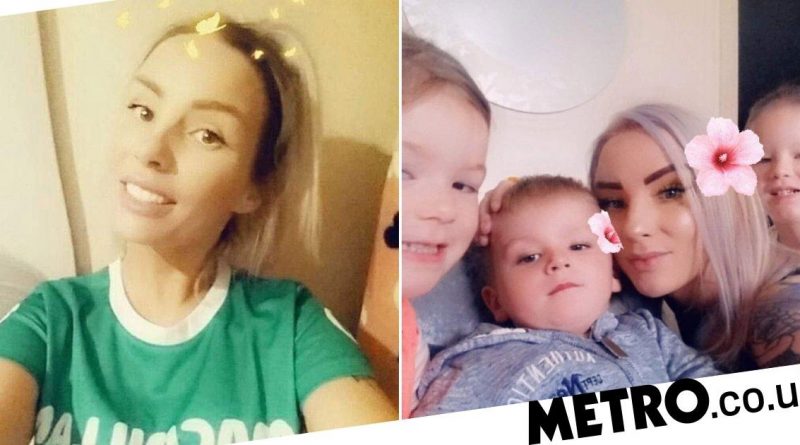 Kim Montgomery had her first smear test 10 years ago but she says that the experience wasn’t very pleasant and she avoided them for a decade.

The young mum-of-four wants to warn others about ignoring reminder letters and she is urging people to attend screenings, even if they find it embarrassing.

Kim said medics fear she will need a hysterectomy and chemo, but she won’t know if the grade two cancer has spread until the results of an MRI come back.

One of the reasons she waited so long was that she was pregnant with three children in four years and doctors advise you should wait until 12 weeks after having a baby to have a test.

In the years between having her children Macaulay, three, Kayla, five, Lacey, six, and Dylan, 11, she ignored letters, thinking it would be fine.

But after experiencing abnormal bleeding for nine months, Kim finally decided she should have a smear test and said she ‘had a feeling’ she had cancer.

Kim, from Dunfermline, Fife, said: ‘I had the smear test on December 20 and then in the new year, I got a letter to say I had abnormal cells.

‘I thought right away it was cancer, I just had a feeling, but it wasn’t real until the doctors told me and I broke down.

‘You automatically think you are going to die.

‘I had been pregnant with my children back to back and you can’t have a smear test when you are pregnant.

‘That was a huge factor in why I didn’t get one for so long, but I also just didn’t realise how important it was.

‘I got lots of reminders about going but I just ignored them.

Signs and symptoms of cervical cancer

The most common symptoms of cervical cancer include:

‘When I had my first one 10 years ago I remember it wasn’t nice so I wasn’t in a hurry to go back.’

Kim is worried about having to tell her children she is dying if doctors give her a terminal diagnosis.

She said: ‘The doctors won’t be able to tell me how long I have had it, but if I had just gone for a test they would have caught it before it turned into cancer.

‘I didn’t want to tell my children until I found out if it’s terminal.

‘They know I am not well, and I have told my eldest who said right away ‘”are you going to die?”.’

‘It’s really daunting and I wanted to have more children, but I just feel lucky I have my four.’

When the bleeding started nine months ago, she still put off going to the doctor but eventually realised she needed to speak to someone.

She added: ‘I am still bleeding now.

‘I was worried about it but I just kept putting it off until I thought enough is enough I have to go and get it done.’

Kim and her partner, Dane Paten, 30, are now trying to raise money for alternative treatment.

Kim said: ‘I have been quoted £1,745 for CBD oil so we are trying to raise money for that.

‘Since I announced I have cancer on Facebook, 19 women have said it’s encouraged them to go and have their smear test done.

‘I want to raise awareness of how important it is for people to have their smear test.

‘I hope me sharing my story means more lives can be saved.’