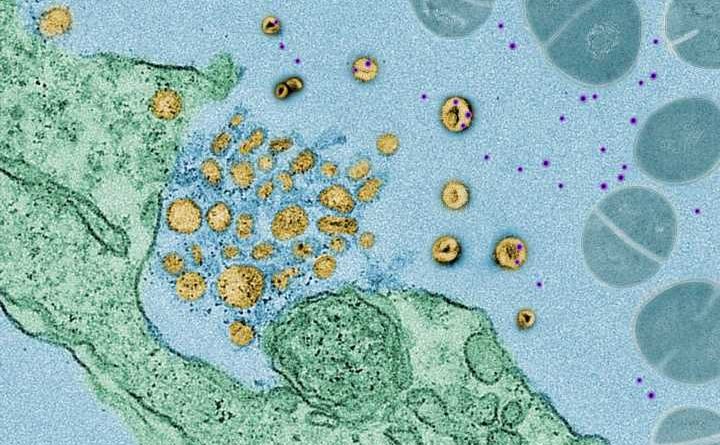 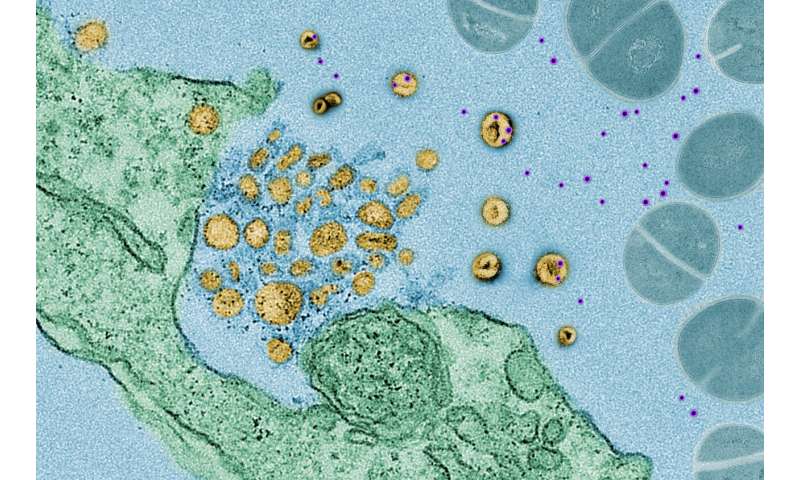 A “decoy” mechanism has been found in human and animal cells to protect them from potentially dangerous toxins released by foreign invaders, such as bacteria.

Scientists at NYU Grossman School of Medicine have found that cells exposed to bacteria release tiny, protein-coated packages called exosomes, which act like decoys to bind to bacterial toxins, including those produced by MRSA (methicillin-resistant Staphylococcus aureus), a bacterium that has become resistant to many antibiotics, or Corynebacterium diphtheriae (the bacterium responsible for highly contagious diphtheria).

Researchers say this “soaking up” of toxins neutralizes their action and helps keep cells safe. If left to move around freely, the toxins would normally bind to the cells’ outer membranes, creating holes in those membranes and killing the cells.

Publishing in the journal Nature online March 4, the new study showed that bacteria-exposed cells died on their own but lived only when toxin-absorbing exosomes were present.

Researchers say their latest findings show that this cell defense system is common among mammals, including humans, and may help explain why as many as one-fifth of Americans have community-based MRSA bacteria on their body yet very few, no more than 1 in 10,000, die from infection by it.

“Exosomes act much like a sponge, preventing the toxins for a time from attacking the cell, while toxins that are not corralled are left to burrow through cell membranes,” says study co-senior investigator Ken Cadwell, Ph.D. “This defense mechanism also buys some time for other widely recognized immune defenses, such as bacteria-attacking T cells, or antibodies, to kick in and fight the infection directly,” adds Cadwell, an associate professor at NYU Langone Health and its Skirball Institute for Biomolecular Medicine.

Cadwell says many disease-carrying pathogens, such as bacteria and viruses, initially target cells’ outer membranes, so the NYU team plans to investigate whether similar, generic “sponge-like” exosomes exist and take defensive action in other infections.

According to study co-senior investigator Victor J. Torres, Ph.D., the C.V. Starr Associate Professor of Microbiology at NYU Langone, the team’s results not only add knowledge of mammalian defenses against infection, but also suggest new strategies for strengthening the immune system, either by injecting artificial, exosome-like vesicles into the body to soak up toxins or by boosting exosome production to ramp up the body’s defenses.

The NYU researchers based their latest experiments on their previous work showing how bacterial toxins bind to cells during an infection. One earlier finding was that a specific protein called ATG16L1 was always present in cells that lived longer or survived infection. However, cells that lacked ATG16L1 all died from infection. ATG16L1, they say, is a known autophagy protein, acting as a key component in molecules involved in enveloping cellular waste so it can be broken down and disposed of. The researchers say the action of exosomes outside of cells “mirrors” this autophagy/ATG16L1 waste removal pathway observed inside cells.

For the new study, researchers injected MRSA into healthy mice and doubled how long and how many mice lived by fortifying the animals with injections of exosomes extracted from mice infected with the same bacterium. Normal mice injected with MRSA all died.