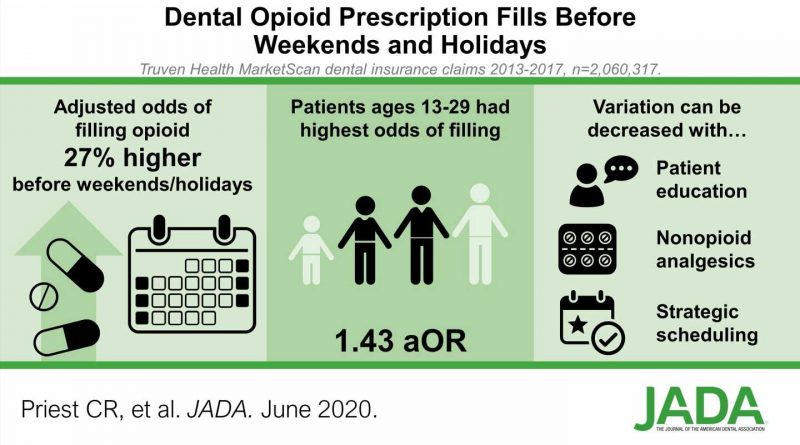 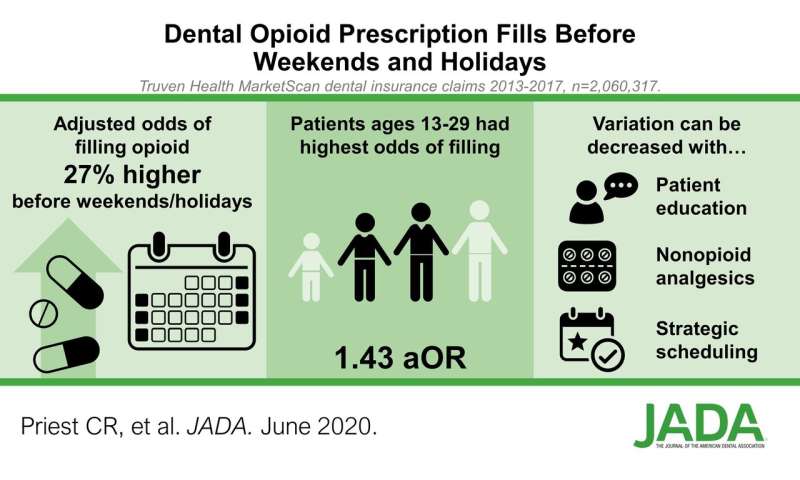 As dentists and their teams across America get back to their regular schedules after a sharp COVID-19-related reduction, a new study shows a key opportunity to reduce the use of opioid painkillers by their patients.

The analysis of four years’ worth of data from two million patients show that those who had dental procedures on a Friday or a day before a holiday were much more likely to fill a prescription for an opioid than other patients.

Teens and young adults were the most likely to get opioids, which were likely prescribed in order to get them through the weekend or holiday break without needing to contact the dentist for pain care.

One in five of the patients, all between the ages of 13 and 64, filled a prescription for an opioid, even though non-opioid pain medications are equally effective at controlling pain and have lower risks.

Those who had pre-weekend or pre-holiday procedures were 27% more likely to pick up an opioid prescription. If they were teens or young adults, they were 43% more likely than older patients to do so.

The new findings, reported in the Journal of the American Dental Association by a team from the University of Michigan, build on prior work showing overprescribing of opioids by dentists with no increase in pain relief or patient satisfaction .

The rate of weekend and holiday opioid prescription-filling by young people is especially troubling because of previous work showing that those who get opioids after getting their wisdom teeth out are nearly three times as likely to keep refilling the prescription long after their mouths should have healed.

“Variation in opioid prescription fills may put some patients at increased risk,” says Caitlin Priest, the U-M Medical School student who led the analysis as part of the Michigan Opioid Prescribing Engagement Network team. “Now that we understand that dental opioid prescription fills were increased on Fridays and before holidays, we can create and disseminate best practices to avoid unnecessary prescribing.”

Just over half of the patients whose records were analyzed had their dental procedure on an emergency basis. But the rest were scheduled—one-fifth of them on Fridays and the days before holidays.

Half of the patients who filled an opioid prescription had had scheduled surgical tooth extractions, but the pre-weekend and pre-holiday increase was seen across all 11 dental procedures studied.

This suggests multiple opportunities to reduce unneeded opioid prescribing, says Romesh Nalliah, M.H.C.M., D.D.S., the associate dean for patient services at the U-M School of Dentistry and a member of the study team. He notes that patients may seek Friday and pre-holiday appointments for their scheduled procedures to avoid missing work as they recover.

“The significance of our study is that, with the help of big data, it begins to unpack potentially harmful opioid prescribing trends that were not previously understood,” he says. “In the event that we have particular concerns about a given case or patient, we can more deliberately book surgeries when we are available to follow-up.”

The senior author of the paper, Chad Brummett, M.D., co-directs Michigan OPEN, which has published evidence-based guidelines for opioid prescribing for acute pain caused by many types of procedures and operations. He is also director of pain research in the Department of Anesthesiology at Michigan Medicine, U-M’s academic medical center.