Home » Health News » Saved from choking to death by my daughters: Do you know what to do?

Saved from choking to death … by my daughters: It can happen to any of us — and especially older people. So would you know what to do?

Within seconds of putting a piece of beef in her mouth, Viki Spambo knew she was in trouble.

She had sliced a small chunk of meat from the cooked joint to see if it was medium rare, the way she liked it. But as soon as she swallowed it, she was unable to breathe. She was choking.

The meat had gone down her windpipe — which takes air to the lungs — rather than the gullet, through which food travels to the stomach. Her airway was blocked.

Viki knew she had to dislodge the meat to survive. If the windpipe is blocked, cutting off air to the lungs and oxygen to the heart, patients can quickly lose consciousness and suffer a heart attack. Within minutes, it can be fatal. 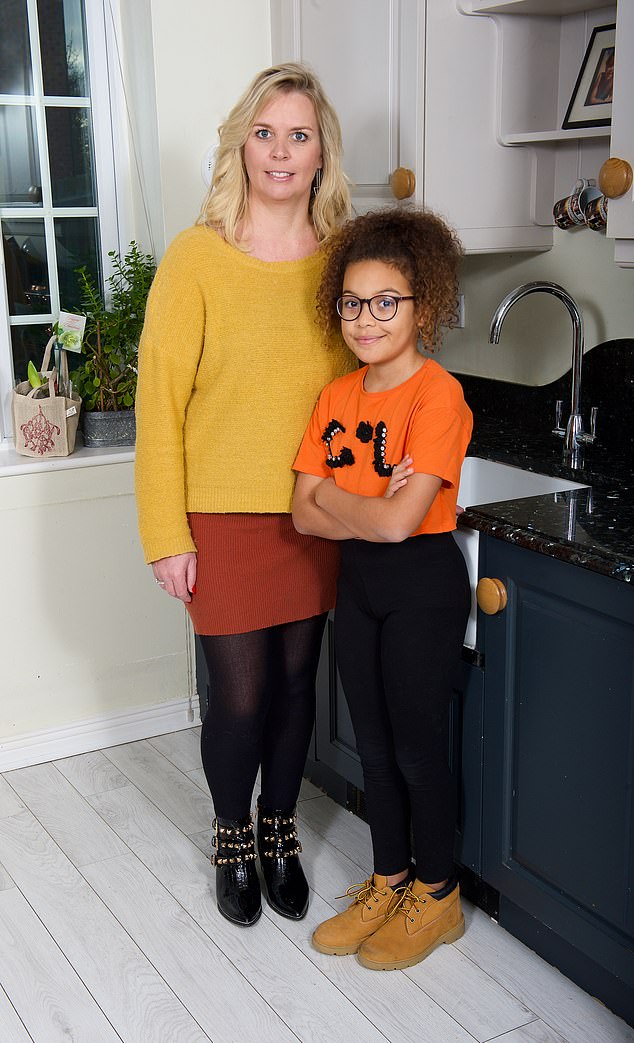 Viki Spambo and her daughter Holly. Nurse Viki almost choked on a piece of beef but was saved by her two daughters Olivia age 13 and Holly age 10. The girls had learnt what to do from the St John Ambulance app

‘I tried making myself sick and was trying to cough to dislodge the meat, but nothing was working,’ says Viki, 40, a nurse from the Wirral.

‘I knew panicking would only make it worse, but I was very scared. Within seconds of swallowing, I couldn’t breathe and I knew I was in trouble.’

‘I staggered into the hallway holding a knife, and ran the blade against the bannisters to make noise so my daughters could hear it upstairs,’ says Viki.

‘Within seconds, Holly came out of her room, and when she saw me unable to speak and breathe, she called an ambulance and her sister to help.’

As a nurse, Viki had taught her daughters the importance of first aid.

‘Initially, the girls both froze because I was going blue and making a horrible noise as I fought for breath,’ says Viki.

‘They were screaming and crying at the top of the stairs, but then something kicked in — Olivia remembered what to do and she ran down and gave some mighty slaps to my back.’

After the eighth blow, the meat dislodged, ‘and all of a sudden I could breathe again’, says Viki. ‘It had been just less than two minutes — but felt like a lot longer.

‘The girls and I just sat on the floor and cried and hugged each other. I felt very lucky to be alive.’

Viki is one of tens of thousands of people who need medical assistance for choking each year.

Figures from the London Ambulance Service show it received 1,916 calls for choking in 2016 — an average of five call-outs a day.

And while most patients are successfully treated, 398 people died from choking in England and Wales in 2017, according to the Office for National Statistics, and it’s a similar number every year.

Although choking is often associated with young children, because they like to put small objects in their mouths, they are not the only ones at high risk.

An analysis of the London Ambulance Service figures, published in 2017, found that, as well as young children, it was the elderly who were at greatest risk of choking.

Office for National Statistics figures paint a similar story, with three-quarters of deaths from choking among the over-65s, and 85 per cent caused by food.

THE VITAL FIRST AID SKILLS THAT COULD SAVE A LIFE

If someone is choking, you need to increase the pressure inside their chest to help expel the obstruction

If someone is choking, you need to increase the pressure inside their chest to help expel the obstruction — in effect, stimulating an artificial cough by putting pressure on the diaphragm.

In adults, this is done by giving five sharp blows between the shoulder blades with the heel of the hand, checking after each one to see if the object has dislodged.

If not, give five abdominal thrusts. Stand behind the person and put your arms around their waist. Make a fist with one hand, position it slightly above the belly button and grasp the fist with the other hand, then press hard into the abdomen with a quick, upward thrust. With both actions, the person should be leaning forward.

In babies under one year old, give the back blows while holding them over your lap, supporting their head and neck. If this doesn’t work, support the baby in a head-down position and give five chest compressions, checking after each to see if the obstruction has cleared. These can be repeated several times.

If the airway is still blocked, you should call an ambulance.

Dr Lynn Thomas, medical director of St John Ambulance, agrees: ‘People always think of choking in children, but it is a bigger problem among the elderly, particularly in hospitals and nursing homes.

‘Food is usually the problem and choking can occur for several reasons, including people putting too much food in their mouths, not chewing it enough and, in some, the swallowing reflex has become less efficient with age.’

Older people are also at greater risk of the swallowing mechanism malfunctioning because of other medical issues that make chewing or swallowing more difficult, such as dementia, neurological or respiratory problems or stroke.

They also produce less saliva, which can make dry foods difficult to swallow.

To avoid choking, you should chew food properly and have water on hand to help wash it down. ‘Then, even if it does go down the wrong way, it is a lot less likely to cause a complete obstruction,’ says Dr Thomas.

Care home staff also need to be able to recognise the signs of swallowing difficulties, says Lesley Carter of the charity Age UK, adding that some staff are not adequately trained. 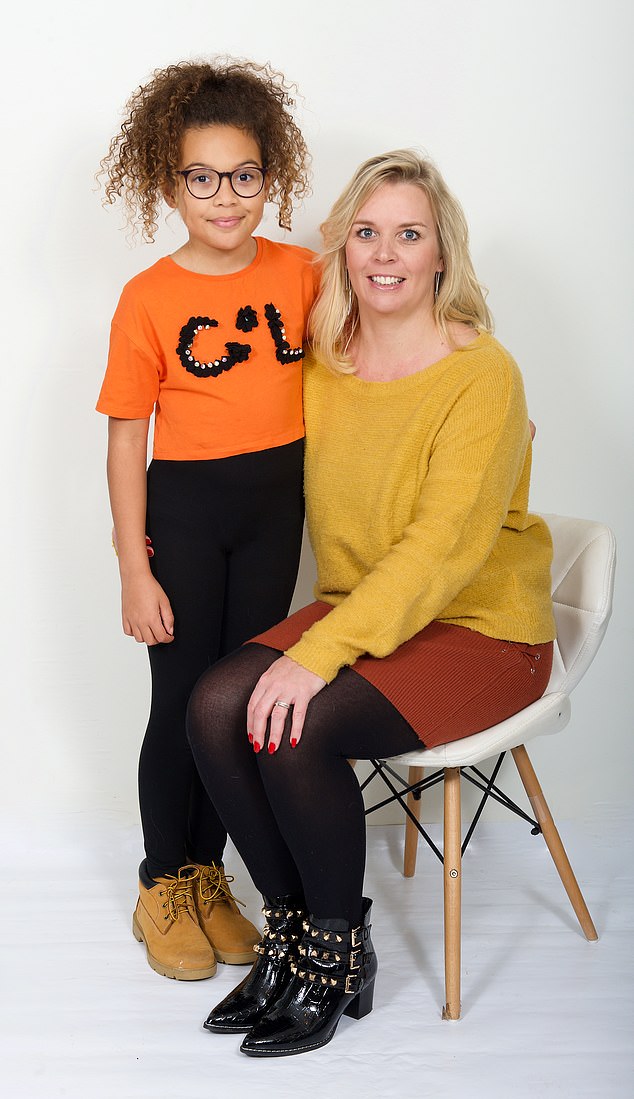 To avoid choking, you should chew food properly and have water on hand to help wash it down. Pictured: Viki Spambo and her daughter Holly

‘They need the training and skills to cope with a choking emergency,’ she says.

‘And there needs to be enough care staff, too, so if older people are at risk, they get the supervision and help they need.’

When someone is choking, the first step is to work out what is happening and why, says Adam Benson Clarke, of Resuscitation Council UK, a professional body that draws up resuscitation guidelines and provides training.

‘The context provides important clues,’ he adds. ‘Is it a mealtime or has a child been playing with small objects?

‘People who are choking often go quiet, they may look distressed or be trying to cough.

‘If the obstruction is only partial, the person may be able to speak, cough and breathe. In this case, encourage them to stay calm and cough to clear the obstruction.

‘However, if the airway is completely blocked, breathing will be very difficult or impossible.’

To clear the airway, you must increase the pressure inside the chest to help it expel the obstruction with back slaps and chest compressions (see box, below) — in effect, stimulating an artificial cough by putting pressure on the diaphragm (the muscle that separates the chest and abdomen).

‘People shouldn’t be worried about hurting someone,’ says Adam Benson Clarke. ‘At worst, they may be a bit sore afterwards.’

Since choking two months ago, Viki has had a trapped nerve and stiffness in the neck caused by muscle strain from trying to be sick, and hoarseness caused by inflammation to the vocal cords from retching. What has been harder to overcome is the trauma of what happened.

‘The first few nights afterwards, Paul said I was crying in my sleep as I relived it,’ says Viki. ‘It was the most horrendous experience. I thought I was going to die.

‘I got through it thanks to my daughters’ swift action and I am so proud of them.

‘I would encourage everyone — adults and children — to learn first aid. Even a little knowledge can make a huge difference.’