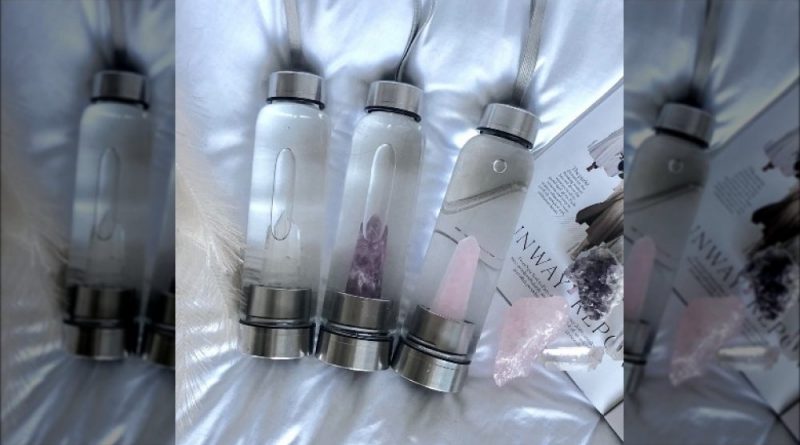 There are numerous claims that crystals and gemstones have been a part of natural healing for millennia, but these ideas don’t have much traction in modern medicine, where doctors and researchers have dismissed the idea as pseudoscience mainly because no studies or research have shown that they actually work (via LiveScience). Even so, crystal enthusiasts have added one more gadget to their alternative healing arsenal: glass water bottles with high-energy crystals that are meant to infuse the water that is poured into the vessel.

The glass water bottles that have high energy crystals in them are without a doubt a joy to look at, simply because they are gorgeous. But does drinking water out of these bottles actually do anything for you? Byrdie spoke to naturopathic doctor Kate Denniston, who says she hasn’t seen anything to show that drinking crystal-infused water actually comes with any actual health benefits, but she’s not prepared to discount them just yet. “There’s a lot we don’t know,” she explained. “If someone thinks they are getting health benefits from drinking crystal-infused water, they likely are.”

Cystal-infused water may benefit because it delivers a placebo effect

Those who feel better after drinking crystal-infused water may be demonstrating a placebo effect, which is actually scientifically proven to play a role in helping people feel better. In one study, reported in Nature, scientists showed that patients didn’t just pretend they were better because they had taken a placebo — their brains actually registered a physical change that indicated they had benefited from taking something that they believed would help them.

Placebo effects aside, if crystal-infused water bottles help believers drink more water, then they would have done what they are meant to do. Dietitian Keri Gans tells Shape, “Perhaps there’s a mental effect; but there’s nothing physical going on here. I’m a huge yogi, but if they were promoting this in my yoga studio I would laugh. On the flip side, I can’t find any harm associated with crystal-infused water. And anything that gets a person to drink more water I’m a fan of!”

The downside to these potentially magical vessels? They’ll set you back a pretty penny. One water bottle for sale at Neiman Marcus that promises to “restructure your water using the power of gemstones, while also boosting pH and oxygenation” sells for a cool $98.