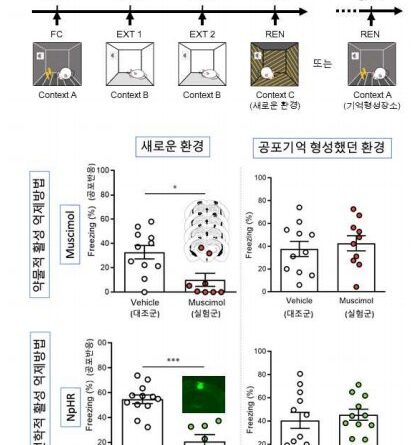 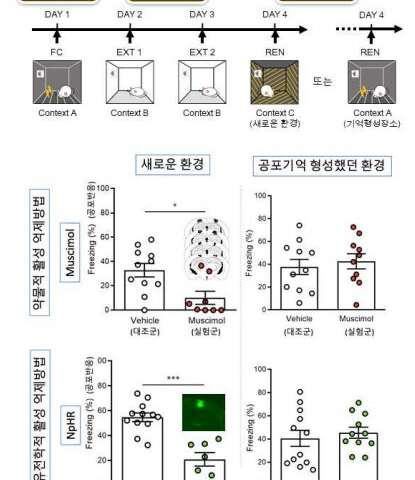 The posterior parietal cortex (PPC) is a part of the parietal lobe located in the upper-rear part of the brain and is related to high-level cognitive functions of the brain, including spatial reasoning and decision-making. The findings were published in the February issue of the international scientific journal Molecular Brain.

Posttraumatic stress disorder (PTSD) is a mental health condition where a person exposed to traumatic events such as severe accidents or violence repeatedly suffers from mental or physical distress. PTSD patients experience chronic distress because a mere visit to a place that reminds them of their trauma can result in relapse. For instance, some survivors of national disasters, such as the Sewol ferry incident and the Daegu subway fire, can no longer board a ship or are reluctant to use the subway in another city.

A KBRI research team has discovered, for the first time, that PPC is associated with fear renewal in a novel context.

In this study, fear memory was produced in the form of associative memory through the simultaneous use of auditory and electric stimuli. This memory was a conditioned memory as shown in Pavlov’s experiment with dogs, which salivate in response to bell ringings after several repetitions of being fed while bell ringing.

The research team exposed mice simultaneously to sound and electric shock in order to create an auditory fear memory, and then exposed them again to the same sound in a novel context.

The present study has proved that fear renewal in a novel context requires the activation of the PPC. The findings also suggest that, among regions of the cerebral cortex that perform high-level cognitive tasks (e.g. perception, thinking and memorizing), the PPC plays a crucial role in spatial reasoning and decision-making.

Dr. Ja Wook Koo and Dr. Sukwon Lee of KBRI stated that the research team “discovered a new role for the PPC that had previously not been fully understood,” and that they hoped to “help researchers develop treatment strategies needed to prevent fear renewal from occurring in patients with PTSD and fear-related disorders.”