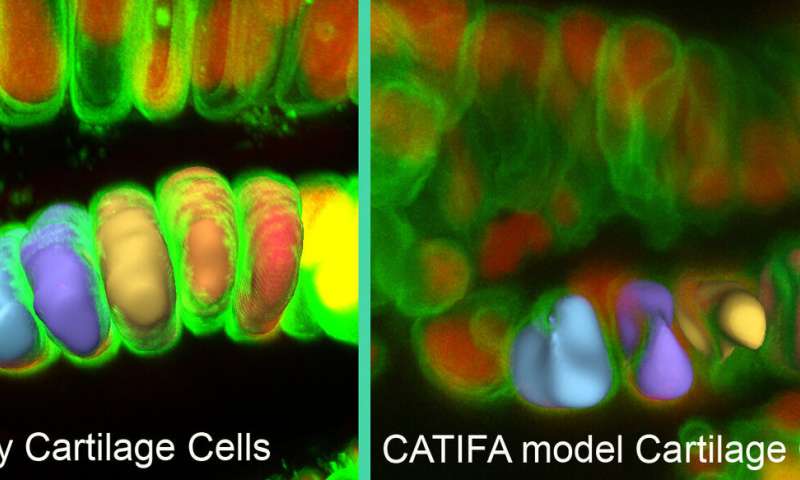 Studies that started in zebrafish have now pointed to a role for collagen secretion in a wide variety of clinical symptoms—and in a newly identified genetic syndrome.

Ela Knapik, MD, associate professor of Medicine at Vanderbilt University Medical Center, and her colleagues discovered the syndrome caused by mutation of a single gene and named it CATIFA, an acronym for its core symptoms: cleft palate, cataracts, tooth abnormality, intellectual disability, facial dysmorphism and ADHD.

The study, reported Jan. 13 in Nature Medicine, combined three sources of information: a zebrafish model, a pediatric genetic disease and a database of electronic health records linked to a DNA biobank.

“Each of these three data sources has its own advantages and shortcomings for disease discovery,” said Knapik, who is also associate professor of Cell and Developmental Biology at Vanderbilt University. “I thought, why don’t we use them concurrently.”

Knapik and her team were exploring the function of a gene called ric1 in zebrafish. They knew that mutation of ric1 disrupted collagen secretion and caused craniofacial and other skeletal defects in fish.

They learned that another group of investigators had reported a mutation in the RIC1 gene (the human version of the zebrafish ric1 gene) in multiple children from a single family who had pediatric cataracts. Knapik’s team evaluated the zebrafish for cataracts, but didn’t find any.

The story might have ended there, but Knapik was intrigued. Did the children have other symptoms that hadn’t been characterized because their most pressing problem was cataracts? What might those symptoms be?

To uncover additional symptoms, Knapik and her colleagues in the Vanderbilt Genetics Institute turned to BioVU, Vanderbilt’s DNA biobank and database of de-identified electronic health records.

The list they generated for reduced RIC1 expression matched characteristics Knapik and her team observed in the fish, she said. “I knew at that moment that we needed more information about the patients with RIC1 mutation and pediatric cataracts.”

The team in Saudi Arabia that had reported the patients with RIC1 mutation agreed to reevaluate those patients for the BioVU-derived list of symptoms. Knapik said the investigators were surprised to find the constellation of symptoms in their patients: eight children from two related families.

The symptoms of the new disease, CATIFA, can be explained by loss of collagen function, Knapik said. Collagen is the main structural component of the extracellular matrix—the “mortar” between the cellular “bricks.”

Using zebrafish, Knapik and her team were able to determine that the RIC1 protein is part of the cellular machinery that processes and ships collagen out of the cell.

“In the absence of RIC1, you don’t get the collagen shipment, and you don’t have matrix,” Knapik said. “That leads to the broad spectrum of symptoms that we find in the electronic health records of adults and in the children with CATIFA.”

The findings support the concept of a continuum between the individual symptoms in a rare, Mendelian disease—a disease caused by mutation of a single gene—and the complex traits of common diseases, Knapik said. Knowing the mechanistic underpinning for the disease and the symptoms that may arise will improve and personalize care for children with CATIFA and for adults with similar symptoms caused by less efficient activity of RIC1, Knapik added.

The study suggests a new paradigm for accelerating the discovery process for disease mechanisms, Knapik said.