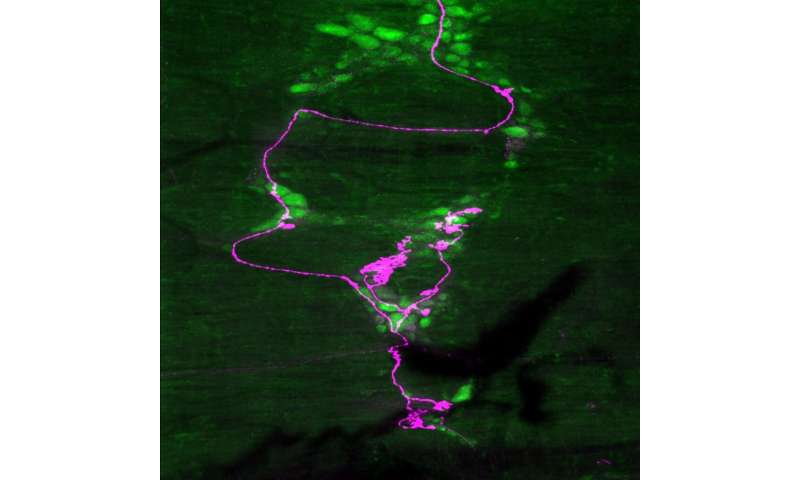 We commonly think a full stomach is what tells us to stop eating, but it may be that a stretched intestine plays an even bigger role in making us feel sated, according to new laboratory research led by UC San Francisco neuroscientist Zachary Knight, Ph.D.

You may not believe it, especially heading into the holiday season, but your body is remarkably good at keeping your weight within an extremely narrow range in the long run, which it does by balancing how much you eat with how much energy you expend each day.

The extensive web of nerve endings lining your gut plays an important role in controlling how much you eat by monitoring the contents of the stomach and intestine and then sending signals back to the brain that boost or lower your appetite. Most scientists believe this feedback involves hormone-sensitive nerve endings in the gut that track the nutrients you consume and calculate when you’ve had enough, but no one has yet tracked down the exact type of neurons that convey these signals to the brain.

“Given how central eating is to our lives, it is remarkable that we still don’t understand how our bodies know to stop being hungry when we eat food,” said Knight, a Howard Hughes Medical Institute Investigator and associate professor in the Department of Physiology at UCSF.

One of the challenges to answering this question is that the thousands of sensory nerves involved in collecting sensory information from the stomach and intestine come in many different types, yet all of them transmit messages back to the brain via the same giant bundle, which is called the vagus nerve. Scientists can either block or stimulate the activity of this nerve bundle and change animals’ appetites, but how to figure out which vagal nerve endings in particular were responsible for the change?

To resolve this mystery, the Knight lab team, led by postdoctoral researcher Ling Bai, Ph.D., comprehensively mapped the molecular and anatomical identities of the vagal sensory cell types neurons innervating the stomach and intestine. This new map, published November 14, 2019 in Cell, allowed the researchers to selectively stimulate different types of vagal neurons in mice, revealing that intestinal stretch sensors are uniquely able to stop even hungry mice from wanting to eat.

Scientists had previously classified gut sensory neurons into three types based on the anatomy of their nerve endings: mucosal endings have nerve terminals that line the inner layer of the gut and detect hormones that reflect nutrient absorption; IGLEs (intraganglionic laminar arrays) have nerve endings in the layers of muscle that surround the stomach and intestine and sense physical stretching of the gut; and IMAs (intramuscular arrays), whose function is still not known, but may also sense stretching.

“The vagus nerve is the major neural pathway that transmits information from gut to brain, but the identities and functions of the specific neurons that are sending these signals were still poorly understood,” Bai said. “We decided to use modern genetic techniques to systematically characterize the cell types that make up this pathway for the first time.”

Using these techniques, Bai and colleagues discovered that mucosal endings actually come in many different varieties—four of which the researchers studied in detail. Some of these were mainly found in the stomach and others mainly in different parts of the intestines, with each type specialized to sense a particular combination of nutrient-related hormones. Stretch-sensitive IGLEs also came in at least two different types, the researchers found, one mainly in the stomach and the other mainly in the intestine.

To learn how these different nerve types in the gut control appetite, Bai and her team used a technique called optogenetics, which involves genetically engineering specific groups of neurons in a way that allows them be selectively stimulated by light—in this case to test their ability to make hungry mice stop eating.

The researchers expected that stimulating the IGLE neurons that sense stomach stretch would make animals stop eating, and this is just what they found. But when they turned to stimulating the different types of hormone-sensing mucosal endings in the intestine that had been hypothesized to control appetite, they found that none of these were able to impact animals’ feeding at all. Instead, to the researchers’ surprise, they found that stimulating IGLE stretch receptors in the intestine proved much more powerful at eliminating the appetites of the hungry mice than even the stomach stretch receptors.

“This was quite unexpected, because the dogma in the field for decades has been that stomach stretch receptors sense the volume of food being eaten and the intestinal hormone receptors sense its energy content,” Bai said.

These results raise important questions about how these stretch receptors are normally activated during feeding and how they might be manipulated to treat obesity. The findings also suggest a potential explanation for why bariatric surgery—performed to treat extreme obesity by reducing the size of the gut—is so mysteriously effective at promoting long-term appetite and weight reduction.

Researchers have suspected for some time that one reason this surgery is so surprisingly effective at blocking hunger is that it causes food to pass very rapidly from the stomach into the intestine, but the mechanism has been unknown. The new findings suggest an answer: that rapidly incoming food stretches the intestine, thereby activating the vagal stretch sensors and powerfully blocking feeding.

“Identifying the mechanism by which bariatric surgery causes weight loss is one of the biggest unsolved problems in the study of metabolic disease, and so it is exciting that our work could suggest a fundamentally new mechanism for this procedure,” Knight said. “At present, however, this idea is a hypothesis that still needs to be tested.”

Findings Add to New Science of Hunger and Thirst

Knight, a member of the UCSF Weill Institute for Neurosciences and UCSF Kavli Institute for Fundamental Neuroscience, investigates how the brain senses the needs of the body and then generates specific behaviors to restore physiologic balance—sometimes in surprising ways. In just the last few years, his lab has upended long-held textbook theories of hunger and thirst.

It had been thought, for example, that neurons in the brain motivate eating and drinking by reacting to the body’s internal nutrient and water balance. But Knight’s team, by precisely recording the activity of specific neurons in mice, found that hunger neurons turn off as soon an animal sees or smells food, seeming to anticipate food intake. Similarly, thirst neurons turn off at the first taste of water, long before any change in the body’s fluid balance. Knight’s team has also identified warm-sensing neurons that control thermoregulation, including an animal’s responses to heat. Most recently, his lab has turned its attention to the gut, exploring how nutrients, salt, and stretch in the stomach and intestine influence the neurons that control eating and drinking.