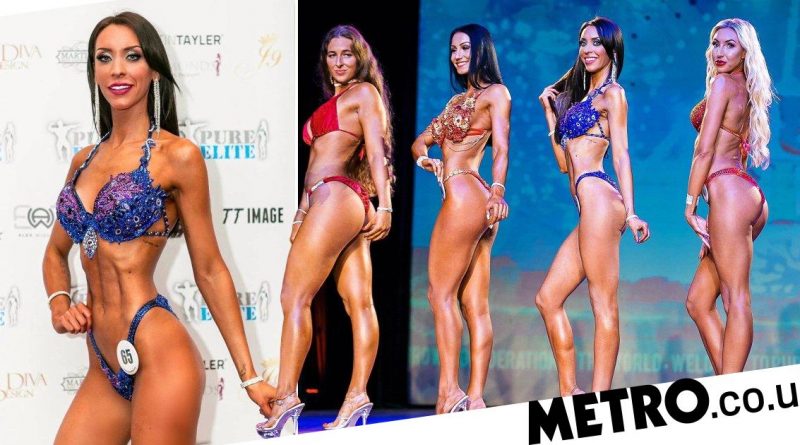 Not so long ago, Rebecca was too afraid to leave her house.

Struggling with daily panic attacks, anxiety and all-consuming agoraphobia, she was trapped in a world of fear and couldn’t see a way out of it.

But now, Rebecca, from Essex, competes on stage in bikini bodybuilding competitions – and she says fitness turned her life around.

‘Fitness brings me a sense of purpose, it makes me feel so positive and happy,’ Rebecca tells Metro.co.uk. ‘I get the most incredible endorphins in my body when working out, and most importantly it gives me a healthy mindset.

‘It has helped my mental health in a huge way. I can guarantee if I’m feeling low or anxious, a session in the gym will perk me up. Don’t get me wrong I still suffer with it and it has not cured me, but I now have a better understanding of it and have gained some great coping skills.’

Rebecca’s mental health problems began when she was just seven years old. A couple of close family members died in quick succession, and Rebecca was overwhelmed by fears of death.

‘I had never thought about death before and was terrified at the thought of it, to the point where I would have to have constant reassurance,’ she says. ‘Every night I went to bed from my mum asking her, “am I going to die tonight?” to which she would reply, “no darling you’re going to be fine.” If I didn’t get this reassurance I would have a panic attack.’

Her father was diagnosed with throat cancer when she was 13. He was ill for three years and went into remission, but sadly the cancer returned in his lungs a few years later and he passed away when Rebecca was 20.

‘In those seven years, I watched him suffer and deteriorate until the day he actually passed away. It really affected me and my mental health, and I still, to this day, struggle with his death.’

The anxiety escalated to full-blown agoraphobia, and Rebecca felt utter panic every time she left the house.

‘Everyday life become a massive struggle for me,’ she explains. ‘Things that would never even cross your mind, like going out to restaurants, socialising out with friends in pubs and bars. I couldn’t get on the tube any longer and I still have to hire a car rather than use the underground.’

She couldn’t even go to the hairdressers – the idea of being in one place for so long was unbearable.

‘I knew that the moment I was sat in that chair in the salon I would feel trapped because I didn’t have the control to get up and run outside for air if I needed it. I would also worry about what people would think about my behaviour and it would really panic me to the point where I have a panic attack and pass out.

‘That then causes you to associate fear with whatever place where you had your episode, so you avoid it out of fear it will happen again. It just turns into a nasty vicious circle.’

Things took a turn for the worse when Rebecca’s beloved French Bulldog Albie was diagnosed with terminal cancer at just three years old.

‘I had a bit of a breakdown,’ says Rebecca. ‘It brought back a lot of painful memories from losing my dad, and all the suffering.’

To give Albie the best chance of a life, Rebecca made the difficult decision to put him on chemotherapy. But the treatment was gruelling and Rebecca turned to fitness to help her get through it mentally.

‘Going to the gym was really helping. So, I decided I needed to have a goal to work towards to distract me from everything that was going on.

‘I decided to really give it my all and compete, and I entered myself in for the Pure Elite fitness and bikini competition – which was in April 2019, giving me time to really work on my body.’

‘It really knocked me back,’ she says. ‘I was utterly devastated, but I had come so far with my training and progressed so well, I pushed through. Being in a routine and being so disciplined gave me a sense of control, which really helped even though I felt deep down that my life was spiralling out of control.’

A mixture of talking therapy and hypnotherapy really helped Rebecca to develop strategies to overcome her anxieties and ultimately helped her to compete in competitions.

‘I still use safety behaviours,’ Rebecca explains. ‘So, if I take certain things with me in my bag, like a handheld fan, my asthma pump, some water and lots of mints, in a strange way it makes me feel a bit safer knowing I have things to help me if I panic or feel sick and dizzy.

‘I drive literally everywhere, so I’m safe in my own car and believe it or not, actually being up on that stage is something I thrive on. I feel like I go into character, a bit like an actress, and I can be this different person and take on a different persona.

‘The buzz you get from it overcomes all my fears in that moment, it’s so hard to explain but it’s like the best medicine I’ve ever had.

‘I’ve been on different types of antidepressants and anxiety meds before and have had some bad side-effects and some I just haven’t got along with, but the buzz and feeling you get from being up on that stage beats any prescription drug in my opinion.’

Fitness has helped Rebecca regain control over her life. Now, she has direction, she knows what she wants to achieve, and she doesn’t let fear stand in her way anymore.

‘I start my PT training course in the next few weeks,’ she says. ‘This will be the start of a new chapter in my life, something I never thought was possible. So I am so grateful for this.’

Rebecca’s professional competition debut is in April this year. Until now, she has only competed in the amateur category, but she feels ready for the step up.

‘The standard will be a lot higher,’ she says. ‘I have the odd worrying thought, but I think that’s natural being as I’m an anxious person – even the most non-anxious person would feel it too.

‘It’s a competition and although the taking part is a massive achievement, you’re always wanting to place or win, so that’s always in the back of my mind. But I know how fantastic my last competition made me feel and how I proved to myself that I can do it, so the other half of me is excited about this.’

Rebecca’s ultimate goal is to get an IFBB pro card and then win a place to compete at Mr Olympia or the Arnold classic – world-famous international bodybuilding competition.

‘A strong women to me is perseverant,’ says Rebecca. ‘She will get up every time she falls and dust herself off. She’s a fighter, she is balanced, and she isn’t afraid to voice her opinions and speak the truth.’

Strong Women is a weekly series that champions diversity in the world of sport and fitness.

A Sport England study found that 40% of women were avoiding physical activity due to a fear of judgement.

But, contrary to the limited images we so often see, women of any age, size, race or ability can be active and enjoy sport and fitness.

We hope that by normalising diverse depictions of women who are fit, strong and love their bodies, we will empower all women to shed their self-consciousness when it comes to getting active.

Each week we talk to women who are redefining what it means to be strong and achieving incredible things.